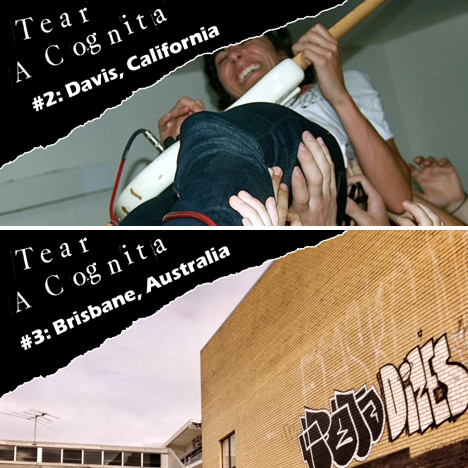 Two New Installments in the Tear A Cognita Series : Focusing on Davis, CA and Brisbane, AUS

Tear A Cognita is a series of regional compilations put together by active participants in the community they're representing. These two installments focus on Davis, California and Brisbane, Queensland, Australia. If you're interested in what it takes to compile one for your own town, drop us a line at /contact

Davis is a college town tucked between Sacramento and San Francisco. The longstanding freeform radio station KDVS has helped put, and keep, Davis on the map as a good in-between stop for bands touring the West Coast and while many of the shows revolve around at least one touring band, there’s always new local bands springing up here and there. Locals tend to be a bit all over the place as far as genres go and it’s not uncommon for a hardcore band, a weirdo noise duo, and a fun electro-pop act to share a bill, somehow working together in just the right weird way. There’s a strong house show scene and a few DIY venues with (almost) a house-show vibe and like any scene that relies heavily on living rooms instead of stages there tends to be some ebb and flow. From no longer existent epic spots like the Dam Haus (which had a 20+ year run and can be seen in Lightning Bolt’s The Power of Salad tour documentary) to great “burn bright, burn quick” spots like Haussler and Pole Line (aka Fuck Dungeon) to ongoing fixtures like Chillanova and Robot Rocket Residence to new houses like The Morgue, and DIY venues like Third Space Art Collective, underground music here is kept alive and kicking by new and old faces who, at the core, just love making shit happen. This compilation is a small slice of Davis area locals. Some are recently gone, some are soon to go, some are here to stay for god knows how long. The scene will likely outlast us all and there will (hopefully) always be plenty of smiling faces crowdsurfing in living rooms. –Evan 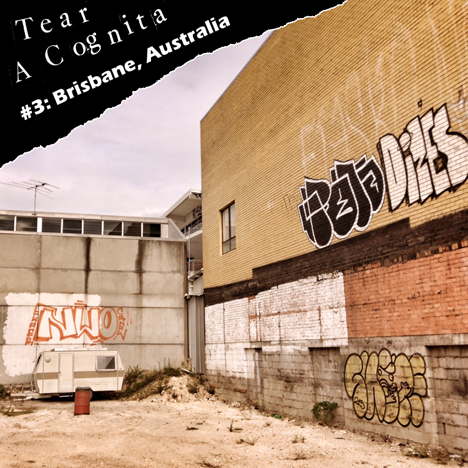 Brisbane is a small subtropical city located in the state of Queensland, Australia. Home of The Saints, Brisbane’s punk and general music scene grew under the stifling conservatism and police brutality of the state government that held power for over twenty years from the late 1960s. Brisbane’s punk scene, forged in opposition to this, has left an indelible cultural impression – one of both resistance and unassuming humour. Today’s Brisbane punk has built upon and diversified from these beginnings. Being a small city, bands share members, share bills, and share venues; the shows are still held in the pubs, bowls clubs, and DIY spaces that remain. The city provides an ever interesting contrast of the lackadaisical atmosphere - one necessitated by the heat, humidity, and boredom - countered by the energetic aggression and enthusiasm of the bands and crowds; sweat and sticky floors a constant from past to present. –Justin