The crowd pressing against the stage of the Henry Fonda Theater was getting restless. After sitting through a half-hour set from Norwegian death punks, Amulet, then enduring an extended intermission, a chant went up in drunken anticipation.

As the red curtains were drawn to the sides of the stage, the apocalypse dudes strolled out, followed by their leader, the exquisitely vulgar Hank von Helvete. What followed was an hour and a half of unadulterated obsessions with blood, pizza and good, good head.

During the 1990s, Turbonegro provided a tight, comic-book alternative to grunge, old school punk and metal by stealing the best parts, adding a little fresh ink, and throwing the rest of the mess in the trash. Like the evisceral Italian movie director Pier Paolo Pasolini, Turbonegro reveled in shit, piss and courting offense in no uncertain terms. And somehow, like Pasolini, they made it – for lack of a better term – attractive, even beautiful in the most decadent manner imaginable.

Guitarist Euroboy possessed all the lowlife charm of Johnny Thunders (and twice the chops!); bassist Happy Tom looked like he’d been pulled straight out of a Tom of Finland sketch book; keyboardist/guitarist/pizza chef extraordinare Pol Pot Pomparius, guitarist Rune Rebellion and hooligan drummer Chris Summers were one of the most solid rhythm sections the 1970s never had the chance to see. And then there was singer Hank von Helvete, whose vintage Alice Cooper makeup, top hat, cane and grotesquely huge beer gut pushed the band to the outer limits of bad taste.

Like the New York Dolls, Turbonegro imploded due to the usual near fatal mix of drugs, nervous breakdowns and – officially at least – “religious differences.” During their five year absence, their myth grew and was fed by the tribute album, Alpha Motherfuckers featuring the likes of the Supersuckers, Therapy?, Nashville Pussy, Zeke and two dozen Scandinavian bands rarely heard on these shores. As much as the average tribute album sucks, this one stands out as a real testament to one of the most overlooked bands of the last ten years. 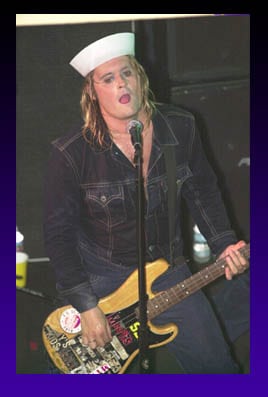 Here was a band steeped in rock’s most outlawed traditions; this is a band drawing from the unhinged insanity of the Stooges, the Dolls’ faux gay postering, the crass sexism of the Stranglers and – to quote Therapy’s Andrew James Caines – “the trash of Warhol … and the beautifully vulgar preening of early Bowie and Reed.”

Deceptively complex, part of the band’s charm is not knowing where the joke ends and the seriousness begins. There’s more than a hint of Spinal Tap lunacy at work here but anyone who would write them off as a joke doesn’t have a very broad frame of reference.

Oh sure, there’s some people who will never get it – a smattering of assholes with Skrewdriver patches on their jackets could be seen skulking about the Henry Fonda Theater. But what do you want? More than a few neo-Fascist types have historically had hard ons for pretty (or not-so-pretty) boys in lipstick.

From the first opening chords – scratch that, from the first “is my guitar tuned?” pickings – it was obvious that this was going to be a show that would push things over the top. First, the audience had to be re-educated, Ramones-style, with a trip “Back to Dungaree High,” neatly followed by the one-two-three jackhammer pseudo angst of “Selfdestructo Bust.” 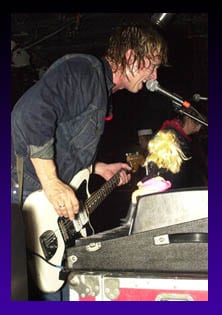 The band leaned heavily on material from their Apocalypse Dudes album (“Get It On,” “Don’t Say Motherfucker, Motherfucker,” “Prince of the Rodeo”) with occasional foray into tracks from the equally inspired Ass Cobra (“Midnight NAMBLA,” “Just Flesh,” “Denim Demon”). Newer material from the Scandinavian Leather album – like the arguably weaker “Sell Your Body to the Night” – was kept to a minimum.

Audience members directly in front of the stage were treated to an unexpected shower of gore as von Helvete proceeded to dump buckets of theatrical blood on their heads. Some people were obviously not terribly happy about paying good money for a show only to have their clothes ruined and they let the band know it. For a very brief moment, it seemed like the band genuinely regretted the stunt.

EDTANG AND THE CHOPS: Magic Tricks and Rolling Stone: CD