So I went to see Tulsawww.starcleaner.com/tulsa.htm (with CPC Gangbangs) at Hemlock http://www.hemlocktavern.com/ last Friday night and they were fucking awesome. Just altogether really good. I’d noticed that they played, amongst other places, at the Marked Men show awhile back, but had unfortunately missed them. I’ve been wanting to check them out for awhile now and I’m glad I got to on Friday!

From Oklahoma originally, Tulsa is a three piece with members who all sing, although the majority of the vocal duties go to the guitarist. He’s got a lovely, screechy voice (occasionally reminded me of Todd C. from Toys That Kill (as did the music at times)) and plays excellent rhythms. I even loved the guitar solos – one reason being, I guess, that they were not “solos” in the traditional, more metal sense, but more so the kind that just seem to be an extension of the rhythm. I loved them because they were weird and took unexpected turns. Really nice. Pretty high end, though; the whole show actually, it was killing my teeth. At one point the sound of the guitar totally reminded me of the very beginning intro (where it’s just the guitar) to that Toadies song “Plane Crash.”

Comparisons could be drawn to This Bike Is A Pipe Bomb I suppose, especially when they (male) guitarist and (female) bassist sang together, but it seemed to me they were a quite a bit less folky. I feel like the sound of the guitar was too noisy and scratchy (in a good way) to have that folk punk sound. And speaking of the bass, I thought it was really great: very sure and solid and energetic. The whole band was energetic, actually. The drums were also really sweet and had lots of interesting frills and trills.

Unfortunately, they tricked me and I thought they were done (silly me) so I missed an encore. Boo!

Outside, a bit of strangeness was afoot. Those of you familiar with the Hemlock in San Francisco surely know that the location offers up some odd neighborhood characters. There were a couple different people panhandling at once. One guy was in a wheelchair and just looked tired. Another asked me for some change and said that he barely had enough for coffee and a donut. When I felt a little chilly because of the brisk San Francisco night, I took care to remember that I dare not complain, as I’d be sleeping inside later on. A lot of people I know are totally fed up with the homeless folks in the city (there are a LOT), and I can see why, but it seems to me better to get fed up with the homeless situation rather than the people. Granted, some of the people are total loons and some of them can be threatening, but still. Anyway, another panhandler was singing some Stevie Wonder songs and he had a really nice voice. Then some dunk fool got escorted from the bar and he was (of course) all pissed off and defiant about it so the singing guy switched his tune to something he made up as he went along about how we should all relax and not cause trouble. A few minutes later another apparently homeless man arrived on the scene trying to sell a miniature iron. I thought this was really bizarre. It seemed to be made out of plastic, it was only a little bigger than the size of my hand, and it was an iron. Weird! Where does one come across that? The crazy thing was that when he was trying to sell it, he was touting it as a weapon rather than something that would make your clothes less wrinkly. He was saying how you could burn someone with it and they wouldn’t even know what hit them.

Wouldn’t even know what hit them, indeed.

Back inside, “Los Angeles” was playing on the (always free!) jukebox, and I reflected upon how Hemlock often has some really good shows. There are a ton of bands that play there that I’ve never heard (or even heard of), and I think if I had more time (and disposable income), I’d be inclined to check out a lot more of these unknown (to me) bands. 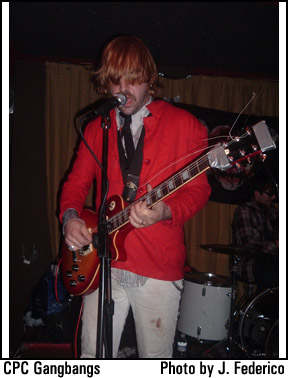 Meanwhile, CPC Gangbangs www.myspace.com/cpcgangbangs were coming on, so I headed back. I’m not crazy about this name, but couldn’t find much about it online (one page says it comes from “an urban-legend-type tale in which a friend murdered someone while high on PCP and was hauled away by the cops screaming “CPC! CPC!”). While looking however, I did find out that one of the singers was apparently in the Canadian cult-classic mockumentary Fubar (although I’ve never seen it).

So anyway, I was interested in checking them out. They’re from Montreal and on Swami Records, which, in my opinion, can often be relied upon to bring the rock. I noticed some of the band outside before they played and they seemed quite…..hmm, what is the word I’m looking for here? Quite excitable. Quite keyed up. When they began playing, it seemed that some of that “excitement” seeped onstage. To give you an idea of the dynamic early on, at one point a guy next to me in the crowd yelled, “More onstage bickering!”

I thought that was hilarious.

Because they certainly were bickering, the two guitarists. There was some yelling and profanity and even a bit of shoving at one point. Tempers and attitude were running high. However, it seemed to settle down after a couple of songs.

The band itself, I thought was pretty interesting. They were good. At times they had a super garage sound but then they would go into something totally psychedelic. A lot of their endings were quite built up, like some kind of long-winded jam band. I liked both of the singers’ (the two guitarists) voices, which were quite different. I couldn’t get over how much one of the guitarists looked like Jason Schwartzman from The Darjeeling Limited. Craziness. The drummer, meanwhile, looked like Devo in flannel.

They had some technical difficulties (busted bass drum pedal and two broken strings) that cleared out the crowd a little because they were taking awhile to resolve, but I stuck around. Towards the end of their set, the beginning of one of their songs, strangely (because it seems quite a different style of music), reminded me of Girls Vs. Boys. As I said earlier, an interesting band.