“So…my son asked me, ‘Dad, did you really have sex with a dead girl?’” laughed TSOL’s notorious vocalist Jack Grisham during a short break between songs. When Jack is onstage or being interviewed in any fashion, you can never be sure if he is telling the truth, or making up some outrageous story. But this one could very well be true. I hope it is. One can only imagine what it must be like to have punk rock legends as parents. TSOL is an OC original, and despite the many miles between its members, The True Sounds Of Liberty still gets together from time to time to resurrect the old-school death rocker in those of us who know and remember. The Briggs also put on one hell of a show, and the four vixens called Civet gave me the chills from start to finish. Sorry, I missed opening band Rous’s because it is way too expensive to drink inside the Galaxy, so we had to “tune up” before entering.

Civet was already onstage when my friends and I entered the venue, so I bolted directly to the front. These lovely and talented four punk ladies from LA are now one of my favorite bands. Damn! The band was already halfway through its set and I had waited weeks for this one. Pressing my way through the already sweaty and funk-smelling bodies, I found my spot directly in front of guitarist Susi Homewrecker for a complete and unobstructed eye and earful. Sure, the members of Civet are beautiful and sexy to behold, but this band is also gifted, loud, and wonderfully raw. The tough, sexy growl of lead vocalist/lead guitarist Liza Graves is abrasive and bold, but still distinctly feminine. I think this band is touching my spirit so deeply because many of its songs are about painful relationships and angry, but redemptive, break-ups… which is exactly where I am. We heard the majority of the cuts from the 2008 debut album, Hell Hath No Fury, such as the title cut, the thundering-harmonious ode to friendship “All I Want,” the scolding, back-off anthem “You Don’t Know Me,” and a few new songs, such as “Bad Girls” that will be on the new album that is due out in October. I got a kick out of watching the barely-teenage kid next to me stand there with his mouth wide open, reveling at the sight and sound of the musical erotic. Listen to this awesome band at: http://www.hell-cat.com/artists/artist/223/Civet 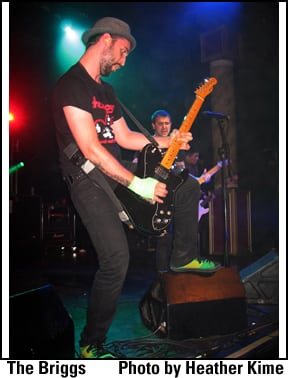 After the alluring ladies of Civet came four ordinary-looking dudes from Los Angeles called The Briggs. Wow. I got tired just watching them play. These guys exude uber-high energy from start to finish with songs that all feel urgent and stirring. Lead guitarist Jason Larocca absolutely shreds. His punk-metal leads are utterly riveting and he is very reminiscent of The Who’s Pete Townshend, with his windmill arm swinging and overall sense of personal bravado. The guy even looks a bit like the mod icon. The Briggs is not predominantly an Irish-influenced band, but I was often reminded of Dropkick Murphys and Flogging Molly with all that fist-pumping, sing-along, earsplitting camaraderie. Even though I couldn’t catch all the lyrics, it was obvious from the tone and emotion that a lot of work went into writing songs that had genuine meaning. The song “Not Alone” exemplifies this perfectly: “Somewhere in the feedback / there must be a message / stay just for today / together we say / you are not alone.” That’s fucking beautiful. Glancing to the right, I saw a thick line of devoted fans across the entire length of the stage blissfully singing along and bashing themselves silly. From my vantage point at the front corner of stage left, the crowd choruses were often so loud that it almost drowned out the amplified voices coming from the stage. During the rousing rendition of “This Is L.A.,” I actually felt a distinct feeling of So. Cal pride, even though living in or near Los Angeles is nowhere near a cool as the honorific tribute to the Briggs’ hometown. Honestly, the only bad thing I can say about this band is that they may be too happy. It almost seemed like they forgot to be angry. You can march along at: www.myspace.com/thebriggs 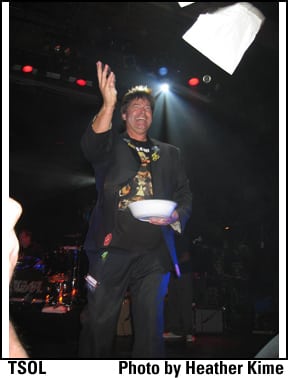 “What does TSOL mean?” asked my young newbie show guest. “The Scum of Long Beach” I joked. “No, it means, ‘The Sons of Lesbians’ I laughed. No response. She didn’t get the joke. “It means ‘True Sounds Of Liberty.’” She asked why the band is called that and I told her to listen and find out. As if on cue from me, smilin’ Jack and company burst out with “World War III.” The crowd went nuts for the anti-war/anti-draft classic, and I wondered if my petite young charge got the message. No pause between songs; “Dance with Me” erupted from the amplifiers and the song’s lyrics once again came to life. “Dance with me my dear / on a floor of bones and skulls / The music is our master / the devil controls our souls.” Beautiful. I turned to feel the wind generated by the rotating circle pit of adrenalin-charged weirdoes just as the song said, “Swirling and swirling / The music of our turning…” I love synchronicity. Soon after that, during one of Jack’s many extended monologues between songs, he went backstage and brought forth a big bowl of assorted candies. He then proceeded to throw big handfuls of individually wrapped sweets while making jokes about giving candy to children. He then took the time to dedicate the next song to his mother who may or may not have been in the audience. In my seasoned opinion, this song, “The Sounds of Laughter” is one of the greatest punk songs of all time. It perfectly captures the essence of what punk rock is supposed to be; angry but exultant, insane but calculated, frightening but exciting. What else? Somebody shouted out “Weathered Statues”! so they played that ethereal gothic ode to the futility of war and the certainty of its perpetuation. Of course, they played “Code Blue,” right at the end of the set. That was a given; an expectation. The encore consisted of “Wash Away,” which I mentally dedicated to my ex-fiancé, and “Politics.” Half the crowd had already left, the curtain call was lackadaisical, but we lucked—and got one anyway. Thank you Jack Grisham, Mike Roche, Ron Emory, Tiny Bubs, and Greg Kuehn…we are glad you still play the deep, dark, and often ugly songs that still resonate in our hearts.