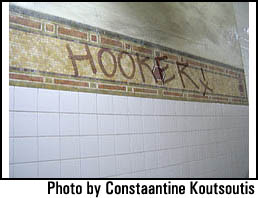 Let’s make one thing perfectly clear. I hate my job. I hate having to get up and take two trains and a bus to get to and from there. If I could, I’d write dumb stories and eat pizza all day, and go bowling or go to readings at bookstores to hit on indie girls every night.

And before you start writing to me about how I should get in line with every other twenty-something punk rocker out there, hold your horses. This isn’t necessarily a discourse on how I hate my job, but rather, what happens while I’m getting there. Hold on, I’ll explain.

Robert Levine, a writer at Rolling Stone, wrote an interesting article a few months ago (“The Death of High Fidelity”, December 27th, 2007) on the changing face of music recording technologies, which focused on how the ever-expanding usage of music in an almost strictly mp3 format has changed the way that music is recorded and mixed, with a focus on literal loudness. This way, music heard in such a compressed format is meant for listening not from a conventional stereo, but rather through the earbuds of an iPod, or through the speakers of a laptop computer. Increasing compression to gain loudness makes it easier to hear without having to crank up speaker/earphone volume too much does allow for music to be heard more easily, but, as Levine points out, it also heavily distorts subtle nuances in the mixing. Differentiation of the instruments, for example, is almost impossible. It’s “louder,” but also flatter.

Anyway, as I read this article and turned it over in my head, something else came to mind. I ride the subway and buses of New York City a lot. Lacking a car and working a little too far from home to just stroll or ride a bike, especially in an East Coast winter, I end up half-awake on subway most mornings and half-tired to death in the evenings, struggling to keep from just keeling over against the door or in my seat. But the subway with the skylines of New York rolling by does allow for an interesting testing ground for new records I get.

I don’t know why, but in my mind I can’t really latch onto music unless it sounds good while riding the subway. I judge almost everything against that standard, whether or not it fits not only within the parameters of lyrics, hooks, and vocals, but also as to whether or not it just “fits” while I’m riding along to my nine-to-five day gig. It’s hard to describe, but does it wake me up? Does it distract me from realizing that I’m about a metaphorical inch from snapping and killing everyone around me in the train car for being obnoxious mouthbreathers who smell of early morning cigarettes and shitty McDonald’s breakfast foods? Can it remind me that, maybe, something good can come out of the upcoming day or week, be it a decent show followed by a drink at the bar, or even just knowing that I can put the same record on as I leave the office later on that night for the cold and tiring walk home where more work, albeit freelance, tends to wait for me? I don’t really know for sure, but I do know that it helps make the trips a lot more tolerable.

I don’t have a record player, and I generally tend to be a bit of a dick to people when I end up dragged into the argument about vinyl versus CDs (which I generally try to avoid getting into whenever possible). And that’s because, mostly, I do find that the minute details of recorded music to be just that…minute. Sure, there are definitely differences when you say, compare Husker Du’s Candy Apple Gray versus Refused’s The Shape of Punk to Come. But, in general, I don’t always notice such differences between, say, modern records and think that that sort of thing isn’t necessarily a huge deciding quality to music. Not to say that I don’t notice overproduction. I do. I hear it all the time and it’s probably one of the biggest sins against music. Rather, it’s more an appreciation of different types of proper recording and production, which is a broad enough spectrum that I don’t find myself pigeonholed, and able to find that aesthetic comfort I seek for my private moments commuting with music.

I can find the same sort of satisfaction from listening to Paradise by Paint It Black (produced by J Robbins), as I do from listening to New Wave by Against Me! (produced by Butch Vig). Both of which, let me point out, are great albums from great bands that I love. And both are arguably very different production-wise, with J. Robbins coming from a very underground and “punk rock” background, as opposed to the more mainstream-oriented, but still talented, Butch Vig. Paradise is not too hi-fi, bass-heavy, and utterly crushing without sounding like it’s been Pro-Tooled to death. It’s one of the best hardcore punk albums to come out in the past ten years, to be honest. New Wave, on the other hand, is excellently balanced, preserving the lo-fi full-band sound that a punk band like Against Me! are known for, but still sounding good. Not too big, but definitely showing that the budget was well-spent in crafting a great album that isn’t impossible to reproduce live.

I love them both. I can listen to Dan Yemin scream his heart and throat out in the morning, helping juice me up to deal with ungrateful customers, lazy assistants, and paranoid bosses. Tom Gabel? The ride home with the streetlights and windows showing the late-night office inhabitants and after-hours cleaning crews I can observe from the train window officially have the best soundtrack ever.

It happens with other albums as well. I’m not being exclusive here. I guess my point here is that it’s possible for us as listeners to just get too caught up in the smallest and most insignificant details of music when, in the end, it’s the way it moves us in situations like this, like my mind-numbing commute, your drive to visit family two states over during the holidays even though you hate them, or his afternoon alone in his room trying to decide how to deal with a girlfriend breaking up with him. If it makes the hairs on your arms stand up, if it makes you remember that at the end of this disgusting work day there’s a game of Scrabble* with pizza and a bottle of wine waiting for you at your buddy’s apartment, then it’s doing its job.

And if they don’t? If an album doesn’t quite do that for me, turning a dreary march towards office death into a temporary escape into a world of stage dives, riffs, and high-fives, what happens then? Well, then someone gets a very special trip to the record store to be sold for five bucks, donated to the library, or perhaps a fate even worse than that: turned into a coaster for bowls of salsa and bottles of Sam Adams for movie nights.

*) Replace Scrabble with bowling, Ninja Solitaire (a game of my own invention), Ghetto-Opoly, or any other similar substitute if you want

Solicitations of marriage can be forwarded to costakout (at) gmail (dot) com.