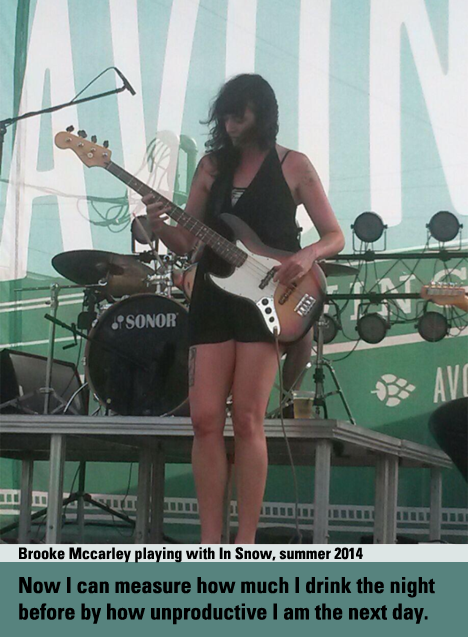 Trials and Tribulations of a Misguided Adult: Retiring the Wild Nights, by Brooke Mccarley

Last Saturday morning, I ran my longest run to date while blasting either Goat or Unwound in my earbuds. After three or four miles, I stopped the music and got lost, both in the silence and by my feet slowly hitting the pavement. Some moments were uphill struggles, but there were a few moments I felt content running early in the morning. There was even a moment when that silence faded into some type of runner’s high and I jogged in a state of bliss. It lasted until I was interrupted by a well-groomed, athletic couple. They jogged towards me and greeted me with smiles and an enthusiastic hello. They could have been models for a magazine catered to conservative Christians and health freaks, which led me to think they’ve probably been enjoying their Saturdays like this for a long time.

Even though I’ve been running for years, this was one of the first times I’ve made an appearance on the sidewalks early Saturday morning. Saturday mornings were reserved for sleeping in, fighting a headache, and eating the greasiest food to satisfy a hangover. If I was on the sidewalks this early, then I was probably walking to wherever I left my car the night before or trying to find the blackest coffee available.

I waved a hello back to the pristine couple, and I could hear all the different versions of my former self laughing. Some were holding PBR’s, Thunderbird, or Evan Williams, while other versions were smoking Parliaments or Camels. There were a few past versions standing on my old porch surrounded by hundreds of empty beer cans while a touring band slept in the living room. Not one of them was jogging, sober, and waving at even more sober people. Who have I become to spend a Friday night at home so I can run ten miles the next day surrounded by joggers with bright smiles and athletic attire that cost more than most of the clothes in my closet?

I turned my music back on so I didn’t feel like I sold my soul. I know those younger versions of me were looking down in disgust as I ran. The night before, I felt them tempting me into a predictable night of drinking while I was at a bonfire at my bandmate’s house. The decision was there to make and it stared at me assuming the answer. I could go home early or I could keep drinking and meet up with others at a bar. However, if I did let my old habits win and go out and meet up with friends then I wouldn’t have been able dedicate my entire day to running and then research and writing. I went home early, and the next day was the best my body had felt in years on a Saturday.

In my early twenties, every night was about going to shows, playing music, or living in a decrepit house where touring bands could play. I was young and everyone around me was just as young. We were all servers at mediocre restaurants, pizza delivery drivers, or something similar that required minimum responsibility. We all played music or made art, and we all drank almost every night. During that time, I would drink and write without thinking how they were connected. Writing was part of me just as music and drinking.

A few years past and predictable as it may be, all the punk bands I once was in became defunct. We got older. We got kicked off our parent’s insurance. We had to get somewhat real jobs. Somewhere during those years of finding gainful employment and collecting a closet full of business-casual outfits, I started going through the motions of the person I used to be. I wasn’t playing in bands anymore. At the same time, I would go to shows, but it wasn’t about supporting bands—it was about drinking. Some nights I would skip the show and just go straight to the windowless basement bar where everyone would meet afterwards, like it was some watering hole for drunks.

I watched the younger crowd fall into the dive bar after shows like clockwork, and I played another game of foosball for shots with friends who were either too broke, too cool, or too uncomfortable to go to shows anymore. Playing foosball saved me from sitting at the same barstool for hours, sharing gossip or snarky comments about other people I know in the city. Even though this was the bar that all the people I know would end up for the night, I always felt my energy seeping out rather than being energized to see my friends. I always wondered what I was expecting to gain by being at the windowless bar so many nights, other than becoming a badass foosball player.

I believed that the hangover sparked my creativity, so I felt like I was having the best of both worlds—downing beers and whiskey shots all night then spending the next day writing poetry or non-fiction. Yet those poems and essays never moved passed being something more than words in a journal. I’m not sure when I developed the theory that I wrote better with a hangover, but it was probably due to a residual buzz I had the day after a long night of drinking. I was probably walking to get coffee.

After an eight-year hiatus, I became a musician again, playing DIY venues while trying to plan out-of-town shows around my work schedule. During that hiatus, I battled with the idea of being too old to play music. Now at thirty-six I play in the band In Snow with three guys who are almost ten years younger than me. We are heavier and more technical than my older bands, and it’s the most successful band that I’ve been in. I never understood how empty I felt when I wasn’t involved in music until I was playing again. I felt I had control of my happiness by balancing work with playing music. However, I was still trying to write on the weekends while living up to the notion of a weekend warrior. 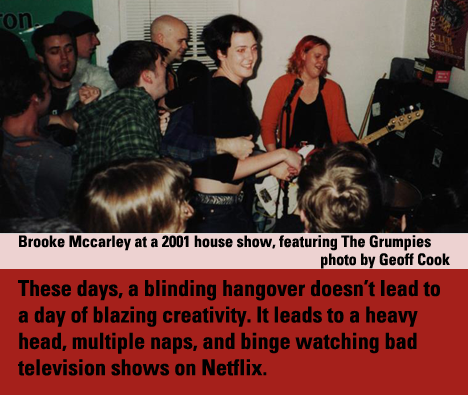 Ten years ago I could swing drinking until the sun came up, but now I can measure how much I drink the night before by how unproductive I am the next day. I wasn’t writing the story about being mugged on my way to play in a Murder City Devils cover band for Halloween. I wasn’t finishing the story about killing my animal spirit and whatever that means. I didn’t start the application for graduate school. These days, a blinding hangover doesn’t lead to a day of blazing creativity. It leads to a heavy head, multiple naps, and binge watching bad television shows on Netflix. Even if I pushed myself to the computer to write, my thoughts were so stale that I all I  produced was a zombie stare into the screen. My mind and my body revolted against my excessive drinking.

The thing about being in your late thirties is that all those young friends you used to drink with every night are now also in their thirties and some of them are even health-conscious, responsible adults. As long as I’ve been running, I could never pass the seven-mile mark. I smugly watched  a friend post a celebratory status after running three miles for the first time. Then I was perplexed when in no time they were surpassing me by running twelve, fourteen, or twenty miles.

All of my friends shared similar and unfortunate advice: save your big run for Saturdays and don’t spend Friday drinking all night. This alone was not enough to keep a wild-child-reaching-midlife down on a Friday night. The real sobering truth was that drinking like a twenty-three-year-old version of myself was not helping me creatively. It was beyond hindering me. It was suffocating me.

I want more from life than to settle for a mundane job that defines who I am. One time, I wanted to be a successful athlete, and I even rode that dream all the way through college. Even today, I don’t feel childish to want more than to be known as a female who spends forty hours a week working at a library.

I want to be a musician.
I am.

The one thing that connects all my past versions of me is the need to create and strive towards my goals. All of those versions have been held back and put off by the goal to go to the party. Being creative was an empty gesture because of the need to go out and see what fun I was missing. It’s time to retire that empty gesture.

Brooke D Mccarley is a writer and musician while working at a public library in Birmingham, Al. You can find more of her writing here. Find info on her band In Snow here.