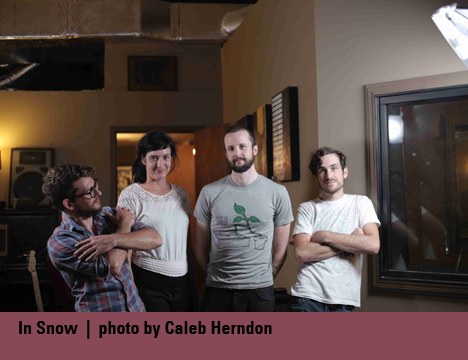 For me, the ability to sacrifice time and to feel rejection, grief, and annoyances while willing to communicate openly for the sake of a song or a show all play out similar to being in a relationship with a significant other. You have to have the ability to be as real as possible with someone else and not be afraid of looking like an ass in the process. I feel that realness is reserved for boyfriends, family, maybe the best of friends on the worst of days, and definitely band members.

All of these dynamics played out to their fullest in a band I was in years ago called Auburn Bikini.Like most bands that I’ve played in, we started as friends who spent nights shooting the shit and talking about playing music together. We discussed influences enthusiastically without any regard to the potential annoyances, gossip, and arguments that would arise in the future.

Auburn Bikini’s lyrics were dedicated to football. We had a tambourine player who made grand entrances by pulling his muscle car to the front of the stage. Even if those elements shouldn’t work for a punk band, people still dug us.

We had high energy that translated well to a crowd. There wasn’t a lot of standing around and heads nodding to the beat. Beers were thrown. Bodies sashayed. Feet and legs jittered in all corners of the room. This led to our first and only CD that was released on Arkam Records and even prompted a sour review in this publication in which we were described as “stoner frat guys.”

The drummer, the singer, and I started the band, and we asked our first guitar player to join us because, well, we thought it would be cool to have another girl in the project. Plus, I assumed she was a punk virtuoso since she said she had been taking guitar lessons for more than seven years.

We quickly saw the first signs that there was more to being in the band than friends taking the party to the practice place and writing songs together. Our guitar player was easily frustrated and short-tempered when she tried to learn songs. One day she broke down and spat out the words, “I don’t know power chords.” She spoke those words as if she was disgusted that we even implied that she did know how to play G or C. Unfortunately, her lack of basic rhythm did not compensate for her lack of chord knowledge. But we said, “Screw it. She’s in the band.” She played her one-string notes that spiraled away from the drummer and me, the bass player. We chalked it up to dissonance and marched forward as a band.

Surprisingly, the march was fairly successful even when one member lacked all basic knowledge and essence of a guitar except for the act of holding it. It lasted until the drummer in the band started dating a girl our guitar player disliked.. Our guitarist shared her disdain for the drummer’s girlfriend, subtly at first; eye rolls while complaining to our singer and me. It soon escalated to hatred for our drummer: threats, walking out of band practices, and yelling at him or yelling at me about him. Friends were confused, and I was often met with the following questions.

“Wait, I thought he was your ex-boyfriend. Did they date? Oh. No? Then why is she so upset?”

I could only speculate that she was upset because the new girlfriend was slightly annoying. However, the girlfriend was turning out to be less annoying than our guitarist. After incessant threats and nasty looks, our guitar player gave us one last ultimatum.

She asked to meet the band without the drummer in the front yard where we practiced. She wanted to talk. She had been crying and her face was red due to the screams that I listened to on the phone minutes before our standoff in the yard. We told her we chose our drummer over her. Her eyes filled with rage. They focused on us. We had betrayed her. I hadn’t dealt with many confrontations or conflicts in my life other than with my brother. There was a rush of blood to my head and my nerves forced my heart to beat fast. I was shaking with the surreal-ness of the situation. The only thing that came close to this feeling is ending a relationship that was already dead, and I was the first to realize it. It was the first time I kicked anyone out of a band, and it opened up a dark side to playing music. There was more to playing music than getting together and having a party in a practice place. There were fights. There were lost friendships.

Our second guitar player lost interest when his feelings of friendship turned romantic towards me. He confessed his feelings twice. The first time he drunkenly confessed, resulting in a night that ended in rejection and a friendship that turned awkward.

I knew I had to go to practice the next day so I treated the raw nerves of our intimate encounter like the mature adult that I was, with partial amnesia and by pretending nothing happened. I was relieved when I thought he was pretending that nothing happen as well. Let’s put makeup over the blemish and carry on. These raw nerves will heal over time, right? However, after everyone left band practice, he confessed again and more soberly. I responded, “We talked about this last night.”

He nodded his head while frowning, “I was afraid that we had.”

His interest in the band diminished along with our friendship.

The band tried one more time with our third guitar player who was sent to us from the heavens above, or so it seemed. For a time he was our golden boy, our MVP of rock’n’roll, and hopefully our saving grace. However, we were damaged from our lost friendships, and we were tired of dealing with this dead-end relationship that met once a week to write songs. We all decided to quit after our singer forced the band to cancel a weekend tour that the rest of the band was eager to play. At least this time it wasn’t the guitarist’s fault.

The only thing he did was crush any hope for a reunion when the guitarist tried to break a beer bottle over our singer’s head a few nights later. That night he ran through the crowd, like a train gaining momentum, towards our singer while screaming obscenities. In hindsight, he probably should have been less theatrical in his approach. Our singer blocked the beer bottle by putting his arm up thus causing some fumbling of arms and an anti-climactic impact on the singer’s elbow.

I didn’t play in bands for years after Auburn Bikini broke up. I had moved to new city, Birmingham, and I didn’t know many people. Also, I was nervous and intimidated by the talented musicians in Birmingham. However, one important reason that I didn’t jump into a band was that I learned that being in a band wasn’t just about the music. It was about the friendships, and the potential to damage them. Now, Birmingham isn’t new and I play music with friends. My current project, In Snow, doesn’t write about Auburn football, but I think we have potential to make music for a long time. We also have the potential to end it due to not communicating, resentment, and other annoyances.

I think about this potential to damage the band when I found myself in the corner of one of our favorite hangouts with two bandmates. We were in a heated conversation. Friends kept approaching, wanting to talk, naive to the heat stewing in the air around us. Those friends felt the heat of our words, grimaced, and then awkwardly backed away. We couldn’t find the pivotal point to dampen our frustrations, for others to join us in the normal act of socializing. We needed security guards around us saying, “Don’t come any closer. You’ll see these three acting foolish while ignoring.”

Basically, someone in the band wasn’t happy. To be honest, he had not been happy since we played a show a few months before. He hadn’t bounced back from that night, and now—after some time of holding in all his anger and frustration—he was heatedly discussing his frustrations with us.

He was yelling at us.

The other bandmate and I tried to reason with him by asking what we, as a band, could do to get through this lull that we had all had been feeling. We demanded that he tell us what pissed him off in reference to the two of us.

He directed his attention to the other bandmate.

“You! You need to turn down when we are trying to talk!”

Then he turned towards me and declared, “And you! You need to make more of an effort!”

His words meant that I’ve had it wrong, and that realization was funny to me. I had been backing off creatively as I thought I was too aggressive in decisions when it came to every aspect about the band, from writing songs to booking shows. I didn’t want to step over any sensitive egos so I thought I would be less vocal and only add opinions to someone else’s suggestions. You know, be the shadowy bass player in the background. Yet that was the only humorous aspect in any of this. I was annoyed that we had come to this night of drama in our band’s dark and moody timeline. Since we were all good friends, I thought we could overstep that one shady, shitty aspect of being in a band.

We seem to be a shade paler than we were a year ago when we were enthusiastic to go to band practice because it was the same as hanging out with best friends. If this was a relationship then the honeymoon phase was over. And that can be frustrating. I feel that my bandmate’s frustration was exaggerated but genuine. I also feel with my age, and previous experience, I can see this lull as just a snag in our timeline. The lull in our practices and shows is not the problem, but what we do next to move past the lull will be the true problem or the solution. Will we have more blocked communication and undealt-with emotions until we call it quits? Will we get over the hang-ups and find our spark again?

Brooke D Mccarley is a writer and musician while working at a public library in Birmingham, AL. Find info on her band In Snow here.