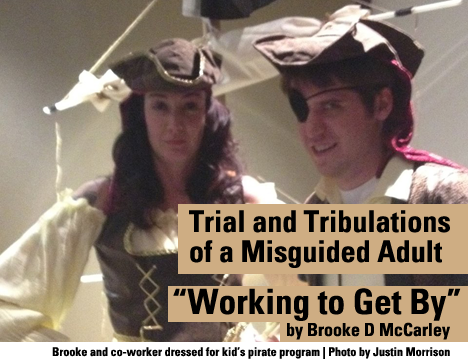 Trial and Tribulations of a Misguided Adult: Working to Get By Brooke McCarley

My path to library employment was slow, yet blurred. I covered high school football for a poor-man’s weekly located on the outskirts of Birmingham. A few years later I was working at the library. I grew up in a rural area where daily trips to the public library for reading programs were unheard of. The best we had was a book mobile that made monthly stops in our community.

My flawed vision of a library, unfortunately, stemmed from the movie Party Girl, which starred Parker Posey as a librarian in New York City. The public library in Party Girl had few patrons that I can remember. They occasionally made an appearance and gave the illusion that the library was a quiet place without foot traffic. Mostly, it was Parker Posey shelving books and talking about books to her eccentric and nerdy co-workers. The she had all the energy to host parties in her New York City loft. There were no long lines of patrons, checking out one mother after another like at a Supercenter Wal-Mart.

I quickly realized that working in circulation at a public library is not so much about being surrounded by books or partying with Parker Posey; it is about the public. After a few years I watched my fantasy of working in a quiet library dissolve. There was no downtime to read or write like I envisioned after seeing that movie or the two times I actually visited the campus library where I attended college.

To be honest, my dream job was a job that kept my parents from nagging me, and it had to be easy enough that allowed me to have creative time for music and writing. I thought working at a library was a job that I didn’t have to “take home” with me after hours.

The truth is that I was taking home the emotional baggage. I was unaware of the concept called “summer reading programs” when I started, and I happened to start right at the beginning of summer. I knew what busy meant in a retail setting. I’ve been a server in busy restaurants, and I have worked many black Fridays in music stores and bookstores. I didn’t know that a library would be as busy as retail holidays every day in the summer.

The job turned into long lines of mothers checking out twenty, forty, or fifty or more children’s books for their kids. Weekly. I watched a man scream at my co-worker because we couldn’t find Nancy Drew books he requested. My co-worker was a sixty year old grandmother. Another time, I told a man he owed twenty-three dollars in fines. He responded with, “Oh shit! Oh shit! I shat myself!” He wasn’t lying.

I also realized that the majority of people didn’t respond well to the word “no,” and they refused to take it as a final answer. People would lie about fines they accumulated instead of pay them, based on principal.

“I know I turned that book in the day it was due. I remember putting it in the book drop.”

“Ma’am, the fine is three years old. Are you sure you remember that day specifically?”

“This is terrible! I have never turned in a book late in my life!”

Another time a patron could not renew a book while he was on vacation so it was going to be a day late. He was upset about the twenty-five cents he was accruing so he called for help. I couldn’t help him as I can’t override a renewal block when other people are waiting to read the same book. He was appalled, and he berated me about the fine.

“So I’m out of town on vacation and you’re telling me you can’t do anything about it! It’s going to be late!”

After three years at the busiest public library in the south, I moved to another branch, which promised shorter lines, less patrons, and more downtime. I was trying to escape the long lines of stubborn patrons and white noise that filled my head after long hours of customer service every day. Yet it seemed that when I escaped the busy library, I realized the white noise had covered up the fact that I was losing the part of me where I kept my happiness and compassion. I was too busy with superficial customer service to think. I finally felt the bitterness grow once I had more time to think again. Some days, that bitterness triggered me to be so full of disdain that my customer service eroded and was replaced by coarse responses. A few times I apologized after I spat out words with thorns in my voice instead of the fake and cheerful response they wanted.

“No. You can’t just take library books without any I.D.”

“What does it matter how tall I am?”

As soon as I muttered these words, I was filled with guilt for feeling these sharp emotions that I’ve never felt before. I then apologized while wondering what was wrong with me to act out.

I listened to myself apologize in disbelief. How had I gotten so burnt out that I turned into a disgruntled public service worker?

The problem is that the job was mind-numbingly easy and the community was mind-numbingly pleasant on the surface. Since the library was less busy, I did have more downtime between patrons. Sometimes I would write, but it was neither healthy nor conducive as I was interrupted every five minutes to help a patron. At first, I thought that was better than the constant lines at the busier library. However, I realized that I was never in the moment—be it helping someone or writing. Both practices interrupted each other, which was jarring.

However, the fact that it was jarring was just a lesson that I needed to learn. My aspirations to work in a library because it was a dull place where I could make money and do my other hobbies was a naïve and juvenile way to approach work. Yet many times as I worked at libraries, patrons would suggest the same naïve comment in hopes of employment.

“I wish I could work here so I could just read books all day.”

The library that was less busy was located in Mountain Brook, which is home to one of the wealthiest and most conservative demographics in Alabama. It is a community whose average house sales for more than $500,000, which is a huge chunk of change for Alabama. A few miles down the road, you can find the DIY venues and my favorite hangouts, but once you get to Mountain Brook you are surrounded by a traditional southern public that likes to be catered to. For me, one of the main traits to work at this library was to tolerate a public that fit the library into their daily routine; after the gym and before their weekly manicure. There were many times I watched a woman open her purse and fumble around inside as if she just had hands surgically attached to her arms and was learning to use them.

“Can you be a doll and just, just find my library card? I don’t want to scratch my new nails.” I complied but not until I shot a glance over at my co-worker who was quietly laughing at the delicate woman. Once the patron was gone, we shook our heads in quiet agitation.

A few times a patron blamed “the help” for losing a book.

I watched women visit the library every day with their children. Their husbands were working as the women proceeded through their daily routines around the community as trophy wives. Story time was about the story and the kids, but it was almost a social affair for the mothers who showed up in their oversized SUVs which clogged the parking lot.

I listened to their causal conversations, and I started to feel beat down. On more sentimental days, I felt that as my life didn’t compare to theirs. Their ability to effectively carry out a traditional lifestyle seemed like a fairytale compared to my life. I didn’t want their life. What would I do after I made dinner for my family and tucked them in for the night? My reckless twenties are just a faint memory and my forties are knocking on my door. As I get older, I feel a doubt that seeps in and asks questions in a critical voice. The critical voice was inherited from my parent’s traditional ways and acting normal. Am I getting to old to be living in my apartment with my boyfriend? Am I too old to be playing shows for forty dollars on a school night? The critical voice made me wonder about my imaginary three kids, my tiny mansion, and my weekly manicure.

Those critical days were far and few in between, and I usually laughed at myself after I felt a longing to be among the traditional and boring. Usually, I felt like I fell into a vortex as I tried to shake off the show from the night before. They lived in a bubble and I was far removed outside the bubble as I checked out their books, smiled at their gestures, and forced a hollow laugh at their dumbass jokes.

I know that even if I did have three children I wouldn’t understand their life. These were the girls who sat together in college, wore their sorority shirts to class, and talked feverishly about formals and social gatherings. I was on the other side of the room wearing black band shirts and converses. There was no sorority house close to where I live, just a dirty house where I hosted bands from around the country and allowed friends to gather and have fun. Fifteen years later and there is still a thick line of separation. Now it is more layered than music, Greek life, and extracurricular activities. It’s not about Converse shoes and black shirts. It’s my way of life, and it’s not by accident. It evolved with every action and choice I’ve made. It evolved by following a path of what I wanted. I wanted the late night, the bands, and the free time to enjoy my hobbies. I don’t want the family life, the daily children’s program, and chatting it up with other mothers at tee ball games.

I worked circulation for seven years between these two different libraries. I was never content at either place, but I stayed because the job provided financial and predictable stability. I was off most nights and weekends, and my supervisors were lenient about taking vacation time for more out of town shows. It appeased my parents because it had state retirement, which is something I never thought about, yet they chirp those words repeatedly when I discussed leaving the library.

During those seven years I watched my usually cheerful disposition crumble underneath fake customer service at the checkout desk.For the last two years, I came to realize that I shouldn’t work just to have a job that paid my bills and allowed enough free time to enjoy my hobbies. No matter how much free time my job allowed, I have to work more than play music on a daily, weekly, and monthly basis. I recently started working at the local humane society and I  hope that I found a job that fulfills me, and I will fit my music, writing, and other hobbies around it. Forty hours is too much time per week to spend doing something only for the act of getting by.

Brooke McCarley is an ex-librarian and musician living in Birmingham, Al. Now she spends her days crawling under barns to rescue puppies and receiving concerning calls about horses, dog and crazy cats. Find more of her writings and about her band here: http://www.southernandsidetracked.com/