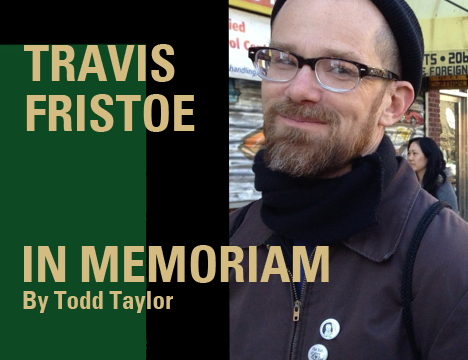 On Friday, Aug. 7, 2015 Travis Fristoe took his life. Travis was a fellow traveler, on a path with few footsteps. He was a zinester and writer of the highest caliber (check out America?and the book Radon), a longtime volunteer at the Civic Media Center in Gainesville responsible for helping shape its zine collection, a librarian, and a musician (Moonraker, Reactionary 3, die Hoffnung, True Feedback). To me, Travis’s greatest accomplishment was that he was Travis—a rad, thoughtful person engaged in his communities. He put his time in, not for recognition, but because he gave a shit.

I always enjoyed catching up with Travis, in person and online. (One of my favorite memories is talking to him about books and how I thought the punch line to Infinite Jest was on the last page because if you made it that far, the joke’s on you. Fuck twelve-hundred page books about tennis. He vehemently disagreed. It was funny.) But I always respected Travis. He was a busy guy who I gave an open invitation to write for Razorcake. (In 2013, he interviewed The Careeners. Here’s a PDF of that interview.) A month before he committed suicide, we went over several revisions on his memorial to Lance Hahn, a bittersweet paean that takes meaningful time with J. Church’s last record The Horror of Life. Travis was a compassionate craftsman. A record helped guide him through the life transition and heavy emotional weight of becoming a responsible father and grandson. Not only did Travis put words together artfully, he did it with heart. With light. With hope. With kindness. And those things make Travis’s passing hurt even more. He was one of the few holding a torch against often almost unbearable darkness.

Travis suffered from severe alcoholism, a terrible disease that ramped up quickly and consumed him. He did a good job of hiding it from a lot of people who didn’t see him that often.

When I first heard the news that he killed himself, I was angry with him. Angry that he left behind his daughter Astrid—born in February—and his stepdaughter Suki. Angry that he left behind Avery, his lifelong soulmate and new wife. Angry that he had to know his body would be found by someone whom he loved and loved him. What a terrible last act. My anger was based in fear. My anger was partially based on the fact that Travis was the second friend in almost as many months to take his life. He joins Chris Pepus.

I did not know the depth of either’s pain and suffering.

I regarded the two fresh graves in my heart and the dark hand I’ve been dealt this year beyond these deaths. I am severely rattled. Many people checked in on me, to see if I was okay. I accepted my family and friends’ kindness and support. It’s humbling. It doesn’t come easily for me. They made me know I was loved. They provided light and ballast, showed that I was far from being alone. My anger at the dead dissolved into compassion for the living, to all who love Travis and miss him with a deep ache.