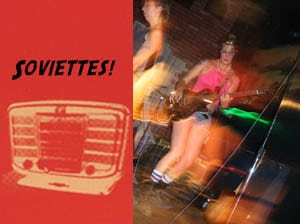 Toys That Kill, Fleshies, the Marked Men, and the Soviettes: Live at the Doll Hut in Anaheim, 7/13/04 By Josh

All pictures by Todd Taylor
Picture of the Soviettes taken the night after, at the Smell

It was a show that pretty much everyone I knew had been looking forward to for months. I mean, who the hell wouldn't look forward to seeing four of the best bands in existence? Minor hurdles, like driving all the way to Anaheim and not being old enough to get into the venue, were quickly disposed of and we were in. High fives were exchanged.

The first band to play was the Soviettes from Minneapolis. They were energetic, tight, and they all looked like they were having fun, which is something that not a whole lot of bands can pull off. Live, they were less poppy than on record, and that's not a slight in the least, but I must say that the funniest part of their set was them talking to each other in their Fargo accents (although I think a couple of them are actually from Fargo, North Dakota). 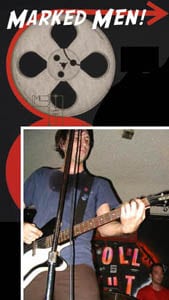 The stage was set for the Marked Men, who I had been waiting to see for what seemed like ages and ages. I had heard that they would be doing a second tour of Europe just before one of the guitarists went to Japan for a year, but plans change and that European tour became, thank goodness, a tour where I would get to see them. To say that they lived up to the expectations that I had set for them would be the understatement of the year. They slashed through a set of their buzzsaw power pop songs, drawing equally from both of their albums (which are phenomenal). No wasted motion, not a single wanking note, just a flawless, vacuum-sealed cross between the Dickies and Teengenerate.

If you've never heard Fleshies (like their song says: no "The," just "Fleshies"), it's kind of like an exotic hooker. You're not really sure what they're doing, all you know is that, for some reason, you like it. Your ears kind of prick up a bit. You spend a good amount of time trying to figure out just who they sound like (older Turbonegro stuff meets the Cows meets Blatz?), and then you realize that they rock so fucking hard that it doesn't matter who they sound like. I had never seen them before, but I had heard the stories of microphone lariats knocking off people's glasses, white underwear becoming gray from rolling around on dirty floors, audiences left dumbfounded. 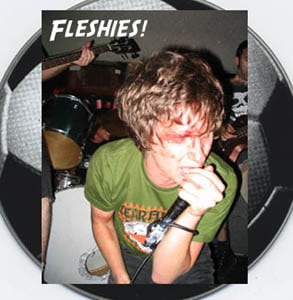 Seeing them onstage brought back the confusion from when I first heard them. In an era where many bands try so hard to dress the part of whatever band they're in, how did these five guys decide to start a band together? A hesher playing drums, a dirty punker making weird faces while playing guitar, the other guitar player doing perfect Angus Young dance moves, a singer that you probably wouldn't look at twice if you saw him at a grocery store... it just didn't make any sense. But then the music started and what they looked like didn't matter. Musically, they just ruled. It was loud and intentionally ugly, and yet catchy at the same time, like their records but turned up real loud. The singer, John Geek or Johnny Snorkel Faggot or whatever he calls himself these days, was a human tornado. He took his extra long microphone cord and went outside to sing for a while, he sat down in a corner at the back of the club, he stood on top of the bar with his head scraping the ceiling, and he probably delivered a baby when nobody was looking. At some point, he cut open his eyebrow, and he kept touching the wound, as if he wasn't sure that it was actually his own blood. 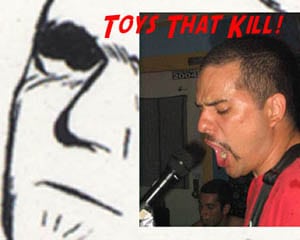 Closing out the night was Toys That Kill, and the thing that amazes me about them is how they're not really flashy or "dude, you just gotta hear 'em," but even though I've seen them at least twenty times, I always walk away impressed. They played one of the best sets I've ever seen them play and they definitely weren't blown off the stage by any of the other bands.

Pound for pound, it was one of the best shows I've ever been to. All four bands were amazing, nobody got mangled while trying to dance, and Rawl from Killer Dreamer was the only person that I saw puking in the parking lot. The only thing that got me scratching my head was, "Why are there only forty people here?" Oh well. Let the underground stay underground. That's how we like it.