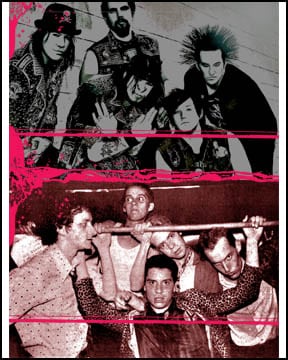 Total Chaos and The Consumers : Recent Record Review from Issue #67

Reviewing records is tricky business. By its nature, it’s subjective.

As an editor of Razorcake, I make these considerations:
1.) Razorcake is reviewing records not for the sole purpose to sell records. (There is no direct correlation between advertising and a good review, between a band being on the cover and there being any advertisement of said band in our pages. (Check out AP, Punknews, and any major music magazine if that’s what you’re into—publicists and larger labels running a taste machine next to car company ads.) Sure, we have biases. We’re not robots. We’re not company people. There are individual reviewer biases—not a Razorcake-enforced policy bias. I wouldn’t have it any other way.
2.) There are three camps that will likely complain about a negative review very quickly: the label, the band, the band’s fans. There are large camps that’ll read a review, file it away, remember the review, and eventually go check out a band, to see if it matches their liking. It’s a much more cumulative, long-term reaction. Razorcake’s based on the long view of music, music we’ll be listening to in ten, twenty, thirty years.
3.) We are a DIY punk zine whose focus is DIY punk. We’re not cops. We’re not music Stalinists. We’re also not the place you come to for knowledgeable discourse on free jazz, show tunes, adult contemporary, new country, or major label anything.
4.) We “frontload” our reviewers, meaning that they’ve been vetted of this simple fact: I may disagree with them but they know what the fuck they’re talking about.
5.) All of our reviewers are volunteers. They’re music junkies. They can’t help it. They get paid by the records they review.
6.) The people who “know” the most about record reviews are those who haven’t written more than a hundred in their lives. Believe me, the first two or three thousand are easy. They write themselves. Then it becomes harder and harder…

With that in mind, may I introduce two very different reviews from Razorcake #67’s review cycle.

TOTAL CHAOS: Battered and Smashed: LP
How’s this for a Fantastic Amazing Trivia Fact: Before this, i’d never heard a Total Chaos record before. I guess they just never really seemed like something i’d be into, plus i was always sort of offended by their name. I mean, isn’t there sort of an unwritten rule of punk band names that, if you use an element of a pre-existing band name, you hafta put your own creative twist on it? Like, i was in a band in the early ‘80s called “Suburban Mutilation,” which isn’t a particularly great name, granted—but still, there were the Suburban Lawns, and a few other Suburban-this’s-and-thats, so “Suburban” was kind of taken as a band name root word—but no one ever used the word “Mutilation” in a band name before, so we put that together with the “Suburban” part and it was kind of acceptable that way. Now, if you take “Chaos” as that same kind of a band name root word that “Suburban” was, there’s been Intensified Chaos, and KAOS, and Kaaos, and Kaos 64, and Chaos U.K. and Chaotic Dischord and who-knows-what-all-else kinds of Chaos in band names, so, to me, “Total Chaos” just doesn’t cut it as far as putting enough of a unique twist on the whole “Chaos” root word to make it an acceptably different variant per our unwritten codes of punk rock handed down through the generations. Quite frankly, “Total Chaos” looks like something that a BBC television producer would tell Vyvyan of the Young Ones to write on the back of his vest, whether he wanted to or not. I’m not sure what that has to do with the record. Anyway, I found the album, on the whole, to be halfway decent. With the exception of a too-slick kick drum sound, i thought the playing and production seemed pretty crisp, with those occasional little melodic street punk guitar noodlings up the neck to keep shit properly perky. I pretty much closed my tab and left the whole U.K. punk thing around 1983, as it seemed like album after album of endless regurgitations of the same thing ((wow, ten more albums that sound just like my Abrasive Wheels album, which already sounds like ten other albums i just got!)), with actual inspiration or innovation long departed for greener pastures; for better or for worse, that era seems to provide substantial inspiration here, with an occasional nod to Discharge-esque poli-minimalism ((“POLITICAL REPRESSION! POLICE STATE! BRUTALITY! POLITICAL REPRESSION! POLICE STATE! BRUTALITY!”)) thrown in for good measure. Lyrically, it’s mainly a guy who knows nothing about politics expressing his rather unoriginal views on politics, which is, to be fair, no great shame in the world of punk rock. I cannot say that this record has rightfully driven me down to the spike and paint store for spikes and paint, but i can say that it beat the spread. BEST SONG: “Delirium” BEST SONG TITLE: “Riot Heart” FANTASTIC AMAZING TRIVIA FACT: Album cover and innersleeve feature multiple photos of a punk getting his head kicked in by cops. I would have liked to have found out more about the specifics of this incident; perhaps on the next record there could be more time spent disseminating information like “why is the punk getting his head kicked in?” and less time spent thanking big-name bands and exotic foreign countries with whom they are intimate. –Rev. Nørb (Voltage, voltage-shop.com)

CONSUMERS, THE: All My Friends Are Dead: LP
Like Rocket From the Tombs, The Consumers didn’t last long. The band released no material in its roughly eighteen-month lifespan. And if it weren’t for All My Friends Are Dead, The Consumers likely would’ve been forgotten. The Consumers formed in Phoenix in 1977. The group’s lineup was built around David Wiley (vocals), Paul Cutler (lead guitar), Mikey Borens (bass), Greg Jones (rhythm guitar), and “Jim” played drums (the band had a revolving door of drummers). The band was volatile. Shows in Phoenix were halted abruptly or ended in scuffles (hard to imagine, but punk really pissed people off thirty years ago). In late 1977, The Consumers recorded an eight-track demo with Joey Dears, a high school pal of guitarist Paul Cutler. In early ‘78, The Consumers made the logical choice of relocating to Los Angeles where they shared bills at The Masque with X, The Alley Cats, and The Dils. By late 1978, they were done. In 1995 Larry Hardy, head honcho of In The Red Records, put outAll My Friends Are Dead—the eleven tracks The Consumers recorded with Joey Dears back in ‘77. (Hardy was a fan of 45 Grave and heard the tracks on a bootleg back in ‘81 while hanging out at Dinah Cancer’s house.) In 2001, the tracks were reissued on CD. With eBay prices hovering around the fifty dollar mark, Larry Hardy thankfully reissuedAll My Friends Are Deadagain on vinyl in 2012. As a historical footnote,All My Friends Are Deadwould’ve been an interesting release. What really gets me aboutAll My Friends Are Deadis the quality of the tracks. The songs are absolutely timeless—they could’ve been recorded in late ‘77 or yesterday. The Consumers were an incredible punk band that didn’t have to go through the birth pangs of punk rock; the group was erudite, could play, and was already aware of Henry Cow and Robert Wyatt—influences that’d take years for other groups to discover. The fidelity of the tracks is incredible (believe it or not, they were recorded on an eight-recorder in a demo studio).All My Friends Are Deadis distilled anger—capturing refined, edgy and intuitive rock’n’roll. There’s no way anyone else could’ve recorded something like this. (When 45 Grave tried to re-record these tracks later on theAutopsyLP, they were lacking.) It’s hard to believe that an eleven-track demo that lay dormant for eighteen years would turn out to be a lost gem. Thanks to In The Red, it’s available. After The Consumers, Paul Cutler would go on to form 45 Grave. He later joined the Dream Syndicate, replacing Karl Precoda. David Wiley formed Human Hands. Mikey Borens briefly played guitar for 45 Grave. Unfortunately, only Paul Cutler and Mikey Borens are alive today. –Ryan Leach (In The Red)