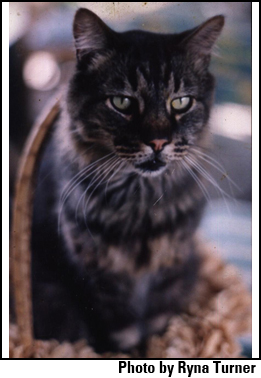 One of my best friends died in my arms on Tuesday, July 21st sometime around 12:30 AM. It was really rough. He died hard and fought hard with every fiber of his being to stay alive. He was seventeen years old. His name was Tom. He came to my bedroom door and tried to get me to help him but he was too weak to call out so he only softly bumped the door with his head. I thought it was the oscillating fan making the door move, so I ignored it. Then, I heard somebody repeatedly opening and closing the linen cabinet door that was right next to my bedroom. I thought it was my housemate Cathy, being indecisive, but it was Tom lying on the floor trying to make enough noise to get my attention. Tom then dragged himself up the stairs to get my mom to help him. I heard my mother’s voice from the kitchen. She was talking to someone and even though I could not hear the words, her voice was thick with concern and anxiety. I came out and asked what was wrong. “I think he’s dying.” said my mother as she cradled Tom in her arms.

It was obvious that he was dying. Tom had been sick for a long time, and the antibiotics no longer had any effect on his mysterious illness. His once-robust body was frail and thin. He was so weak that he wobbled from side to side when he was sitting still, and yet, I marveled at how he continued to hold his head high and enjoy the simplest things. He would savor a cool breeze, bask in the company of friends, and he never lost his robust appetite. I wondered if he had AIDS, but doctor said that test came back negative. Now he was dying. My mother held Tom to her breast, and his head rested on her shoulder. Death kept drawing him ever closer. Tom would struggle, strain, and gasp for air as he fought valiantly against the invisible force of inevitability. He reached out to me with both arms outstretched, eyes full of pleading fear as his mouth opened for a silent howl. I took him into my arms and I heard my own sorrowful moans escape as if they were coming from somewhere else. Tom buried his head into my chest as I pressed my forehead against his. He looked at me, he looked at my mom, Ryna—my fiancée, at Cathy, and then his head tipped backward, face toward the ceiling and his mouth opened for another silent scream as he continued to wrestle against death. “Let go man” I murmured through the sobs. Tom stiffened, he looked forward, and I watched his giant, yellow eyes dilate and turn gray. He was dead. My friend was dead. His body remained stiff and his eyes stayed wide open. I could not close them. Yes, Tom’s eyes were yellow…he was a cat.

Objectively, I know there are more important things going on in the world, and countless others are suffering through things much more excruciating, but on the personal, subjective level, this still hit me pretty hard. When a cat, dog, or some other cherished pet dies, it is not as big a blow as the loss of a person, but it still hurts because it is also a love-based, painful parting. It opens the heart and mind up to other, relative experiences and thoughts. Tom’s passing ripped open the thin skin I had grown over the memories about the death of both my paternal grandparents in 2008. This in turn made me think about all the friends and relatives I have lost over the years and it also made me reexamine my own mortality in conjunction with the impermanence of everything.

Some may accuse me of anthropomorphism, but I know the difference between that and genuine connection and realization. Anthropomorphism is projecting human-like qualities onto animals that are really not there. This is the reason there are so many animal-based stories in folklore and literature. We can see things in the animals that we see in ourselves whether it is genuine or imagined. We have all seen others do it and most of us are probably guilty of it to a certain extent. A friend of mine once told me about how her mother used to put the family dog in a high-chair and have a birthday party for it, complete with presents and a cake. That sort of thing is ridiculous. Usually, our projections are more subtle, like misreading an animal’s begging behavior as affection or simply thinking the animal is smiling when it is really bearing its teeth. Those monkeys are not smiling; they want to bite somebody. However, some pets exhibit behaviors that are clearly out of the ordinary and cannot be explained away so easily.

I am firmly convinced that like people, some animals have achieved a higher level of consciousness. They have transcended their ordinary mental and emotional limitations to a certain degree where they can connect at a deeper level. I have cats that are just cats. They sit in the yard all day, eating, crapping, and napping; they are just animals. Some dogs are just dogs and some horses are just horses. But every once in a while, a human and animal form a deeper bond where both become tuned into each other’s thoughts and feelings.

Anyone who has had a special pet knows exactly what I mean.

When my maternal grandmother died at home in June of 2000, Tom was the only other one there with me. He knew exactly what was happening. He sat across the room with his yellow eyes enormously wide and he let out a couple of incredibly loud, mournful howls, letting me know he understood. He came over to the deathbed and stood up with his two front paws leaning against the side of the bed and howled some more. As I knelt by the bed, holding my grandmother’s hand, telling her that I loved her, I watched her take her last breath and Tom ran out of the room. After that, Tom did not go outside for about a year, and he spent most of the days sitting in a corner, with his head down, forehead firmly pressed against the wall. Most animals do not mourn. Tom was one of the enlightened ones.

There are Four Noble Truths: 1: Dukkha (suffering); all living beings must suffer. 2. Samudaya (suffering is caused by attachment); our clinging leads to eventual pain. 3. Nirodha (end of suffering); there is a way to stop suffering. 4. Marga (the way to end suffering); The Eightfold Path, which is a prescription for enlightened living. I learned a long time ago that attachment to things, people and ideas cause pain when circumstances change and/or they are taken away. It’s the price of admission to the ride of life. I know also about the other three Noble Truths, but I choose to live an attached existence because I am still fond of sensual pleasures, emotional highs, loud music, skateboarding, and to many of the other pleasures of the world. The Eightfold Path works, but I am not yet able or willing to devote my life completely to it. In fact, I am firmly convinced that even the high and mighty monks and nuns are still attached to the world to a certain extent. I have seen it. They cope and remain stoic as best they can, and when nobody is around—when they think nobody is around--they quietly cry because they are still human.

Now, when I cry, I have a better understanding of what is happening, and it buffers the hurtful experience. When somebody I care for dies or is in the midst of suffering, I do not hold back my emotions, nor do I force them out. I let them flow naturally, let them run their course, and realize that it is because of the loving attachment that the tears flow. Tears of pain become tears of tribute. So, when I was out in the backyard at 1:00 AM, sadly digging the hole in the flower garden for Tom, I thought about how lucky I was to have such a cool friend and how lucky he was to have lived such a pampered, love-filled life. I thought about how some people do not get to live even seventeen years and how many have to die alone. I carefully placed his body into the grave, and began to pull the dirt into the hole. I inwardly smiled thorough the tears and snot because I realized I looked like a cat finishing up in a litter box. Mom brought me the cement block that was once part of the original Upland Pipeline Skatepark; something else that was important to me that is no longer here and placed it on top of the grave. We lit three candles, placed a few flowers and I marveled at how the orange flames from the candles made ever-shifting kaleidoscopic shapes in my tear-filled eyes. For a brief moment, I saw a vision of a tiger climbing a mountain. There he goes. Goodbye old friend.