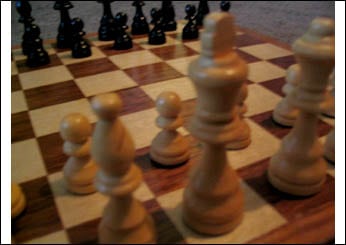 Through the Past Darkly with a Saucer Full of Secrets: By Generic

It was the first day of spring. There is a Latin expression that depicts the Sun's relationship to the Earth for just such occasions, but "the first day of spring" will do nicely here. The park was a bit more full than usual. There were the diehards, the old timers that came no matter the proximity of the Sun, the trendy speed players, the garden variety oddballs, and of course there was Brian Jones and Syd Barrett. The two had not missed a Thursday afternoon game in over thirty years. They were extreme creatures of habit that packed and planned for everything. For Syd, it was a buttered roll from the cart over by the Union Street Station, a thermos of coffee, and a chartreuse box of well-worn Civil War chess pieces. Brian carried his thermos of green tea and three packs of Juicy Fruit gum. Brian was an avid reader of the Village Voice, where Syd refused to read any printed material at all. In fact, their only common ground was the weekly chess game. Oddly enough, Brian and Syd would go unnoticed, despite the spectacle that they were. The two, independently, frequented Goodwills and thrift shops and developed a fashion sense somewhere between "court jester" and "bowery bum." This unlikely, bizarre-looking couple would meet weekly over a game of chess in New York's East Village and were allowed the generous gift of anonymity despite their aged and failing celebrity. Once settled in at "their" table, they would ritualistically place their belongings strategically about; never should the paper, thermos, nor chewing gum be out of reach.

The wind was blowing a bit; papers and plastic bags got caught up in random gusts of wind, dissipating onto the grass. Fat pigeons were making the best of discarded french fries and half-eaten doughnuts. Police sirens and car horns filled the otherwise silent park. The game started to get too serious for the guys at the next table, and a fight seemed more and more evident. Bystanders started gathering around, getting caught up in the heated match. Finally, it turned physical and the game ended as predicted. Brian and Syd were amused, and it is these amusements they looked forward to, more so than the game itself. The fact is they have never finished a game and rarely make any movement across the cement table with their tired Civil War chess men. The silliness of their intense dedication to the weekly game is only overshadowed by the fact that they hardly partake in the game. Still, all preparations are made; the chess men, Union and rebel alike, are never left behind, although for the most part they just sit there in formation, waiting for the next line of command. The chess match was a means to an end. It gave a reason for a weekly meet. Neither would admit to the fact that they enjoyed each other's friendship and company. Chess gave them the perpetual excuse.

Brian was smiling, and reached into this back pack and pulled out a copy of Out of Our Heads. "I swiped it from Bleeker Bob's," says Brian. "The bastard wanted sixty-five dollars for the bloody thing." Syd, who seemed quite pleased by this act of thievery, immediately responded by breaking the vinyl across the cement chess table and tossing the remains into the rubbish bin. Syd appreciates the reclaiming of one's property, but has never taken such a daring approach for justice. He opted for a bit of artistic vandalism. Armed with a fat black Sharpie, he would visit record shops and customize the covers of Pink Floyd records utilizing all the skills of Mrs. Crabtree's kindergarten class, much to the dismay of the shop owners. It was getting close to lunch, so a break was in order. A couple of knishes with mustard and Yoo-Hoo did the trick nicely; it was a glorious beginning of Spring. Feeling very satisfied, the two leaned back and smoked a joint, watching the world around them. Today they chose to keep the poison and bitterness off their tongue. Brian raised a flask containing Jack Daniel's that he kept in his vest pocket, very ceremoniously looked over at Syd and said, "To Mick." He took a long pull of his self-medicating elixir, swallowed, and passed it over to Syd. Syd, continuing in ceremony, raised the flask and added,"To Roger." In unison, the two chimed, "May they burn in hell." It was the first day of spring and what a glorious day it was.