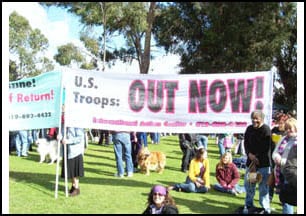 Three Years of War and Lies: A Column by Buttertooth

Since March 19th, 2003 our nation has been at war in Iraq. Every year on the anniversary of this date, or within a day or two of, demonstrations opposing the war have taken place all over the world. This year was no different, albeit, unnoticed by our current administration. In contrast, Bush maintained that the war will continue through 2008 in a speech given during the protest weekend.

San Diego held an Anti-War Rally in Balboa Park on Saturday March 18th. I arrived at the event shortly before 2:00 pm and took note of the crowd. There were all walks of life there: young children with their parents, elderly, and every color of humanity. People held signs showing their disdain for our government’s decision to occupy Iraq for yet another year. I estimated an attendance of around 400 while I was there, but figures I heard on the radio said the event topped 1,000 people.

The decision to continue this war isn’t a popular one. Polls vary, of course, but most linger around 60% of the U.S. population against staying in Iraq. The consequences have been devastating for their country as well as ours. Experts suggest that the end cost of the war, in money alone, will top 1 trillion dollars. To put this in perspective I found a brochure that calculated these figures for California’s taxpayers. In all, we, as a state will pay $40.6 billion for a largely unwanted war. With $40.6 billion roughly all these services could be provided to our state:

This information alone should have our government re-thinking their policies. But undeterred, they march on. The defense most commonly used to justify staying in Iraq has been that the “coalition,” read U.S. forces are providing Iraqi troops with training and preventing an all-out civil war. During the protest I listened to a speech from an Iraqi woman. She cried out for the U.S. to pull out of Iraq. She attested first hand of the atrocities being committed and the disdain most Iraqi civilians have for our occupation of their country. In her words, “Let Iraqi people make decisions concerning our country!!” Everyone applauded, but we can only detest what’s happening, as we are left defenseless to stop what seems to be a power mongering move of nation building for an oil-hungry empire.

The decision to go to war with Iraq was a sustained effort by the Bush administration. After 9/11, the administration attempted to establish ties between Al-Qaeda and Saddam Hussein. When none were found, they cited evidence found by Italian authorities that Hussein was attempting to acquire enrichments for uranium to build weapons of mass destruction. The document can be proven to be forged as easily as doing a google search. But our administration didn’t do any fact checks before the bombs fell over Baghdad once again. The images of Hussein’s statue being torn down and Iraqis cheering as this artifact fell have faded. Our media divulged this information as well as Bush’s speech aboard an aircraft carrier proclaiming, “Mission Accomplished!” well over a year ago. Since that time, U.S. casualties have risen sharply. As of March 18th of this year, 2,309 U.S. troops have died, as well as over 17,000 wounded. Of the troops that do make it home from war, over 25% have problems that require medical or mental health treatment. 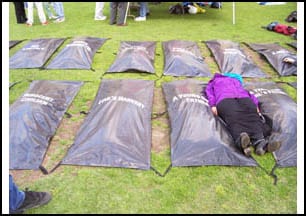 The cost in lives to the Iraqi people is staggering. Since the war began, estimates range from 30,000 innocent civilians to more than 100,000. Our President was quoted as saying, “30,000 more or less” as recently as January 2006. Not much for figures or the sanctity of life, which he speaks so much about in regards to abortion or other key Republican issues.

So has our nation been hijacked by corporate greed, blind patriotism, fraudulent elections, and an obsession with national security? Let’s hope not! As these are all identifying characteristics of a fascist state. Dr. Lawrence Britt has studied the regimes of Hitler (Germany), Mussolini (Italy), Franco (Spain), Suharto (Indonesia) and several Latin American regimes. He found 14 defining characteristics common to each. Our great nation seems to fit in to most of these terms. Here’s the list Dr. Britt compiled, you be the judge:

As you can see from this exhaustive list, many characteristics could fit our current administration. Of our annual congressional budget, 51% goes towards military spending. The combined budget for everything else, including education, social security, welfare, and all other public programs is 49%. Human rights violations are occurring daily during this war and violations of the Geneva Conventions have been seen in Abu Ghraib, the Black sites functioning outside the U.S. as interrogation facilities, and Guantanamo Bay in Cuba, where prisoners of war are held indefinitely without being charged.

As for fraudulent elections, Bush was elected in 2000 despite losing the popular vote, and again in 2004, even though there were rampant problems at polling stations in Ohio in predominantly democratic polling stations (http://www.blackboxvoting.org/ ).           Corporate power is absolutely supported by the Bush administration as EPA standards have been rolled back to protect corporate interests, global warming has been disregarded, and crony companies affiliated with the administration have been awarded contracts to “rebuild” Iraq and control the oil reserves of the country.            Corruption is no stranger to the Bush administration either. Tom Delay is currently on trial for illegal campaign financing charges, Jack Abramoff, a Republican lobbyist, just received five plus years for conspiracy and embezzlement charges, and Randy “Duke” Cunningham, the Republican Congressman in San Diego/North County just received eight plus years for his role in acquiring defense contracts for bribes of luxury items.

So what can we do as citizens to protect our country as well as respect other countries? There are many organizations involved in activism to protect civil liberties, stop the war, and attempt to hold the Bush administration accountable for its actions. One such organization is The World Can’t Wait. ( http://www.worldcantwait.org/ )

Their motto is: Drive out the Bush Regime! This organization wants to force the administration to step down and proclaims, “We, in our millions, must take responsibility to change the course of history.” Aside from their embittered struggle there are also literally hundreds of other organizations empowered and emboldened to take on the agenda set forth by those adhering to the right-wing ideologues. This list, albeit abridged, gives heed to the masses already taking action to preserve a democracy:

As a nation it seems time to take a long hard look at our policies abroad and our administration in power. It is no longer feasible for us to hide from the truth. The war in Iraq has been a tragedy from the start and it’s only getting worse. In a year where Exxon reports record profits while the U.S. middle class shrinks, finally, its sinking in. The world is being sold to the highest bidder and we must stop the killing AND the ideas propagated by an overzealous leader leaning on theology but committing acts of atrocity. Stand up for what you believe and scrutinize the information passed across the airwaves. If corporations have a vested interest in this war you better believe they will portray it as an attempt to establish a democracy in Iraq. (Even those supporting the President must have a hard time getting over his promises of 2000 to abstain from nation building and then reversing this decision for years of war instead.)

Politics aside, this planet and the people on it deserve better than this.