The aquarium of violence: The world is rarely black and white, and the power is in the subtlety. But not that night. It was exactly like seeing someone get half-nelsoned, nose-first onto the hood of a car and slide off of it due to it being wet from rain. Because that was just the start of what happened.

If someone’s not directly fucking with me, I go into Aquarium Mode. Aquarium Mode is this invisible glass container that bubbles around me and no matter what happens outside of that bubble, it doesn’t look quite real. I feel like I’m disconnected from it, like ten feet away, separated by clear concrete. Or it’s like watching TV that you get to walk around in. What I’m working up to is that the show was a bloodbath. I personally saw ten fights. None of the inter-personal fights had to do with the bands. Most every one started like this: “Hey, how you doin’? Having a nice time at this gathering?” A shrug. Perhaps a sip of drink. Then, fucking cracking skulls. People fleeing into traffic. And me standing there like a kid at Sea World watching the otters scratch their bellies; bemused and just soaking it all in.

The stage: The Fillmore. Here’s my thought process on that venue. Bill Graham Presents. Hippies. Fuckin’ don’t like hippies and people who harbor them. Suspicious.

The dynamic: I have to give total thanks to Lindsey Byrnes (marketing director for Thrasher) for not only getting me in, but massaging the security lady so I could enter with a camera with a removable lens even though there was no stipulation about cameras whatsoever. I have to admit that Lindsey tried her hardest to have the best Thrasher Awards Party ever. Tremendous forces were against her.

Goddammit #1: I had a VIP pass. Now, I’m not a bourgeois motherfucker. I’m down with the working man. I’m not saying that I’m a special dude; actually, I’m poor, poor VIP material. I was thinking to myself of two words that get downright wonderful when placed next to one another: “open bar.” No dice. A little buffet spread, which was nice. But no drink specials, just drink tickets that I remained blisfully unawares of. Phooey. It was 6:30. The show didn’t start ’til 9. I decided to drink in a more modest locale with my compatriots. No ins and outs. A short recap: No free booze. Hippie-founded place. Can’t leave. Cash situation precarious.

The salt in the bathing trunks of Thrasher’s success: The Fillmore doesn’t really seem equipped to handle punk rock worth a pickle. First off, by the second song of F-Minus’ set, beer had been spilled, dropped, and/or thrown onto the parquet floor, making it a very, very noggin-knocking slip’n’slide. Thusly, there was a 100 by 200 foot square of empty space in front of the stage, minus two rows where they had those handy, grippy mats that one stands on when doing industrial dish washing so one’s knees don’t get fucked up. It was at this 100 foot distance I wish someone would of handed the drummer of F-minus another drum piece that didn’t scare him. He seemed very intimidated by over half of his kit because no matter what the song, he kept hitting the same two drum heads at exactly the same speed.

Foreshadowing that things were going to be fucked: The lead singer of the Nerve Agents had a lab coat on and a Kevin Seconds bandana going on. He also had a knee brace. The band plays hardcore in a way that they do their best to have a lot of speed and weight and as little melody as possible. During the end of the Nerve Agents’ set, a band member urged the kids to rush the stage. And they did. And the bouncers really couldn’t stop them. Though they tried. They would have scratched their chins more if they weren’t trying to staunch their faces from bleeding so much. A mini-riot – by definition of being what they are – ensued. Things calmed down shortly afterwards. To get back at the Nerve Agents power play, their equipment was put outside in the rain. It felt like a little Charlie Brown-style cloud had been towed into the Fillmore. It was to never leave.

Arto Saari: He’s the guy that won the Thrasher Skater of the Year. He’s from Finland. He got an over-sized check. If it was one of those promotional sponges that get big in water, he could of used it like a life raft. He’s a much better skater than Gary Coleman from “Dif’rent Strokes.” Someone said he was the Baryshnikov of skating. That person got hit. A lot.

Imagine the sound of thousands of drinks being drunk very quickly and with not a lot of grace. 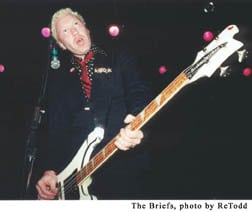 I don’t think the Briefs will ever be in porno: When the Briefs took the stage, these ladies in latex nurses uniforms chased them around. The Briefs weren’t being coy. They furtively ran way from the nurses. Except the drummer, but he had sticks. They wanted nothing to do with the breasty bobblers. I think the Briefs are a great band. They have a song about killing Bob Seger called “Silver Bullet” that’s a riot and they remind me about the best parts of new wave and bouncy, bouncy punk. Their LP, Hit After Hit, is well worth getting and cranking on the hi-fi. Bob Seger’s an asshole. I think he’s suing them over that song, but I could be wrong. I clapped. I sang along. I took pictures. My voice got hoarse.

Blood and beatings, like a small world of Rodney Kings: Perhaps I’m not privy to inter-skater rivalries; companies toeing off like Crips and Bloods. Perhaps I’ve just mellowed the fuck out. Then, like weeds in a parking lot, fights just sprung up. Ten of them that I saw. Full-on fisters. Lips swelling. Eye sockets blackening. Cold-cock sucker punches. Ribs being kicked. Six-on-ones. Screaming girlfriends. Slurred defenses. Heads nockering against walls. I did a lot of sidestepping. Cops came. I went to take a pee as they were shooing everyone out while someone yelled that his dad owned Thrasher and all the pigs would die. I didn’t quite make it to the bathroom, but caught a glimpse in the mirror. About fifteen of the Fillmore’s staff was in the powder room, all of them bleeding and licking their wounds. Word is that they’ll never have punk rock at the Fillmore again. As an interesting aside, Slayer had been at the venue several days prior. It was a genteel affair. To be sure, much hair was banged back and forth, many $80 hockey shirts were puchased, but the bouncers had remained unsullied and unbloodied. Not to say I’m proud that folks got snockered, it just puts a little perspective on the evening. Perhaps there’s a lot more piss and fire left in the chasm where skating and punk meet than most people realize.

Final recap: Good show. Bad venue. Lindsey gave it her all. Punk and skateboarding still go well together. I had a good time.

MUSIC FROM THE FILM: Vi Kommer Til A Fa Deg: CD