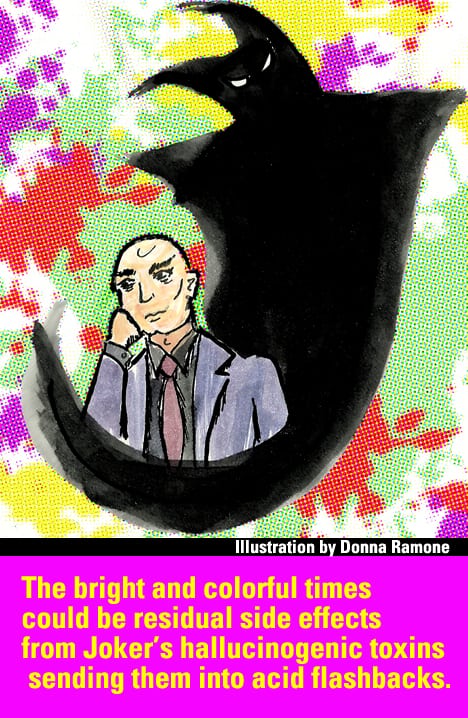 One of the Batman comics’ best runs for writing ended recently. I’m a comic book nerd and a Batman disciple. So, it goes without saying that I was little sad to say goodbye. It was a seven-year story, after all. That’s a long time.

Grant Morrison is a comic industry god. If you aren’t a comic book reader, I’d recommend checking out We3. It’s a short series about three animals surgically built to be military fighting machines that use those weapons against their animal testing lab scientists. His shit usually goes deep. Not to become philosophical about it, but his stories tend to explore characters beyond good and evil.

And, he didn’t disappoint in his opportunity to write an extended Batman story.

I’ve managed to find and read most of his run on Batman in limited physical comic book form, but mostly through trade paperbacks you can find at a local library. As a tip of the hat to Morrison, I’m listing out some of my favorite characters and events from this epic run.

I’ll do what I can to not spoil everything, but it’ll require some spoilers. And for the sake of space, I won’t get all nerdy with explanations for things he didn’t originally write. Wikipedia does a fine job of explaining the basics.

Damian’s storyline is the longest-running, single thread in the series.  Readers discover in the first issues that he’s the ten-year-old son of Bruce Wayne and Talia al Ghul, the daughter of the demon Rās al Ghul. (Again, Wikipedia can tell you everything that makes this offspring the cross between Batman and the devil.)

At first, he’s a spoiled brat who believes that—through his name—he is the heir to everything Wayne, including being the Robin at Batman’s side. As a trained assassin, he doesn’t believe in the No Death rule that Batman has.(Batman is unwilling to kill as a form of justice. He allows the system to work its course, despite its many flaws. It all stems from the loss of his parents and not wanting to stoop to the level of the criminal who killed them.)

And there’s intrigue immediately because everyone knows that this is Bruce’s responsibility to become a father. The little bastard is just as angry and tenacious as his namesake. In the most perfect way, Morrison figured out a way for every other character to deal with Bruce Wayne’s inner demon.

Of course, as comic book circumstances go, Bruce Wayne is rendered unable to be Batman. Dick Grayson, the first Robin, is forced to take on the mantle. Damian becomes his Robin. The new intrigue has the switched dynamic of a fun and loose Batman running with a dark and brooding Robin. It was honestly the most fun I’ve ever had reading Batman. A sacrilegious part of me wished Bruce would never return.

Though, as circumstances in comics go, Bruce Wayne returned in good form and replaced Grayson as Batman. Damian remained Robin. The new dynamic was a Bruce Wayne, who understood his precious relationships with the few people in his life, and his son, Damian, who wanted to prove himself worthy of his father’s respect.

Again, father and son clashed until faced with the ultimate evil. As father and son fought side-by-side, there was a beautiful moment of realization that Damian went from the spoiled brat  everyone hated to the perfect hero everyone loved.

The motif of sidekicks taking on the big chair looms throughout the series. Morrison ultimately created a character that would be the perfect Batman in the future. (He only teased it for an issue in Batman #666.)

2. Morrison’s Homage to Batman’s Past

Batman has been around for almost seventy-five years. (Detective Comics #27, the first appearance of Batman, released in May of 1939.) His history is as strange as the mythos formed around him. He originally had a gun and fought with vampires. In the sixties, he and Robin would have bright and colorful adventures in space and alternate dimensions. It wasn’t until Denny O’Neil and Neal Adams took hold of the character in the seventies that Batman returned to the dark. And Frank Miller returned him to the grim in the eighties. Since then, he’s become the superhuman myth we know him as today. However, we’ve also lost everything that happened before Frank Miller’s realistic vision of the Caped Crusader.

Grant Morrison brought it all back and chose to imagine that every story in Batman’s vast catalog happened. Morrison calls it “The Black Casebook.” He has talked in interviews about how it’s feasible that a nineteen-year-old Bruce just starting out as Batman used a gun and would later make a rule against them. The bright and colorful times could be residual side effects from Joker’s hallucinogenic toxins sending them into acid flashbacks later. Robin grew up and became Nightwing around the time that O’Neil and Adams started making things dark; and, therefore, Batman lamented losing a son-like figure to age.

One of my favorite explanations of the past is from the sixties, when Batman opened a portal and met a Batman from another planet called Zur-En-Arrh. Morrison wrote it so that Bruce managed to create the identity of the Batman of Zur-En-Arrh as a back-up within his subconscious to take over should Bruce ever have his memory wiped. We’re talking about a human treating his brain like a hard drive.

The Batman of Zur-En-Arrh wore a red, yellow, and purple Batsuit. When Bruce Wayne’s memory actually gets wiped in the story, it takes only a short journey with a kind homeless man to find the word “Zur-En-Arrh” spray painted on an alleyway wall. And he’s set off.

The Batman of Zur-En-Arrh is a savage Batman. It’s Batman’s unbridled Id. He works at peak energy without a care for the limitations of human energy supply. His spirit guide to remembering everything is the Imp from the fifth dimension, Bat-Mite. (Another relic of the fast and fun fifties and sixties tales.) As Batman began returning to reality with his original senses and memories about him, he turned to a fading Bat-Mite and asked, “Are you really an alien hyper-Imp from the fifth dimension, or are you just a figment of my imagination?”

As Bat-Mite faded into the ether, he replied, “The fifth dimension is imagination. Some World’s Greatest Detective you are.”

I’ve already talked about the motif of sidekicks. Grant Morrison used it as a gateway to talk about the greater theme of Fathers and Sons. In a way, each sidekick of Batman’s is a Son of Batman. Not only does Bruce Wayne come to terms with being a literal father, but he also understood his role as a father figure to the other sidekicks. It’s even more touching if you remember that Bruce’s father was killed; and, therefore, he held no blueprint to being a father himself. Batman is a man who succeeds because he seeks to be ready for any scenario before anything begins. In a minute, he was thrust upon fatherhood and forced to succeed by learning on the fly. Doesn’t that sound like fatherhood in general?

The point earlier about Damian being a tangible form of Bruce’s inner demon allows for every other character to face it. Tim Drake, the third Robin, became a costumed hero without the death of his parents (it came later, but it wasn’t the cause). Why? Dick Grayson is a grown man and could be a hero for any other city, but he chooses to remain in the shadow of the Bat. Why? Alfred is paid help, but he’s the one man Bruce trusts more than himself. Why? In a way, Damian’s arrival makes those questions relevant in ways that characters themselves couldn’t ignore.

Morrison helps explain that Drake’s greatest desire is tousurp Batman as the World’s Greatest Detective, and what keeps him in costume is training for the reality that investigating criminal behavior has a physical side to it. Dick Grayson feels indebted to Bruce for taking him in and guiding his life in a positive way when everything after the murder of his parents could have gone so wrong. Even Alfred is brought out to show that he made a promise to Bruce’s parents to always protect their child, and he continues to aid Batman despite what is probably a large sum of money sitting in his personal bank account. (If not from a lifetime of serving the Waynes, then for his ability to maintain the secrets and identity of the city’s richest man.)

And in an effort to prove what humans are capable of, Morrison’s run could also be seen as the theme of “Man versus […]” As the world is filled with superheroes, Morrison explores what makes Batman and his allies so human. They all have the choice to do what they do, and they give of themselves so selflessly.

Morrison went to great lengths to prove those two concepts.

Bruce Wayne is a true specimen of what a human being can be. With intense studying of the law and the mind of a criminal, a human can be the World’s Greatest Detective. With a diverse mastery of several different fighting styles, a human can be an unstoppable force in combat, even against larger numbers. With a mind willing to be pushed to the brink of insanity and back time and again, a human can also run around in a costume, acting as a vigilante for justice. However, no matter how great this human is, he will still age and can still be shot dead.

And so, Morrison put Bruce through the gamut. He was forced to outthink an organization who knew him as well as he knew himself. He stood face-to-face with the god of evil, Darkseid, and sacrificed himself for the good of the universe. He returned from Darkseid’s “Omega Sanction” with his wits intact. He became a father. He went up against a terrorist organization that put a half billion dollar bounty on the head of Batman. Bruce did it all in Morrison’s run, and we as readers discover just why Batman is the only true human superhero in the Justice League.

Meanwhile, even in the wake of Bruce’s disappearance into the Omega Sanction, Dick Grayson becomes Batman. When we glimpsed into the future for Batman #666, Damian takes up the role as Batman after his father’s unfortunate death. When Bruce returns from the Omega Sanction, he gets the Batmen of the World back together to start a new enterprise called Batman, Incorporated. (It’s at once another forgotten callback from the past and homage to the Bat-Manga series from Japan.)

The first page that begins the Batman R.I.P. storyline is Batman and Robin on a rooftop and Batman yelling, “You’re wrong! Batman and Robin will never die!” It’s cryptic because the pages that follow introduce the villains without any context to that first page. Yet, it sums up the entire story in one page.

There’s so much more to highlight, but it would mean spoiling major plot lines. It’s difficult to really articulate an appreciation for what Damian went through in his transformation without explaining it. The trials of Bruce Wayne being the ultimate human must be shown rather than told. And so, I’ll end with the complete reading list in trade collections. Find them from a friend or at the library, because it’s a Batman story every fan can enjoy. I know it’s a lot, but the journey is well worth it.

“it’s simple, it preys on the mind… the ultimate gag… now you here, now you ain’t…get it?! but it doesn’t matter, see, because every single time I try to think outside his toybox… he builds a new one around me – apophenia – I’ve been driven literally in.sane.trying to get him to loosen up – well, now – now it’s your turn”

–The Joker to The Black Glove in Batman R.I.P.