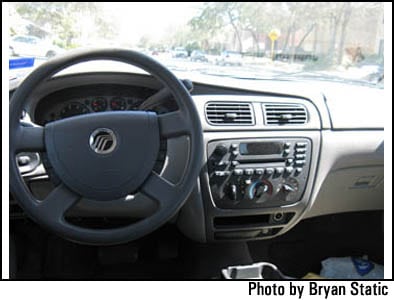 “Is everything all right in there?” My father has just entered my bedroom. I’m sure he knocked, but the stereo was up loud enough that any noise outside of the room was lost in the barrage of sonic blasts. After the initial shock of seeing him in my sanctuary, I reach over and turn down the volume.
“Uh… yeah…” My response is probably not what he’s focusing on. More than likely he’s noticing that his son is sweating and leaning on a microphone stand. That fact that I am shirtless might also have something with it.
“Well, we heard some banging downstairs.” Note to self: Do not pogo on the second story. “We just wanted to make sure you were okay. Do you mind turning it down?”
“Yeah, sure, I’ll do that.” A second or two of awkward silence passes before he finally closes the door and walks back downstairs.
It’s at this moment that a crucial decision needs to be made, do I stop as to avoid further embarrassment or do I continue pretending to be the lead singer of The Arrivals for a few more minutes? I let the last few seconds of “Company of Salt” finish out and place the vinyl away. Humiliated and defeated, I don’t even think about staying in my room to listen to the flipside.
As far as I can tell, I’ve always suffered from Chronic Rocking Out Syndrome (or CROS). I was first diagnosed with the disease when I was three years old and sang AC/DC’s “T.N.T.” every time I realized that I wasn’t singing it out loud. The symptoms got worse as I got older. I began playing air guitar, I found more and more that I was drumming along to the rhythms in my head on any surface available, and, when I enjoyed the music that was playing, I started to—oh, god, this is so embarrassing—I started dancing.
I knew I hit rock bottom when my family caught me in a leather jacket and sunglasses singing Clash songs while posing in front of a full size mirror. I broke down crying, I was addicted. “Mom, Dad… I need help.” It was a very emotional day.
Now thanks to modern science and medication, I’m a stable individual. I can walk around town and listen to a Scared of Chaka song and say, “Hey, that one’s catchy,” without the horrible embarrassment of a CROS episode. The way people look at me is normal now. It’s peaceful. It’s… boring.
Okay, the last three paragraphs were a lie (except for the AC/DC part), but if you couldn’t figure that out, maybe your attention should be elsewhere. Though my story of my decline with CROS is a fabrication, it feels more real every time I think about it. The sacred art of rocking art is treated like a disease.
I will openly admit that I’m found rocking out without realizing it. This act is most frequently seen while I’m in my car. Every red light, every stop sign, I stop and the people next to me glare through the windows at the kid screaming his lungs out to a song they’ve never heard. Then they laugh. They laugh like it’s the funniest thing they ever did see. Look! It’s someone enjoying music! That’s not allowed! Point! Point and laugh and make him feel like he is inadequate because WE ARE NOT CONTENT WITH OUR LIVES AND WE MUST MOCK ALL THOSE WHO STRAY FROM THE PATH! Well, fuck you guy in the pick up truck with the fake rubber testicles hanging on the back! Just because you find no satisfaction in listening to your Linkin Park records - don’t try to tell me it’s not Linkin Park, because I can hear your goddamn stereo over mine - doesn’t mean you have to share your displeasure with the rest of the world.
I give up. I shall no longer withhold the urge to rock out. If it’s a great guitar solo, why don’t I have the right to act like a fool on my own accord? I’m going to sing along with all the songs that I feel like singing. There is no reason why I shouldn’t. I’m going to fight for a world where people can start an air band in their car with friends, where people raise their fists and randomly sing out Ramones lyrics, where no one thinks singing along is taboo.
You can laugh all you like, but you will be promptly ignored. Every one who wants a part of this, I’ll be by the stereo. The Air-rivals need a new drummer.

Share your favorite puns and inquire about the number of songs I know all the lyrics: [email protected]