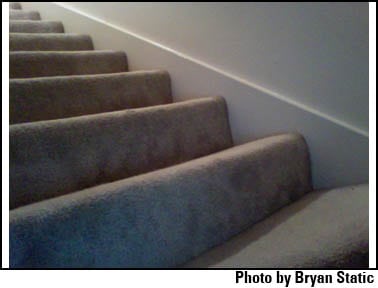 There’s A Metaphor in There Somewhere: Column #11

This one’s for Marco, because my ideas just aren’t good enough.

Artistically—or spiritually if you will—there’s nothing quite like the moment where something just clicks. Maybe you’re writing a story about robotic vampire overlords and you get stuck on something that you had overlooked before. Then this magical moment occurs and a mixture of anger and joy takes over. “I’ve got it! The cyborg policemen are powered by garlic!” Joy at the fact that you’ve finally figured it out, and anger because it took you this long to finally fix it. And everything else falls easily into place.

I’m nobody. I’m quite aware of this fact. There is very little I could ever do to rise above the level of P-list celebrity. (I think I’m X-list right now. Y-list being the guy who publishes one zine, gets a good review, and then never puts out issue 2.) That’s why I’ve dedicated a great amount of my time being the most prolific nobody I can be. I’ve written comic books, directed short films, and recorded music with various people at various places. Hell, if you looked hard enough, you could find my voice somewhere on the Internet. I’ve tried my hand at a lot of things, but more often than not, there’s no connection, nothing to make me want to continue my endeavors.

When I was younger I had this notion in my head that I would be the greatest artist known to man. (I also had the notion that I would be a helicopter. A small part of me still hopes…) There’s a very big gap between a young person’s dreams and ambitions and reality. I was pretty terrible artist. Whenever we showed off our finished projects in art class there was a very abrupt negative shift in quality when you spotted my piece. There was a day where I consciously put the pen and paper down and never picked them up again. Though, at that point I couldn’t articulate my frustration over my work; it was on a very primitive level the same reason why I give things up now. It just did not click.

The time varies greatly trying to figure out if things work or not. It took me five years for me to understand that classic rock does not click with me, yet only two months to figure out that punk does. And there’s that moment. I always remember it. It’s the one moment that makes me want to do what I’m doing for the rest of my life. For me, it was a Bad Religion album. Listening to Recipe for Hate and screaming the words to “American Jesus” for the eighth time that day, the light bulb flicked on at the end of the song. “This works. I need this.” And look at me now, ma!

If you’re a regular reader of these columns, you might recall me doing one about all my previous experiences with bands. There was a very crucial piece of information I left out of that column: most of those bands didn’t last over six months. None of them clicked in the right way. Which was, in retrospect, what I was trying to say, but when I was writing it, I was just trying to say that I had been in bands and I had a new one.

Well, it looks like I’ve done that again. I’ve started a new band since then, with Marco and Coppins. There was this moment when we were jamming; playing a song I threw together the first time we met. Marco was bleeding everywhere from his new tattoo, I was sweating from the incredible Texas heat in the oven of the garage the Coppins’ has and Coppins kept getting hungry, but it was coming together so perfectly, I just did not want to stop playing. I was excited over something I am usually incredibly self-conscious about. I thought in the best way possible, “I would not mind doing this for the rest of my life.”

Again, words failed me. I suffer from a constant case of Esprit d'Escalier (look it up, you monolingual jerks). It was a few days latter when Marco said what I couldn’t put into words: it clicked. Click. It’s such a simple word, yet it just… clicks. It’s really an amazing feat when you have different people all working towards one goal and it feels like it’s one hive mind. I know that my excitement for this will wane and fluctuate, as all excitement does, but right now I’m happier than I have been in a long, long time. It’s probably the best thing to happen to me since I started doing these columns, where you kind folks humor me and my inane ramblings.

Now if you’ll excuse me, I stayed up all night writing this and I’ve got band practice tomorrow. Wish us luck.

Tell me your thoughts on how to pronounce Tomine (toe-mine or to-me-neigh?) and/or how I should arrange my record collection at [email protected]