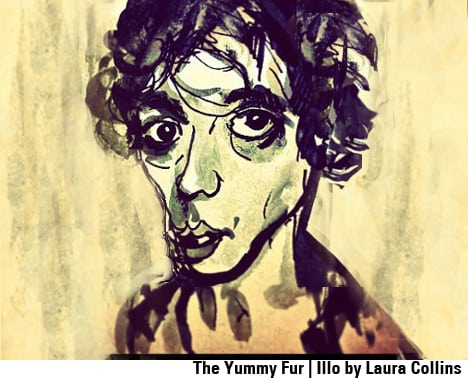 The Yummy Fur’s Existence Is a Sincere Problem

Scottish post-punk band The Yummy Fur have a lamentably small presence on the internet, making it hard to accurately convey their music. But there is a moment at the end of a live video of The Yummy Fur’s Sexy World that sums the band up far better than anything I could hope to cobble together.

As the shambling, infectiously woozy song ends, singer/guitarist Jackie McKeown walks to the keyboard and, rather than tune his guitar, turns the pitch knob, making the synths play in tune with him.

I understand if you are not familiar with this band, but it is one you should know. Not just because they have managed the rare feat of achieving a unique, individualized sound in a relatively homogenous genre but because they stand as a clear example of how journalistic narratives about music break apart upon closer examination. And if not for the fact that they are an interesting band that did not kowtow to trends—aligning themselves instead along that hidden axis where The Soft Boys meet The Fall—then you should know them simply because drummer Paul Thomson and guitarist Alex Kapranos went on to be in that band most pop-music-aware punks either kinda-liked or hated-on-principle, Franz Ferdinand.

Let’s talk briefly about Franz Ferdinand’s cultural relevance. Their eponymous first album was released in 2004, at a time when everyone was just barely recovering from the backwards cap years of the late 1990s and making those tentative first steps into the hazy fog machine of the nü millennium. To set the scene, Pitchfork’s top fifty albums of the year for 2004 included Franz Ferdinand, as along with The Walkmen, The Futureheads, Interpol, TV On The Radio, and Les Savy Fav. And let’s not forget that the #1 album for the previous year was The Rapture. Taken together, this gave the impression that all music in the post-Faint era was shot out of the womb wearing a black suit, chain-smoking, and wanting to DANCE!

While I respect the importance of mass music journalism to make people aware of music they might otherwise have missed, it is important to keep in mind the way it, as a discursive object, functions. The reader must learn to create a distance between the perception presented in these reviews, year-end lists, and features,  and the reality of the music being released at any given time, because these two things are often quite different. While on the one hand, building a narrative out of the year’s releases helps create a sense of logic for the reader, a story that contextualizes each (reviewed) release, it is often greatly at odds with the reality of what is available.

Perhaps you see what I am getting at here. It is not that everyone who liked The Rapture, and The Walkmen, and Interpol, and Franz Ferdinand, did so because of some massive post-millennial dread. It is because people read that this was the music they should be listening to, and the journalists built their case through the classic image of people giving up on adulthood, going to the club, dancing, fucking, smoking, and allowing the music to do with them what it will. To many, this is an alluring story. And it obviously still is, given many recent, inescapably huge singles which reiterate that idea (Britney Spears’ chorus: “Dance until the World Ends,” The Yeah Yeah Yeahs’ chorus “Dance until you’re dead,” etc.), many of which could probably have been the tagline of Pitchfork’s entire output circa 2003-2004. This story worked particularly well because it had the added effect of convincing those who bought into it that they were crusaders against some perceived social decay, as though four on the floor and bald ‘80s nostalgia were forms of resistance. In actuality, it helped establish Pitchfork as the media juggernaut that it is today and further subdivided underground music into various shades of commercial pop. Despite the seeming glut of dancepunk records being released at that time, and the sudden influx of suburban kids into the clubs, it was all just a narrative like any other. But narrative does more than just situate the claims of mass media music journalism. It is the key which allows them to continue to justify their own existence, as well as continue to attract ad revenue: an artificial, constructed form of legitimization. Without it, the tastes they stand for are merely that: tastes.

Case in point (and we are arriving at our very point now): The Yummy Fur. Their 1998 album, Sexy World, reads like a damage report from the scene that Pitchfork imagined spontaneously following on the tails of the ‘90s. Not only was this seemingly new, dancey, world of the early 2000s not something which arose due to any recent “economic misery” or “pedophilia,” it wasn’t really anything new at all. These same scenes, so evocatively imagined by Pitchfork, Spin, NME, and others as particularly representative of music in the early 2000s, had already been lived through, and others were already alienated-by, ostracized-from, and bored-with this world. The eponymous first track of Sexy World spells it all out, beginning with going to a club, checking out the “gallery of angels,” AND ultimately finding nothing but “Young kids and psychos / in Sexy World.” These lyrics and many others point towards an already-present sickened fascination with the glittery nightclub world, bordering on disgust—from the “cigarettes and heroin” of second track “Playboy Japan (1971),” to the “muzak from a deathclub” that throbs crazily out of second side hit “Deathclub.”

Consistently, The Yummy Fur’s music features familiar rock tempos and song structures, but they are fundamentally perverted through the use of constant chromatics, playing rampantly in and out of key, until the songs sound woozy, manic, and about to snap. This is best exemplified by the insane insistence of the guitars in the third track “In the Company of Women,” which takes another song about trying (and failing) to dance and get laid, and twists it tighter and tighter around the root note until it sounds like each one of McKeown’s feral screams will finally sever the bond, shooting it all out into the stratosphere.

The Yummy Fur builds tension exquisitely. It is something that is palpable in all of their best songs. And the tension feels all the more real since so many of them fall in and out of key in a way that makes the pop core of the song sound repeatedly bruised and beaten. The constant threat of falling slightly out of key is often realized and it lends the poppier songs a RARE sense of danger (“Playboy Japan (1971)”), as well as make moments that would otherwise sound Pavement-esque much more reminiscent of their twisted uncle, The Fall St. John of the Cross”

But despite all this, there remains very little acknowledgement of The Yummy Fur in even the smallest of music zines and journals. I would never have become aware of this exceptional band had I not been in the U.K., playing shows with Classics Of Love in 2010. While playing in Glasgow, I was speaking about Scottish music with Adam from the band we played with that night, the Plimptons. Specifically, we were talking about satirical misanthropes The Country Teasers and their significance in Scottish music. After finding a shared interest in both them and The Fall, Adam recommended The Yummy Fur’s album Sexy World. Rarely have I received a recommendation that has been so perfectly suited. The first time I listened to the album, I could hear it. It didn’t even take getting to the chorus of the title track to know that I was hooked.

One of the few “articles” that exists online about the band, posted on Metafilter accurately points out the unfortunate lack of information available and seems to exist solely for the purpose of explaining each of their releases. It does, however manage to raise an interesting point: in 2010 the band reunited for a few shows in the U.K. and U.S. (I saw them at Café du Nord in San Francisco on this tour) to promote the greatest hits album slated for release, Piggy Wings. But in a classically Yummy Fur turn of events, this greatest hits album was never released. The pop specter of easy accessibility, greatest hits, dance, and comfort arose, and then, just as quickly, was whisked back off into tension and uncertainty.

So, what is one to make of this band? Normally in the course of writing about music, returning to a lesser-known band and writing about them is usually done to point out their as-yet-unacknowledged influence. This is almost definitely not the case for The Yummy Fur (unless you count my own bands). It is usually a case of a band-before-their-time, only accessible in hindsight. But in the case of The Yummy Fur what we have is an anomaly. Their music does not sound distinctly “of their time” in the way that Pitchfork insists bands like The Rapture or Franz Ferdinand did, nor does it sound like that of any other particular moment. In a certain sense, they had the lackadaisical tempos of the Pavements and Archers Of Loafs of their time, but they were much more precise and tightly wound. The slower tempos only built greater tension, almost like a pop Flipper—slowing down just to the make the pressure all the more unbearable. And though like another ‘90s mainstay, Guided By Voices, they were clearly acting in the tradition of early pop-weirdos The Soft Boys, The Yummy Fur remains elusive, fractured, and somewhat intimidating, despite their often clear melodicism. Part of the joy of listening to GBV is that feeling that somewhere in you is a songwriter like Robert Pollard, capable of making a thousand people sing YOUR glorious nonsense  TOGETHER. The Yummy Fur, on the other hand, despite some tonal similarities and some equally infectious guitar parts, remain mysterious.

So what do you do when a band resists fitting into the  narrative that has been set up—when the band that existed before that  narrative was spun has already negated it? And make no mistake: if we are to accept Pitchfork’s (or anyone’s) narrative about the musical zeitgeist, then The Yummy Fur’s existence is a sincere problem. For us fans, we listen happily, glad to find something that feels pure and sudden. But are bands that resist giving themselves up to a journalistic reinvention destined to fall into obscurity, as The Yummy Fur has? That is the threat of popular music journalism as it exists today: if you are not written into the narrative, then you do not exist. Either way, The Yummy Fur’s lesson seems clear. Rather than tune up and play along with the rest of the world, change the pitch and keep playing.

Mike Huguenor plays in the bands Shinobu, Hard Girls, and Classics Of Love, and is currently serializing his first novel, Dog Police!, online at dogpolicebook.tumblr.com.