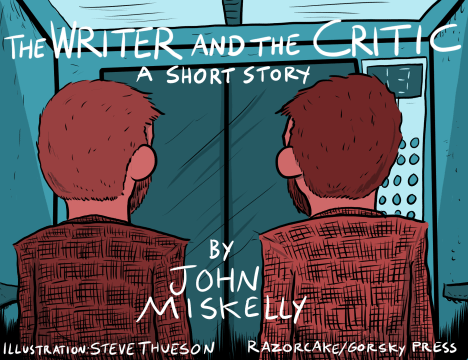 The Writer and the Critic: A short story

Download this short story as an ebook right here.

“Oh fantastic. You again, always popping up where I can’t escape,” said the writer.

“Well, I have to live here, too,” replied the critic. “Let’s just get this over with. You’re going down, I assume?”

“Yeah, ground floor.” The writer narrowed his eyes. “That’s some kind of joke, I suppose?”

“‘Going down?’ You assume I’m going down? Like falling down, fucking up—I detected a tone.”

“Don’t be precious. We’re in a bloody elevator—there’s only so much vocabulary I can use in a space this limited. ‘Would you like to descend to the ground floor, sir?” the critic mocked, “Or arise to a loftier station?’ I can’t account for your neuroticism every time we have to communicate.”

“I just thought I heard a stress.”

“You hear what you want to hear—whatever’s going give you an excuse to sulk.”

“You know, if there’s one thing worse than a bad writer, it’s a bad writer who still insists on living every cliché—moping around all self-involved, self-loathing, melodramatic. You know, you wear the costume very well—it’s everything underneath that’s missing.”

“Well, maybe if you gave me some better reviews!” barked the writer.

“My job isn’t to make you feel better about yourself—it’s to inform. I’m not mom.”

“Sometimes it just feels like you’re enjoying yourself a bit too much.”

“I enjoy the critical process. I’m not ashamed of that.”

“Up there in your ivory tower—”

Suddenly the elevator lurched, shuddered. A growling belch echoed downwards from some unseen mechanism. The writer edged into a corner, palms flat against the mirrored elevator walls. The critic did the same.

“Shit, what was that?” said the critic.

“The fucking thing’s stopped again,” said the writer, jabbing away at the buttons with the steely focus of a determined idiot.

“I’ll call Craig,” said the writer, trying to keep the creeping anxiety out of his voice. Their shared capsule suddenly felt a lot smaller than before. “Hey. Yeah, the fucker’s stuck again. We’re between sixth and fifth, I think. Thanks. And please hurry—this is an extremely awkward situation for both of us.”

“Well, this should be a fun however-many-minutes stuck in here with you whining on,” said the critic.

“It’s not ‘whining on’ to care about my work,” the writer snapped. “There’s nothing wrong with taking yourself a bit seriously from time to time.”

“You think I don’t take writing seriously? I put myself through it, don’t I? Time and time again, reading your stuff, trying to give some constructive criticism.”

“It’s not martyrdom, it’s judging and deconstructing someone else’s effort and confessions, ignoring the blood and sweat and guts we leave on every sentence—just mopping it aside and shrugging your shoulders and calling it ‘professional objectivity.’ And ‘constructive’? Sadistic evisceration more like. I could build a pretty good case for psychological abuse against you, against your ilk.”

“And I could see some pretty substantial legal complications with that case, given our relationship. And what the fuck would you have us do, applaud the effort and time? Congratulations, you managed to spunk out some stuff onto a page in the tiny eighty-hour window of free time you have in your oh-so-demanding week. Should we acknowledge effort every time we think something stinks? ‘This film sucks, but I really sense that Mel Gibson really worked hard on this deranged atrocity of a movie, regardless of the many profound flaws contained in this work. Let’s applaud the efforts of Mr. Gibson’s synapses and the calories burned in the making of this heinous turd.’ It doesn’t work like that; effort is assumed. I’m not applauding anyone for getting out of bed. Michelangelo fucking worked—you, my friend, merely dabble.”

The writer stared down at his shoes.

“Don’t put words in my mouth. You’re not Mel Gibson.”

“Well, at least we agree on one thing.”

“I mean, it’d be weird if we didn’t agree on some things. This relationship’s kind of symbiotic, after all.”

“You can say that again. But don’t tell me,” continued the writer, “that you don’t derive a certain kick out of trashing my shit.”

“Me get a kick out of it?” exclaimed the critic. “Speak for yourself. You pore over my shit—you can’t get enough of it.”

“How could I not! You’re everywhere I go. And it’s mostly only when I’m drunk.”

For a moment, the writer, chided, had no reply and stared at his reflection in the mirrored wall.

“I think we could do with a haircut,” said the critic, attempting to divert his observations to another subject, but to no avail.

“It’s just you always seem so much harsher when you’re slamming my work. You’re so much harder on me,” said the writer.

“Have you seen some of the stuff I’ve said about Hemingway?”

“And it’s only because I’m more invested,” continued the critic, ignoring the jibe.

“So you admit you’re not completely objective,” said the writer.

“How could I possibly be totally objective when I know the person like we know each other? Also, come on—I’ve said some nice things about your stuff. There’s some good stuff hidden away in there. There’s just also a lot of… packaging.”

“Steady on there, champ.”

“Just…let’s always think twice about that shit,” said the critic.

“How about a Russian gymnast’s parents?” said the writer?

“Now you’re being obnoxious. At least I hope you are because it scans horribly and it’s nearly as hackneyed as the one before,” said the critic.

The writer smirked like a petulant teenager. The critic smirked back.

“Why’d you always have to dredge this shit up anyway?” asked the critic, “Why’d you do it to yourself?”

“Like you said, it’s symbiotic, cyclical, and I can’t exactly leave. We’re kind of trapped in here, if you’ve noticed.”

“You can say that again,” said the critic.

“What the hell is Craig doing, building a whole new goddamn…majiggary thing?”

“Wow, you are truly a master of the English language. Hey! We’re moving!”

Again, something—somewhere—awoke, stretched, squealed, and the elevator sprang to life with a jolt.

They passed the remainder of the journey in silence.

The doors slid open to reveal a small table and chair. A pair of legs in grease-smeared overalls poked out from beneath a broadsheet newspaper.

“Sorry, mate. Old building. Tough getting parts for these old systems. The cables, etcetera…” Craig trailed off with a shrug.

“Yeah I heard you the last six times,” said the writer.

“Where’s the other guy?” said Craig, tipping the top corner of his paper downwards and peering out at the writer like a curious rodent.

The writer stared back blankly.

“‘Other guy’?” he said, halfway out the front door, shouting over the invading din of the mid-morning street.

They stared at each other for a moment.

“He’s right there,” said the writer, gesturing with a thrust of his chin to a point just over the handyman’s shoulder.

“I was just checking the mailbox,” said the writer’s twin brother and, rather annoyingly, accomplished critic, appearing from the darkened limits of the ground floor hallway.

Craig looked over his own shoulder into the gloom.

“And tell his Lordship I’m withholding rent ‘til he gets the fucking lift fixed,” said the writer.

“Right, I see,” said Craig, shooting him one more furtive glance and disappearing hurriedly back behind the sports page.

“You sure told him,” said the critic, a moment later.

“I think I had him thinking I was some kind of schizophrenic for a second there. Actually, that’s not a bad idea,” said the writer, reaching into his bag for a notebook.

“Put it away,” said his brother. “Fight Club, Birdman, A Beautiful Mind, The Double. Jesus, have you ever had an actual genuine idea in your life?”

“The double in The Double’s an actual guy,” said the writer.

“He is?” His twin stopped in the street. “I guess he is. My point still stands, though. Anyway, see you later. Oh and mom wants to know what you’re doing for Christmas.”

“I already told her twice already,” the writer spat back, straight into the face of a passing man with a briefcase in one hand and a child in the other.

“Who’s that man talking to daddy?” asked the child.

Bio: John Miskelly is twenty-nine going on seventeen and is perfectly in possession of all his mental faculties. Kurt Cobain and Terry Pratchett are definitely not right now sitting on his kitchen floor chatting shit. He lives in Valencia, Spain. More of his stories can be read and downloaded on this very website. He tweets indulgent shite from @JohnMisk like all the other needy pricks you know.