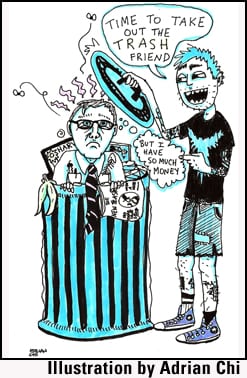 The White-Trash Scapegoat: Contempt for white trash is a point of bipartisan agreement.

The financial elite are stealing America. Under Democratic and Republican administrations, the rich seize ever more of the nation’s wealth—especially during Wall Street-created crises. In fact, the economic cycle now consists of a series of recurring scams. At its core, the present crisis is a repeat of the Savings & Loan boondoggle of the late 1980s and early ‘90s. Both followed the same trajectory: deregulation, banker fraud, stock-market nosedive, insider bailout, recession.

The scale of the theft is no surprise when compared to similar cases in history, but the lack of opposition is remarkable. Why don’t the American people unite against the rapacious elite? The answer: “scapegoating.” When confronted with populist anger, the rich and their allies simply direct it toward other, much more vulnerable targets. There has been useful reporting on the practice of blaming the country’s problems on racial minorities, non-Christians, immigrants, and gays. Even so, the media consistently ignore one group of scapegoats—except when scapegoating them—working-class whites, or “white trash” in elitist terminology.

The best way to understand the crusade against working-class whites is to look closely at a celebrated expression of it: Tad Friend’s New York magazine article “White Hot Trash!” Widely reprinted, the 1994 piece fit neatly into a pervasive media campaign that drew public attention away from business scandals by demonizing workers and the poor. Such tactics paved the way for the (Non-Corporate) Welfare Reform Act of 1996.

Surveying the national scene, Friend saw an army of vicious white trash on the attack: “white trash best encapsulates the galloping sleaze that has overrun both rural and urban America,” (italics original). When he described these enemies of decency, his words struck a familiar tone. In 1899, Rudyard Kipling characterized the western empires’ colonial subjects as “half devil and half child.” For his part, Friend wrote: “White-trash behavior is defined by childlikeness and the headlong pursuit of easy gratification—quite often, sex.” Throughout the article, he mixed moralizing with voyeurism and treated character as a function of social background. Weighing in on Paula Jones’s sexual harassment suit against Bill Clinton—the tabloid news item of the day—Friend turned the case into a question of lineage: “our president’s family tree has bubbas on every branch.”

The New York writer produced a long list of offenses and invariably found white trash at the root of the evil. Whether it was crimes against high fashion (“candy-apple lipstick, chipped cherry-red nail polish, fishnet stockings . . . tattoos”), going to strip clubs (“places like Stringfellow’s, where a table dance costs $20 and where men in ties and suspenders watch topless women crawl around”), altercations with the police (“consider slaphappy Hungarian Zsa Zsa Gabor”), or even murder (“Any vestiges of our expectations about guilt . . . vanished with the Menendezes”), one gang was behind it all.

Many of the specifics in Friend’s bill of indictment are absurd, but there is a more fundamental problem with his analysis. Why do the rich feature so prominently in his rogues’ gallery of white trash? The Menendez brothers grew up in a wealthy (not to mention Hispanic) family. Zsa Zsa Gabor also came from a well-to-do background. Ties, suspenders, and $20 table dances also don’t fit the white-trash profile. The writer explained: “A clear symptom of the white-trash epidemic is that trash signifiers and behavior have become slipperier.” Watch your step, rich people. You might slip and start acting like white trash.

To support his claim that a light-skinned, proletarian horde was razing the civilized world, Friend cited the worsening poverty rate among whites in the U.S. and offered quotes from “scholar Charles Murray.” (Murray and Richard Herrnstein’s fatuous book The Bell Curve, in which the authors labeled African Americans and the poor genetically inferior, was published less than a month after “White Hot Trash!”) “White trash’s connotations increasingly describe America,” Friend summarized. “The country is becoming underclass-laden, illiterate, promiscuous, and just plain fat.” He evidently believes that poverty and illiteracy are personal choices, on a par with overeating. “The country is becoming underclass-laden” is a revealing statement. According to Friend, poverty is something that the poor do to the nation rather than the other way around.

Friend’s attack was wide ranging, but he never strayed far from the topic of sex at its most lurid. This passage demonstrates how closely poverty and depravity are linked in his mind.

“[Courtney] Love’s delight in looking like ‘a 14-year-old battered rape victim,’ a ‘kinderwhore,’ [Friend did not provide the source(s) of those quotes] is a nutshell of white-trash chic. So, too, are the suggestively named Tease-brand baby-doll T-shirts, which evoke a Lolita-at-the-Dairy-Queen thing. (Real-life Lolita Bridget Hall, the 16-year-old model with an eighth-grade education from Farmers Branch, Texas, stayed with Ford Models head Eileen Ford when she came to New York but refused to eat her chili because it didn’t come from a can.)”

How did Bridget Hall get to be a “Lolita”? Are all young, female models Lolitas, or just those whose parents could only afford canned food? There is certainly room to criticize the photographers, clothiers, and advertisers responsible for producing sexualized images of models who resemble (or are) children, but why denigrate the model herself? An honest treatment of the issue would require investigation of the fashion industry, the posh snobs who run it, and the customers who pay colossal sums for its wares. Then there are the magazines that devote obsessive coverage to the details of models’ lives. For instance, New York now offers an online profile of Bridget Hall, including the names of celebrities she has dated and a list of her key characteristics as a model: “Body, Cheekbones, Hair.” It is easy to see why Friend preferred to place blame for the fashion world’s Lolita fixation on the narrow shoulders of a girl from an impoverished, rural background.

You probably won’t be surprised to learn that Friend resorted to this film reference: “Like the urbanities in Deliverance, we have found ourselves in the grinning clutches of sexually predatory backwoodsmen,” he bellowed. “White-trash culture commands us to ‘squeal like a pig!’ And we’re oinking.” There is no stopping the white-trash war on society. By Friend’s lights, even white-collar crime is a blue-collar problem: “Whitewater, though numbingly complex, is at bottom a pure good-old-boy scam.”

With that claim, he went too far. Between overeating, the headlong pursuit of sex, command performances on Cops, and forcing businessmen to frequent strip clubs, there hardly seems to be enough time in a white-trash day to devise new ways to evade financial-industry regulations. At the least, Friend should have admitted that his stereotype of the lazy, white-trash slob was inaccurate.

Of course, Whitewater amounted to only a small sidebar on the Savings & Loan crisis, which was still siphoning off billions of tax dollars when New York published its screed against white trash. Come to think of it, the chief perpetrators of the S&L bailout, President George H.W. Bush and his treasury secretary, Nicholas F. Brady, hail from the same old-money background as Tad Friend. As a matter of course, all three attended posh prep schools and Ivy League universities. The grandson of a famous industrialist, Brady went to Yale, where the Bush clan has been a fixture since the 1840s. Friend’s family tree has Ivy aristocracy on every branch: one of his ancestors was the first president of Yale. It is not surprising, therefore, that he decided to give it the old school try and tell his readers that society was rotting from the bottom rather than the top.

Though the article was syndicated nationally at the height of political correctness, no one in the media seemed to notice anything wrong with it. Friend became a staff writer for The New Yorker in 1998, and he included “White Hot Trash!” in a 2001 collection of his magazine pieces. Had he chosen just about any other group as the target for his blunt expressions of hatred, his tenure as a writer for top magazines would have been cut short in favor of a challenging new career as Michael Savage’s on-air sidekick. Class bigotry, on the other hand, is considered perfectly respectable.

When it comes to scapegoating working-class Americans for the sins of the elite, Tad Friend is one example among many. After the billionaire-funded, corporate-shilling Tea Party emerged, Bill Maher, Janeane Garofalo, and other liberals called the group’s members “rednecks” and “hillbillies.” Some liberals still apply the “hillbilly” epithet—and other disparaging terms for low-income whites—to the Tea Party, even though an April 2010 CBS/New York Times poll showed that the typical Tea Partier has a higher income than the average American and is more likely to possess a college degree.

Liberals’ contempt for right-wing “rednecks” caused a mighty outcry at Fox News Channel: Conservatives are always ready to pose as defenders of everyday folks against liberal smears. Pretending to like working people (of any race) is a tough task for right-wingers, especially when Republican politicians need fall guys. In 2004, published photos revealed the grisly results of the Bush administration’s systematic use of torture against prisoners of war. The president, vice president, and defense secretary were directly responsible for the brutal policy, but not according to Rupert Murdoch’s New York Post. In the pages of that newspaper, rightist pundit John Podhoretz blamed Bush’s torture program entirely on low-ranking soldiers. He also condemned a large segment of society, calling the soldiers “white-trash ghouls.” Conservative would-be populists, usually so easy to enrage, remained silent when Podhoretz and Murdoch showed what they really thought of working-class whites. Contempt for white trash is a point of bipartisan agreement.

For decades, the country’s elite has thwarted populism by making scapegoats of the powerless. Our economic nightmare will never end unless Americans learn to see through that tactic—even when the scapegoats are working class and white.