One of the things I liked most about being a teacher is that whenever people asked me what I taught my students I always told them "to be suspicious of their government." It was a great way to piss off people who are easily pissed off, like my parents, whose sense that I was finally doing something meaningful with my life was ignominiously shat upon. My smug punchline is The Unseen's battle-cry delivered from the front lines of protest punk. Claude Bessy, a.k.a Kickboy Face, once described a Sham 69 record as "one long explosion of frustration" and that's exactly what The Unseen's performances are like. Seeing The Unseen is like going to see two bands. They start the set with Paul, formerly of the Pinkerton Thugs, as frontman with Mark manning the drums. Then halfway through the set they switch. Part Herbert Marcuse tract, part guerilla punk primer, their albums are the soundtrack for the next assault on the WTO (at least until you get to the totally fucking lame credibility shredding bonus track).
With waves of meaningful patriotism melded with knee-jerk jingoism sweeping the country right now, it's possible their defiant stance could become dangerous again - just like those might is right days of the Reagan regime. But The Unseen aren't anarchists plotting to topple the state. They're a band, a very intense, high energy band with a fondness for my two favorite words in the English language: Fuck you. 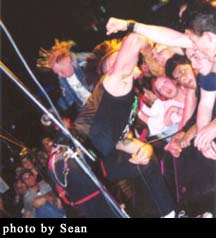 $: What makes you so special?
Mark: Nothing actually. Nothing.
Paul: People like us. I don't know why. But we seem to do all right.
$: I thought I'd give you a little East Coast attitude to make you feel at home.
Mark: I like it. I definitely feel at home.
Paul: That's the problem with the West Coast everyone's too friendly. I don't understand why.
$: Except in the car, on the road.
Paul: That's one thing Boston has in common with L.A.
$: Have you ever written a song about a boat.
Mark: About what?
$: A boat.
Paul: A boat?
Mark: Never.
$: What led to your signing with BYO?
Paul: They approached us. They [the Sterns] came to see us at the Troubadour last spring and they were real friendly. They're pretty much as far as American punk goes one of the best labels. They're great guys and still doing it.
Mark: And they're still punk. We'd rather be on a label with people who are still punk rockers. People that have done tours and know what we have to go through rather than some business man sitting in an office who doesn't know shit.
Paul: We'd rather have someone who is in a band and always been in a band.
$: Did you consider another label?
Mark: We had a few offers. We waited a little bit to make the right decision. Every other record we've done we just jumped on the first offer that came. So we tried to hold out a little bit and we definitely made the right decision.
$: Is A-F out of the record business?
Mark: No, they're still doing it.
Paul: They told us they were so busy with their band that we should look for someone else who can help you out a little more.
Mark: Because we're a band that likes to tour so much and do so much they said that we should try to find a bigger label that can help us out more financially. Because it's expensive to go on tour. You always need money to buy a van. Or buy tickets to go to wherever. If we go to Japan or Europe no promoter wants to pay us to go over there so it's all got to come out of our pocket. Since we're always on tour we can never save enough money we just take loans from the label. We went to Japan. We had to borrow money. We went to Europe. We had to borrow money. 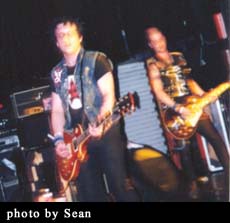 $: Was it worth it?
Mark: We had a blast, but we didn't make much money. But we had a great time.
$: You're not from Boston per se. Do you consider yourself a Boston band?
Mark: Yeah. Definitely.
$: Where exactly are you from?
Mark: We're all from the suburbs of Boston originally.
Paul: We've all lived in the actual city for the last five years.
$: What suburbs are you from?
Paul: We grew up in a town on the south shore called Hingham.
$: What led to the Darkbuster song "I Hate the Unseen"?
Paul: We wrote that song.
Mark: We get royalties for it every time they play it on the radio. Actually, we're lying. I don't know what prompted it. Apparently it's just a joke and they don't have a problem with us. But it still kind of irks me.
$: What prompted it?
Mark: At the time we were one of the popular bands in Boston and I guess they decided to single us out. And it worked. I think all their other songs suck, except for that one.
Paul: I think they needed a hit. And it worked for them. It got them a lot of attention at first. They did a lot of shows. And they won this contest put on by a local radio station called the Royal Rumble.
$: Like a battle of the bands?
Paul: Yeah. And they won. And they got all these great things and all this shit, like they played at Foxboro Stadium.
Mark: Where the Patriots play.
Paul: They were all the rage for like ten minutes and were on the cover of all these magazines. And now they're putting out a CD on the label we put our first 7" on. Sorry guys. You got used.
$: Are there any drawbacks to being a Boston band, like with getting exposure on the West Coast?
Mark: Not really. In other countries we're always being compared to other Boston bands like Gang Green, Slapshot, SSD, The Freeze.
Paul: People have this idea that if you go to a bar in Boston you'll find us hanging out with the Mighty Mighty Bosstones, Aerosmith, The New Kids, The Dropkick Murphys. 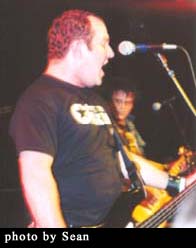 $: In its own way Boston is just as spread out as L.A.
Mark: Exactly, that would be like me coming out here and trying to put F- in the same category as the Germs and No Doubt. People try to throw you in all these categories.
$: Do you guys play any Freeze covers? I seldom hear people talk about the Freeze out here.
Mark: The Freeze are definitely one of the most underrated American punk bands. We were going to put a Freeze song on the last album, but we never learned it [They covered Michael Jackson's "Beat It" instead].
$: What song?
Paul: "Talking Bombs" on Misery Loves Company.
$: Is this a great time to be a politically motivated band or what?
Mark: It's always a great time to be a politically motivated band. This country has always been run by shitheads.
Paul: I think punk rock should be motivated. It should stand for something and it should say something. It should be something that makes you want to get up off your ass regardless if it's political or not.
$: Do you see a song as a vehicle for a message or is a song just a song?
Paul: A song is just a song.
Mark: When I write something I think there should be some sort of a message, otherwise there's no point. This is just my opinion but I don't think there's any point to writing a song about a fucking car, or a pretty girl or something stupid like that. I think it should be about something that pisses you off. Something that's going on in your community or in your world.
$: Does that ideology carry over to your decisions for what songs you cover in your bonus tracks?
Mark: Obviously not.
Paul: As much as we get into political issues and stuff like that we can still joke around and laugh at ourselves. Punk rock is not going to change the world or overthrow the government. It's meaningful and should have meaning, but…
Mark: You can't take yourselves too seriously.
Paul: Exactly.
Mark: The records are serious. The message is serious. But we also like to have a good time. If you hang out with us we're not going to be sitting around talking about how much the police state sucks or welfare rates are down or up all day. So at the end why not have a joke of a song? Sadly enough those are the songs everyone wants to hear. "Beat it!" "Every Rose!" And we're like, "Dude, no! It's a joke!"
$: What happened to your first singer?
Paul: He went to college. He's trying to become a professional hockey player. He went to college in Chicago, I think.
Mark: He's doing really good. I just talked to him on e-mail. He was really only in the band for four months. He wrote a bunch of songs, we recorded them, and he was out of the band before the 7" came out.
$: What brought you to The Unseen, Paul?
Paul: Trip wanted me fill in while this kid was away because he knew I could play guitar. And it ended up working.
$: Have you reconsidered your anti-boat songwriting policy?
Mark: Definitely still hate boats.
Paul: No boats. No way.
$: What are your day jobs?
Paul: I work at a liquor store.
Mark: Landscaping and I run a record label.
Paul: I don't know if I still have a job.
Mark: We've been gone so long we may not have jobs anymore but those are the jobs we had before we left. 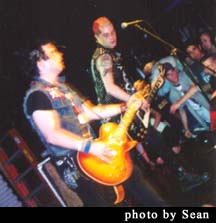 $: Have you ever been to Africa?
Mark: No.
$: One last question.
Paul: Is it about a boat?
$: No. It's about a stinger missile.
Mark: Do I have a stinger missile?
$: You already have one. You're aiming it and you're so totally going to get away with it. What do you point it at?
Mark: I'm going to point it at Darkbuster's van. They want us to die in a car accident? I want them to die in an explosion from my missile.