When a friend asked if I were interested in going to see The Slits, I was taken aback. I hadn’t heard one word about a Slits’ reunion tour. I immediately assumed that perhaps only singer Ari Up would be involved since I was unaware of any recent musical activities from the other ex-members unless you count their ex-drummer Palmolive, now an avowed Christian, who still plays drums but only in her church band. I did my internet research and found that original bassist Tessa Politt would also be on this tour. Once I discovered they were playing Columbia, South Carolina (just under one hundred miles from where I live), I was convinced to check out this reunion tour; something I am normally skeptical about. 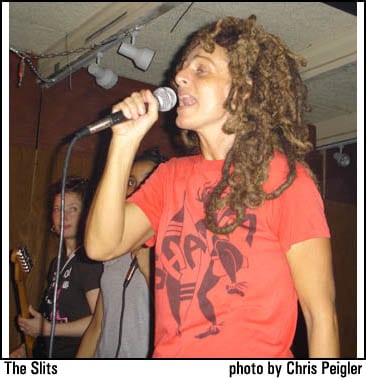 What was all the more surprising and encouraging is that once we arrived in Columbia at the show space, The Art Garage (http://www.theartgaragesc.com/) which I had not previously heard of, I could plainly see it was a bonafide DIY venue! I walked in to the room where the bands would be playing and thought, “I can’t believe that I’m going to see The Slits here!” The vast majority of old punk bands on the reunion circuit aren’t playing places like this. The ticket price was $12 a head, which seemed reasonable to me, and I would say that there were around one hundred people at this show, which filled up the place nicely.
The first act was The Dubber, a local guy playing reggae on his acoustic guitar. He was solid and held most of the crowd’s attention. The second act was The Apes, a DC band who are on tour with The Slits. I was at such a loss for words as to describing their music that I went to their website (http://www.theapes.com/) for help and I can see that other reviewers have had the same trouble that I’m having. This is not an insult. The Apes were fantastic live. They just don’t fit into any single genre description. Most of the reviews I read commented on their “Deep Purple organ playing” but the one quote that I thought fit best stated that the band would be “stoner metal” if they weren’t so “vivacious.” The one band member who puts them so completely over the top live is drummer Jeff Schmid, who plays with such primal ferocity that I wasn’t reminded of any human drummer I’ve ever seen, but he did make me think of Animal from The Muppets. I don’t know how well I would like their music if I were listening to it on CD or record, but I unquestionably recommend their live show. 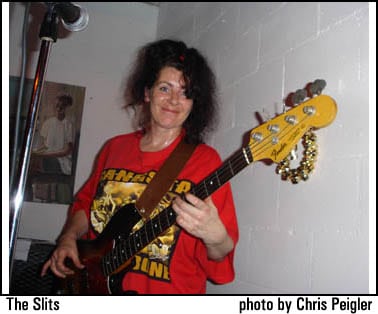 After The Apes had floored me with their intense, primal performance, I couldn’t help but wonder what The Slits would follow that up with. What they chose to do amounted to, in my eyes and ears, a party at The Slits’ house! Instead of playing a song followed by another song, followed by a few attempts to acknowledge the audience, followed by yet more songs, The Slits’ approach was more akin to their having you over to their practice space for a big party during which they happened to be playing songs in between the jokes and chatter. Since the jokes and chatter were top shelf to me (and I think most of the audience agreed), this was an excellent approach. They didn’t scrimp on the music either. They had been playing for at least an hour when the cops arrived (for the second time that night, due to a noise complaint) and the show was finally shut down at around 1:45 AM.
As for the non-original members of The Slits on stage that night, there were four of them! Three of them looked very young and I’m not sure that two of those were even out of their teens! From the Slits website (http://www.theslits.co.uk/) I managed to find out this much: a guitarist who apparently goes by the name “No,” Anna Schulte on drums, Adele also on guitar, and Holly Cook (the daughter of Sex Pistols’ drummer Paul Cook) on backing vocals, although Holly stood right beside Ari, and was more like a second front person to me. 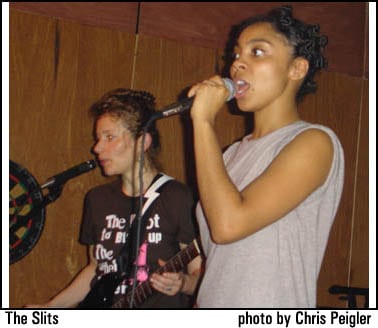 The joking around began while the band was setting up. Ari found a large disco ball in the show space and sat on it on the stage for a while. Finally, Chris Bickel (ex-Guyana Punchline, In/humanity, Antischism) showed Ari that there was a hook for mounting the ball from the ceiling which he proceeded to do. Shortly afterwards, Ari took it down as their guitarist No kept bumping her head on it. They opened with the first single of theirs I ever bought, “Man Next Door.” I thought that the standout Slits player of the night was Tessa. Her stalwart, fluid bass lines drove their music as surely as Jeff Schmid had propelled The Apes. Most of the songs they performed that night came from their Cut album, although they even did one song from Return of the Giant Slits. I hadn’t listened to their music in years, but I think it has held up surprisingly well. They have a new three-song EP out called Revenge of the Killer Slits which they played from as well. I also have read that Mick Jones’ daughter, Lauren, played on The Slits new EP. I didn’t expect to hear anything at this show from their Peel Sessions release which documented their pre-reggae, more punk beginnings, but, surprisingly, they did play one song from that era. Ari made the comment that during the 1977 punk era, while others were sniffing glue or getting wasted, The Slits were having a revolution. She referred to their modern day incarnation as a “continuation” of The Slits. As their performance stretched past the forty-five minute mark I started to think that any minute they would announce that it was their last song, but until the cops arrived they just kept going. They truly did seem to be having fun as opposed to just going through the motions the way that I perceive lots of reformed punk bands to be doing. 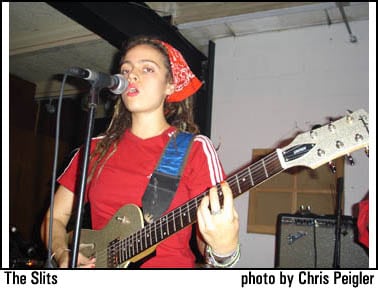 They will be touring the U.S. though Nov. 26. If they play near you, don’t miss them.