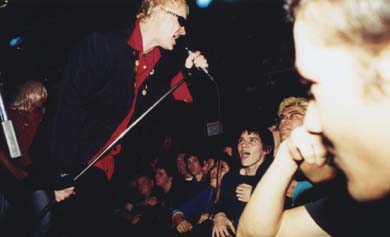 It's a well known fact that most "veteran punk bands" suck donkey wiener. Bands like the Sex Pistols, Vice Squad, X, and, most recently, Black Flag reunite with exactly none of the fire and brimstone of the early days and use the opportunity to pose and wank and cash an easy paycheck. Bands like the Buzzcocks reunite to sell ugly cars to dumb yuppies. On the opposite end of that spectrum, there's bands like the Skulls, who let their tight, lean music speak for itself without having to resort to saying, "Dude, we invented this, so send us money," and without having to use their guitars to cover up their sagging guts.

Introduction by Not Josh
Interview and pictures by Todd Taylor

Todd: Here's a hypothetical question.
James: Does that mean we're pathetic?
Todd: Hypothetical. What do the Skulls have in common with Michael Jackson?
Sean: I know something. Me and him were born on the same day.
James: And they're both gay.
Sean: Me and James are an item. It was me and Kevin for awhile, but now I've got hope and we're going to see the Locust tomorrow night in Tijuana.
James: I've got an answer. Michael Jackson and the Skulls are both great dancers.
Kevin: I slept at The Ranch when I was thirteen.
Todd: Actually, the question wasn't purely hypothetical. Who's the Milkman?
James: He's my dad. [laughs]
Billy: He's this eight-year-old. Skateboard kid. He came to one of our shows.
James: Came.
Billy: We do a lot of stuff with Team Goon and he skates for Team Goon and he came to our show and got on stage with us and he likes us and we like him and they're cool people and they've helped us out.
Sean: We did the Milkman's eighth birthday party.
Todd: That's the connection I was going for: grown men throwing birthday parties for kids they don't really know.
Sean: Well, you know, his mom and his dad were there and they approved. Nothing behind the curtain went on. It was cool. His dad even emptied the pool, all the water, and the whole team came and skated around us. It was bitchin'. 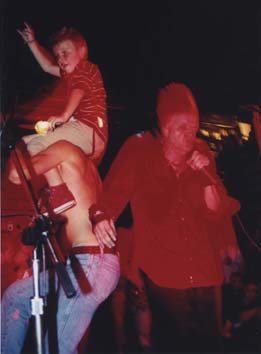 Billy: He got the name Milkman because he milks his rides. The older cats, they're always having to wait in line while he does his thing.
Todd: When is the last time someone has jumped over you?
James: What are you talking about now?
Sean: Sex? Jumped all over me?
Kevin: Remember when that dude ollied over us?
Sean: Michael Gage from Indiana.
Billy: At the Depot.
Todd: Explain that a little bit.
Kevin: We all laid down and he ollied over all of us.
Todd: Why?
Kevin: Just for the fuck of it.
Billy: I made sure I was in the middle, though, not on the end.
James: Just because he thought it'd be a good photo. He just asked us to do it. We're like, "Kid, you go on the end."
Todd: James, what were the last two incidents that were the impetus for you to stop drinking?
James: Okay, the second from last that made me think about it was when I woke up in a pool of my own piss in a cell in England and was shown the police report of my interview that I'd had the night before that I had no recollection of. And the last one was doing one of them - can't remember if it's a half gallon or a gallon - but one of those Jack Daniel's bottles with a handle on it. It was me and two other guys - Bob Nalbandian and Pat McGeehan, who was some heavy metal musician in the '80s. We got fucked up beyond all recognition. At two in the morning, my wife comes out of the bedroom to complain, and she sees me standing there with my pants around my ankles and my dick in my hand and Pat McGeehan with his pants around his ankles, bending over. And my mate, Bob, sitting on the sofa, going, "Woaahh!" She took one look and turned around and said, "I don't even want to fuckin' know." When, in reality, he said he had the smallest prick around. I said, "No, you haven't." He goes, "Yes, I have. I'm Mr. Small Prick, USA." I go, "Please to meet you. I'm England." And I showed him my dick and he realized it was smaller than his, so he turned around and mooned me. That's what really happened but my wife thought something else had happened.
Todd: Sean?
Sean: I woke up out of a blackout in the middle of almost having sex with my best friend's ex-girlfriend, who was not attractive. He was my best friend and that was a drag. I woke up and went, "Woah, what am I doing?" I'm thinking, fuck, this isn't right. I gotta chill. Earlier that night, I'd jumped off a roof into a pool with no clothes on.
Todd: Was the pool filled?
Sean: Yeah. That was fun and I remember that. 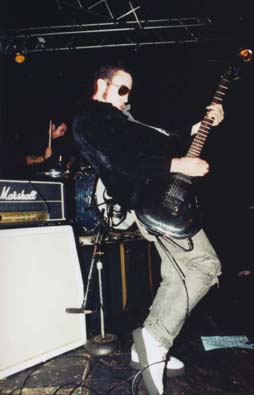 Todd: So, James, when you played keyboard for the Adicts, did you ever play one of Tony Hawk's private parties?
James: No. The Tony Hawk party was just recently. I was there because we lent them our gear. We're just old friends from years and years ago.
Sean: Who was that guy beating the shit out of my drums?
James: Tom Green. I was trying to rescue those drums from that mad man.
Todd: Who's that?
Sean: The comedian guy. They were giving out awards and everything was mic'd on my drums and he started beating them, going "Aaaahhhh."
Todd: Billy, how many knives did you sell during the summer of 1978? You worked in an army surplus store in L.A.
Billy: Lots of knives. Lots of guns. Because of the Hillside Strangler.
James: You do know that Sean just wrote a song called "Summer of Hate"? We're going to play it tonight.
Sean: It's about the death of one of the Hillside Stranglers and we celebrate his death because a dear friend of Billy Bones was killed back then, so we thought it was pretty good.
Todd: Billy, is it true that you found the Kid when you were picking up your daughter at school?
James: He was picking up little boys on Hollywood Boulevard. [laughter]
Billy: Actually, his sister and my daughter are best friends and she had told him about me, and he knew more about that time (the late '70s LA punk rock scene) than I knew and we got together. Actually, he had a band and they asked to do one of the Skulls songs. I went down to see them do it and he asked me to do the song with them and we did it and from then on, for a couple weeks, he kept calling. "We've got to do something. We've got to do something." We got together and it worked out.
Todd: Billy, is it true that you were in a band with ten black guys and you had an organ that played lights?
Billy: Actually, when I was thirteen years old, I got to be an emcee for an all-black band called Natural Black and I was Little Stevie, the White Wonder. I'd made an organ with lights on it.
Todd: What type of lights? Flash lights?
Billy: No. Like, floodlights.
James: He wrapped Christmas lights around his organ.
Billy: No, you'd hit a certain key and a certain light would come on. I was the emcee and traveled all up and down the east coast and I toured with Isaac Hayes. On the eastern seaboard, they were a big name band. In fact, some of them went on to do some big name stuff. It was my introduction to music, really.
Todd: What's the connection between the Skulls and skateboarding? You guys seem enmeshed in it. Didn't someone make a prototype Skulls deck?
James: We've had a couple of unique boards put together, just one-offs that Brad of Team Goon was kind enough to put together. Personally, it's a completely new arena for me. I didn't know fuckall about skateboarding 'til I was introduced to it though these guys. For me, it's a whole new thing. What's cool for me is that everyone who I've met through the skate scene is the fucking coolest. No baggage attached. Just people about skating, having a good time.
Sean: Another connection we have with skating, just with old school punk rock, high-energy music, and that's what we deliver. I guess a lot of kids are starting to catch on to the Skulls and skate to it, and are digging it.
Todd: When was the last time you saw somebody who was playing their instrument and had it physically break in their hands?
James: I lost an Ibanez a couple weeks ago. I call it my "bouncer." It's one I keep that I bring on now and again and bounce it across the stage and I threw it into the crowd. I have a way of throwing it, where I know it's going to be okay. And when I let go of it, I suddenly realized it was upside down as it left my hands, so I just had to watch it sail, hit the floor, and just break in two. There was nothing I could do, so I just had to enjoy it. I jumped off the stage and had a game of soccer with it with the rest of the crowd. It was kinda fun.