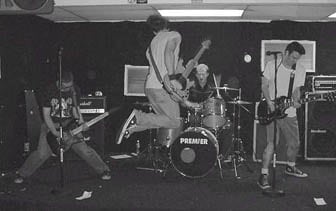 The Scaries: "I did not answer this question well." By Chris

The Scaries are a Chapel Hill band who have been around since 1997, although I did not get to hear them until 2002 when I saw them do two really rocking live shows. They have a new CD, Souvenir, out on Law of Inertia Records (www.lawofinertia.com) that should help to raise their national (and international, as they've toured Japan) profile. As I listened to their new album, I searched through my archive of old mags. I remembered something about these guys being compared to The Descendents, and I wasn't hearing a lot of Milo and company in their latest music. In Flipside #117 (March/Apr 1999) I found a review of their first album, Over You, written by Jessica (not to be confused with Razorcake's current Jessica Disobedience), in which she wrote, "melodic and Descendents-y in all the right ways, this album is aptly named. All the songs are about that first, second or third love that gets away or other personal relationship milestones." I never got to hear that album, though I would like to. I got into punk before Milo even started applying to college. Although I try hard to be open-minded about newer bands, I'm sure that I have a bias toward those new ones who draw heavily from bands I was into twenty-odd years ago. On the Law of Inertia website there is a review posted from Ink 19 that says fans of The Get Up Kids, early Promise Ring, and New Found Glory should find a lot to like in The Scaries. Since I'm not very familiar with those bands, I imagine that what I hear in the Scaries' latest music that doesn't remind me of The Descendents probably sounds more like the newer crop to those who are acquainted with it. Last year, at the Warped Tour, I met a group of teenage boys (Hi Phillip!) on a serious mission to meet New Found Glory. I realize there is a new generation of kids who relate to songs that I've never heard the same way I related to "Silly Girl" and "Myage" many years ago. What follows below is the old dude asking the younger band some questions about their own serious (and sometimes not-so-serious) mission. 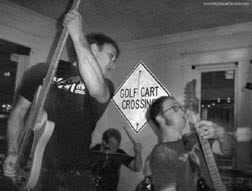 Chris: Are the Scaries a career-oriented band, or do you take things one step at a time?

Mike: To me, being "career oriented" has really negative connotations, in regards to music. Bands that start with the sole purpose of getting signed to some major label and being rich and famous or whatever. That kind of shit bums me out. The way I look at it, we're definitely not career oriented. We play music because we love it. We're really good friends and we have a good time driving around the country, playing rock, and acting like idiots. Yes, recognition is nice, and we certainly wouldn't shy away from it, but it's not our goal.

Matt: "Career-oriented" sounds contrived, like you're calculating your appeal and writing songs with a formula and an agenda.

Chris: What artists or bands inspired you to want to play in a band and why?

Mike: As funny as it is, Metallica probably inspired me to start playing music. I heard Master of Puppets for the first time in sixth grade and was blown away. I didn't actually pick up an instrument until ninth grade, though. So, it took awhile, but I think Metallica was the initial thing that got me so interested in music. When I finally started playing, I was super-into the Descendents/All and the Cure, who wrote songs that were a lot more personal than most stuff I listened to. They're really the bands that got me interested in writing songs. They're still two of my favorite bands.

Matt: I was in my room my freshman year of high school and heard U2's "Red Hill Mining Town" and was like, "This would be awesome to play live in front of people." It was seeing Superchunk in '93 or Guided by Voices in '95 where I was like, "Hell yes! The rock!" 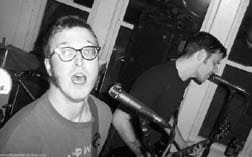 Chris: The best bands always give back to, or have a special rapport with, their audiences and therefore transcend mere entertainment. What do you feel The Scaries have to offer their audience in this regard?

Bill: I'll bet we can act more stupid than most people you know. We are not very serious people. We have a good time whenever possible. People either love us or fear us.

Matt: Sometimes we get naked and we invite the audience to as well. You'd be surprised how often they go along with it. Other than that, we hand out more hugs than high-fives.

Chris: Do you consider The Scaries a punk band, or do you feel that the term is too limiting or too easily misunderstood in today's underground scene?

Bill: I always wanted to be in a punk rock band, and I guess you could say we are, but it's really not that simple. Describing music without just playing it is pretty difficult, so labels are necessary, but very annoying. I did not answer this question well.

Mike: My definition of punk rock is probably a lot different than most people. So, to me, The Scaries are a punk rock band. With the way most people think of it, I think The Scaries are more of a pop band, with punk tendencies. We definitely fit within the boundaries of punk rock, as defined by the masses. I can't say I'd want to be labeled a punk band, because that immediately limits our potential to grow in different directions, if we choose to do so.

Chris: On the Law of Inertia site it mentions that you are a new father. Assuming this is your first child, has becoming a parent cut into the time you spend with The Scaries?

Bill: Mike's son is my girlfriend, so that makes things easier.

Mike: Yes, it's true. I have a ten-month old, bouncing baby boy, named Ash, who is apparently huge for his age and will no doubt kick my ass when he's a teenager. He is my first, and last, child. Having a child is, as weird as it feels to say, one of the most amazing thing I've ever done. I never really thought I'd be a dad. Luckily, his existence has not affected the amount of time I spend with The Scaries. It just takes more planning and saving money, but it's totally do-able and has yet to be a problem.

Chris: Name some of the bands from your area that you feel more people should know about.

Mike: Definitely Gunmoll, on No Idea records. They're not from our area, but they're some of our best friends, and they fucking rock. Also, Alli with an i, who recently signed with Law of Inertia records. Really good, old friends of ours who will be blowing up huge, I'm sure.

Chris: How did you guys hook up with Law of Inertia?

Bill: Ross wanted to date me.

Matt: Ross was a long time fan from when he reviewed our last record, Wishing One Last Time, for his famous zine. When it came time to release this one, we gave him a call and that was it.

Chris: Before you sent me your new CD, the only recorded Scaries music I had was a song called "Mary Drips" on a comp CD called Dare to Be Square. Unless this was a different Scaries, you guys had a different sound then - the singer definitely sounds like someone else. I was wondering if The Scaries have evolved over time and now have a uniquely different sound than the one you may had earlier. If so, what do you think contributed to this evolution?

Mike: Yeah, that's probably The Scaries, from Pensacola. We found out about them about a year after we started the band. Funny thing - one time we played in Pensacola, and the girl who booked at the club, Terry (from This Bike Is a Pipebomb), thought it would be funny to have those guys play the show with us. We thought it was real funny, but the other Scaries didn't at all. In fact, I don't think they thought anything was funny. They were too busy trying to be evil or something. They weren't very nice, or very good. Anyway, The Scaries have evolved over time, but not drastically. We pretty much still do the same sort of thing we started with, just much better.

Chris: If there is anything else you'd like to talk about, go for it.

Matt: Our song "Awake"(an acoustic song) is posted all over the internet as a Dashboard Confessional song - lyrics and mp3's. I don't know if we should cash in on this marketing opportunity, or be seriously offended.

Mike: I'm seriously offended. Either that or an emochristiansuperstar...you choose.