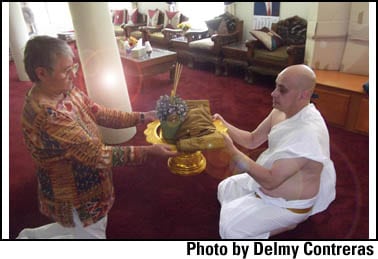 “I’m pregnant.” Her words hit me like a hammer to the heart. My former fiancé had returned to seek assistance with an unrelated issue, but at the same time, she unexpectedly dropped the pregnancy bomb right in my lap. I was repelled. When she spoke those words, I was sitting in a wheeled office chair and I reflexively pushed myself backward, rolling across the room as if a sudden, unseen force had thrown me in the opposite direction. I felt sick, angry, disgusted, and sad. It was bad enough to learn that the woman I still loved was going to be the mother of another man’s child, but to know the one who impregnated her is a person who is already married, chronically unemployed, and functions intellectually at the mid-elementary school level…it was absolutely tragic. I was devastated all over again, and I did not want to fall apart like I did before.

I ran to the Buddhist temple for refuge, and was ordained as a Samanera (novice/temporary) Buddhist monk again. I just couldn’t take it anymore. I had to restart my life. I had to get away from the mundane world long enough to acclimate to the unchangeable news and to regain some composure in order to keep on living and hopefullyattain some peace of mind. Phra Ajaan Samreuy Tayano, one of the living Buddhas, predicted all this several months before. I kept hoping he would be wrong this time, but his prophesy was correct, as usual.

The day before the ordination, my former fiancé and I spent one last day together. No arguments. Apologies from both sides were given and accepted. We both wanted to go our separate ways with an amicable parting. I still have some lingering anger and resentment, and I will never be happy about what has happened, but at least we said goodbye in a peaceful fashion. I know that a baby is innocent, blameless, and beautiful, but I also know that her child’s face will be a melding of hers and of the other man…and that is something I never want to see. Never; not in a thousand years. I wish her all the best and I hope the child grows up healthy and happy, but…

…I honestly do not think I can look into her face ever again. The past is dead. Let it be buried and may something wonderful grow from the decay. That is why the lotus flower is one of the primary symbols of Buddhism; a perfect flower can grow from the most fetid water and soil.

In order to become a Buddhist monk or nun, tradition dictates that one’s immediate family gives the one to be ordained to the temple as part of the formal ceremony. My mother and my former fiancé went with me and gave me away to the temple. It was a reverse marriage. The Samanera monk ordination also served to function as a divorce ceremony. In the picture above, my mother and my former fiancé are offering to me a golden platter which holds flowers, incense, and the monk’s robe. The girl’s image has been Photoshopped out and replaced with a bubble of light. This was not done as an insult, rather, it was done to symbolize how the past is gone…how everyone in this world is like a bubble. We come into being, we float around for a while and then, “pop!” we are gone. Nothing is permanent. This is the world of Samsara: Illusion, craving, and wandering.

But I was a lousy monk. I was still sad, physically and emotionally spent, and could not sleep at night. My robe was never tied correctly, and I kept violating cultural and monastic norms without realizing it. I was supposed to be practicing nonattachment and focusing on meditation, but I was still too attached to the world. I took a Razorcake Magazine with me and I read that at night. I mentally sang punk rock songs to myself and I hid among the lush foliage of the gardens at the rear of the temple property while occasionally sneaking over to the temple computer to check my social network page, and to read this or that on the internet. Basically, I had already got what I wanted. I wanted a “divorce,” to give and receive apologies, and to be left alone. I walked around in a trance. I felt a hundred years old. I felt a thousand years old. I felt like the walking dead. I was spiritually dead.

I passed by a dark window and saw my reflection. I was aghast! I saw a bent old man with dark circles under his eyes, slouching posture, and a very sad expression on his face. I stood there, open-mouth stunned by the image that could not possibly be mine…but it was. No more, no more…I made up my mind I was not going to feel and look that way anymore. It was time to rise from my own carcass.

Two days later, while we monks were being fed by the temple devotees, I simply wasn’t hungry. My robe was never tied properly, so it kept falling down from my shoulders. My knees screamed with pain from years of skateboarding injuries and I knocked over my water bottle with my foot. The temple devotees were offended because I did not eat much and they regarded that as a refusal of offerings. I explained that I simply wasn’t hungry, and a young monk, only fifteen years old, came over to chide me.

“If you do not eat, it means you are sick and must stay in your room.” He said. “And another thing…” but I cut him off.

“Everybody listen!” The roomful of monks and temple members stopped and turned their attention to me. “I came here for peace of mind. I did not come here to learn how to fold cloth, to learn table manners, and I certainly did not come here to have a kid tell me to sit in the corner like I am a punished child. I want to be left alone…please just leave me alone.” I held back the tears as I quietly left the room. Then, I grabbed my monk’s bag and walked out the temple gates into the hot, dusty, outside world of Ontario, California. I felt some trepidation (how will people react to me?) but I also felt free. I felt alive and eager to see what the outside world had in store.

With no destination in mind, I walked through Ontario in the midday heat and smog of summer. I could feel many eyes on me. It must have been a strange sight; a Buddhist monk briskly walking through downtown Ontario, but I paid the gawkers no mind. I was on a mission. Even the street name was Mission Boulevard. I walked eight miles without stopping. The sun burnt the skin on my shoulders and neck. My feet blistered and started to bleed. I felt like a ghost and the world was real. I felt like I was real and the world was a ghost. A trance developed and the world became brighter, more real, but ironically more illusory. It was kind of like being on acid, but without all the hallucinations and involuntary laughter. Then I realized, “I am awake! I am awake for the first time in a year!” I had not slept well in a year, so I was never completely rested, but on that day…the pain, heat, and adrenaline woke me up. It actually felt good to be alive for a change.

Trudging onward, I realized I was headed toward my tutoring center business. It was like a magnet; a tractor beam. Eight miles later, I walked into the learning center and smiled at the surprised reactions from my friends who were minding the place while I was away. Then, it became apparent why I came back, not just because the tutoring center is my comfort zone, but the teacher who was covering my shifts was too sick to teach. I had to take over. The rest of the day was spent teaching various students while still wearing the monk’s robe. Everyone got a kick out of it, and I had another realization.