Everything at this show was virtually as good as it could possibly get. All the bands on the bill put on eye-widening, jaw-dropping, stellar performances. The Five Star Bar in downtown Los Angeles hosted the Symbol Six record release party for Dirtyland, the band’s second full-length LP that took a mere thirty-two years to materialize. Only two things could have been better: Symbol Six was mysteriously missing guitarist Taz Rudd and the fetid smell from the bathroom tended to waft into the stage area. Even so, Symbol Six rhythm guitarist Tony Fate stepped up to expertly take the lead guitarist role, while the distinct scent of old piss and floral urine cakes added to the punk rock underground ambience. This was Symbol Six’s night, but out of respect to punk rock royalty, the band put Rikk Agnew and his latest crew in the headlining position. This was an invitation-only event, so promoter Ginger Kuroishi made sure everyone in attendance got a laminated Symbol Six Record Release Party VIP pass—nice souvenir. 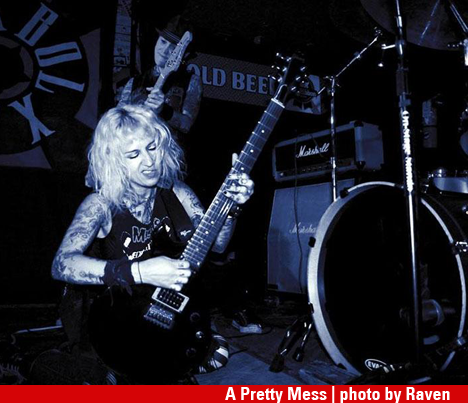 A Pretty Mess was onstage when I entered the room and my immediate reaction was, “Holy shit! I’d heard this group was intense, but I had no idea.” This female-fronted four-piece from L.A. has more balls than a bowling alley. The energy and intensity drew me to the front like a moth to a flame and I realized I discovered another gem that had been hiding in plain sight for way too long. The music was angry, the vocals sneering, and it all cut deep down to the old school, streetpunk roots.

Lead guitarist and vocalist Dee Skusting was a powerhouse of power chords and simple, but effective, leads. Watching bassist Meghan Maltox was a show in itself with the way she dominated her instrument as she slapped it around and forcefully used her hands to make it do exactly as she demanded. A Pretty Mess is adroitly keeping the flame of honest, stripped-down punk rock alive. The band was joined by Rikk Agnew for the cover of DI’s “Guns,” and I wondered if the show could keep this level of intensity going until the end. Listen for yourself here. 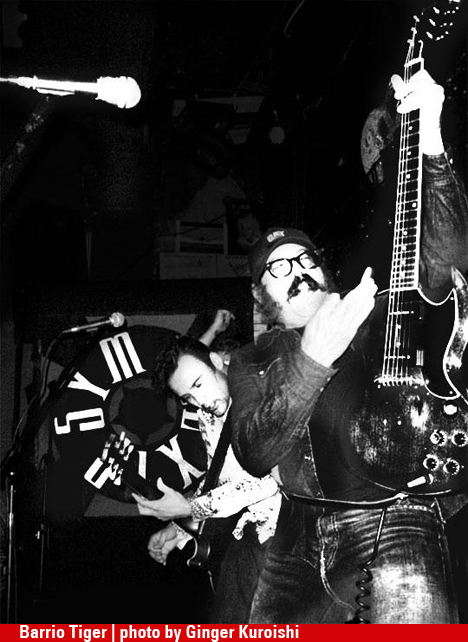 Barrio Tiger, another hometown L.A. band, answered my pondering with a resounding, hard rock “YES!” These four guys played some real ass-kicking, blue-flavored, garage style, rock‘n’roll with such intensity, it was no wonder they were on the primarily punk rock bill. Barrio Tiger shreds and swaggers in a high-energy, upbeat way that is both familiar and unique at the same time—familiar-sounding with the well-worn, blues-based leads and chord progressions, and unique in the way guitarist Jimmy James (Hangmen, Comatones) looks and quirkily laid it all down. With his super-thick glasses, bushy moustache, and all denim wardrobe, he looked like a fictional character that could have been played by actor (and former professional skateboarder) Jason Lee. I really liked “Special Purpose,” which was very similar to AC/DC’s “Whole Lotta Rosie,” with its stop/start intro—it was a real pounding head-nodder that made me want to dance, even though I never dance. Most excellent was the band’s super-charged rendition of Devo’s “Gates of Steel.” I doubt that Devo could have beefed up and fuzzed-out that song more. Thank you to founder, vocalist, and guitarist Calixito Hernandez for creating and turning loose the Barrio Tiger. Barrio Tiger can be found on Facebook.

Technically, the stars of the evening—the members of Symbol Six—displayed great respect to Mr. Rikk Agnew and deferred to his band by choosing to play second to last. That was a bit of real class. As usual, Symbol Six put on one hell of a show, even though lead guitarist Taz Rudd was on temporary hiatus. While his absence did diminish the fullness of the band’s sound to a certain extent, the forcefulness and fine-tuned velocity that defines Symbol Six remained intact.

Celebrating the (very) long-awaited release of the band’s second full-length LP Dirtyland, frontman Eric Leach led his band into a full frontal charge of songs both new and old. First off the block was “Spit It Out,” and that is exactly what went on for the rest of the set. It was high-energy, buzz-filled intensity from first song to the last. Soon after came the new song, “Fired Up.” I like this song so much that I have been singing it to myself throughout the day for weeks. “Fired up / Jump right in / What if you lose / But what if you win?” I love it.

After a few more shredders, during the proud loser’s anthem, “Never Gonna Make It,” some drunken goof stumbled across the stage plowed directly into my friend Cathy, who is a rather large woman, and knocked her backward onto her behind right in front of the stage. As the band played on watching, Cathy proceeded to slap the shit out the drunken buffoon with dozens of blows as the poor sap tried desperately to climb out of her ample lap. Those of us in front cheered her on and some were taking pictures. When the song concluded, Mr. Leach asked the audience, “Did you all get that?” Thankfully, nobody was hurt. After a few more songs, both new and old, the set concluded with the new album’s namesake, “Dirtyland,” and noisy approval from everyone in attendance. Every song on the new record is a winner, so be sure to pick that up and to visit Symbol Six here. 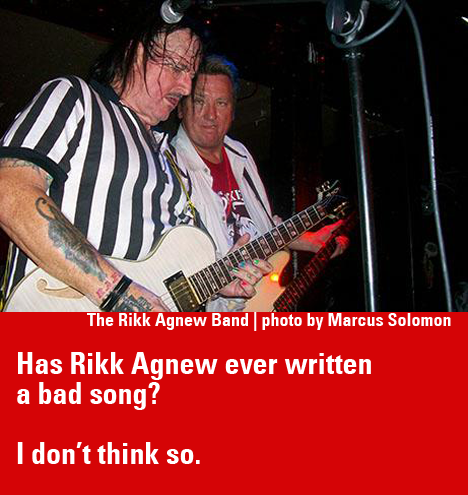 I was looking forward to hearing Rikk Agnew’s latest creation, and I honestly got blown away. As the band was setting up, it was obvious that what was coming our way was going to be good. Starting out with “OC Life,” and soon followed by the classic Adolescents’ ripper “No Way,” I completely lost myself in the music. Some of you know what I am talking about. The music is so enjoyable and overwhelming, that there is no vision, no memory, no cognitive constructs other than sound and elated sensation.

Someone was slapping me on the back and urging me on. I turned to see it was Dee Skusting, the singer of A Pretty Mess, smiling broadly and giving me the thumbs up. Through a blur, I murmured, “I’m not here right now,” even though I knew she could not hear me and then turned back to find that place for a few more precious moments. We were also treated to “Death Wish,” an old Christian Death tune, and some of Rikk’s new songs, such as “I Can’t Change the World” and “One Shot.” I sang along to “Creatures” so loudly, I was hoarse for two days. Has Rikk Agnew ever written a bad song? I don’t think so. Without exaggeration, I can honestly say, this show was truly as good as a gig can possibly be and it was brought into existence by the hard-working, relentless, Ms. Ginger Kuroishi. Take some time and click here to experience The Rikk Agnew Band.