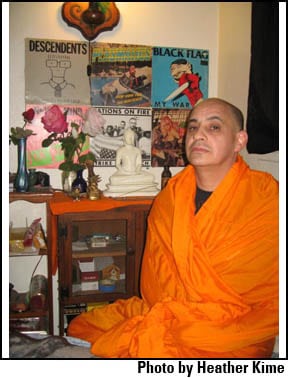 The Resurrection of Mangala: Punklightenment, December 2009

I was dying. I was meditating and praying for death and it was happening. When the jewel of my life, my fiancée, left me, I was so devastated that I wanted to die. She was the center of my world, and I loved her as much as a human can possibly love another…perhaps even more. “Die! Die! Die! I want to die!” I silently repeated to myself over and over again. I had already cried so much that no tears were left…and I kept on crying. I screamed until nothing came out…and I kept on screaming. Nightmarish visions of my beloved in the arms of another tormented me day and night. For fifty-seven days straight, I cried every morning and every night. It was all I could do to get through the days, and the nights were even worse. Writhing in agony, I would cringe, cry, scream, pray, and beg the empty room for redemption, forgiveness, and release. One night, I found my monk’s robe and it gave me comfort to cover myself with it. I found a saffron-orange security blanket, wrapped myself in it, and began to slowly, but steadily commit suicide with my mind. Every day and every night, I would make an abomination of the meditational techniques the monks had taught me. I had several nervous breakdowns, multiple panic attacks, and one minor heart attack. It was amazingly easy to do…I was ready to go. When my paternal grandmother died only a few days after my grandfather, I understood how love could be so strong that it could kill someone, but now I have felt it.

One night, my condition reached a critical point. I was physically exhausted from two months of sleeping anywhere from zero to four hours a night, and emotionally exhausted from the devastation of the break-up. Late one night, I collapsed at my tutoring center. Trembling, stumbling around, and uncontrollably sobbing, I felt the pain in my right arm. My legs went numb. A crushing pain in my chest made it almost impossible to breathe. I fell to the floor and I felt the rush of madness begin to take over my mind as my body rebelled against its own existence. Dillon, my very close and loyal friend, called his mother. “Mom! Marcus needs to go to the hospital!” Neffertari, Dillon’s mom, was immediately on her way. I grabbed the phone and called another good friend. “Mitch! I’m losing it! I’m dying! I need help right now!” He and another exceptional friend, Annette, were on their way. I staggered around. Somehow, I ended up in Dillon’s arms, sprawled out on my back as he held me like a scene from some tragic Renaissance painting. I looked up at his face. He looking down at me…crying. Everything seemed like a nightmarish dream. I was dying, but I was not so sure I still wanted to die. After all, I am still here and I called for help.

Suddenly, I realized I was sitting up and Dillon’s mom was talking to me. Mitch and Annette were there, too. It was like waking up from death right into another confusing dream where everybody was hugging me and telling me things. Neffetari told me that I had to accept things as they are and that is why I kept getting worse. She told me how the break-up of an intense and loving relationship often models the stages of death and dying. First, there is shock, then denial, followed by anger, bargaining, and finally, acceptance. Neff pointed out that I kept getting to the bargaining stage and then would begin the whole painful ordeal by going back to shock. It was true, and I felt the first hint of healing.

It was true. I couldn’t believe it happened. How could the most wonderful person I had ever met suddenly be gone? Even worse, it seemed to be all my fault. Of course, it takes two to argue, and on the night of the break-up, my beloved and I both behaved badly, but I really crossed the line. We both said mean things to each other, but what came out of my mouth was extremely vile. She had an unresolved concern in her mind that festered for years, and I had become complacent with a tendency for emotional tantrums. I apologized over and over again. I begged and pleaded for another chance. I promised to be a better person and not to give into angry emotion. All I ever wanted was for her to be happy. Just let me try again, let us try again…things will be different this time. But no….and I would reset and go right back to the shock stage all over again. Neff, Dillon, Mitch, and Annette all made me realize that I had to break that cycle if I was to live and remain sane.

I went to the Buddha. I know a monk who is considered a living Buddha…because he is. I told him about everything and he basically told me that I had forgotten the things I learned when I was a Samanera (novice) Buddhist monk. He told me that I had become mentally lazy and was no longer moving forward. He told me that my fiancée and I argued too much because of a lack of communication and that I needed to be alone for a while. He told me I needed to find strength from within and learn to be happy while being alone. He also told me that my love already had another boyfriend. “No! That can’t be!” I said to him. But I knew he was psychic, and told me things whether I wanted to hear them or not. “Yes,” he said, “She is with a small man….a very small man.” Little did I know then that The Buddha was speaking both literally and in the figurative sense.

It was horribly true. I soon learned that the love of my life had found another. He's a person whose flaws are legion, but suffice it to say that this guy is a dishonest, impatient, and forceful dimwit who finds amusement in the suffering of others. I was so upset that I pissed myself and had to vomit. The person who told me this terrible news took great pleasure in inflicting it. She came to my tutoring center office, told me about the other man, and smiled as I crumbled sobbing to the floor. I looked up at her and, through the tears, I could see the evil smirk on her face. Even then, I realized that people were being sorted out. My true friends and allies were coming to the rescue while the false ones—the users and deceivers—were being revealed and removed.

Soon after, I began receiving death threats over the phone while at the office. At home, somebody kept calling late at night and hanging up…dozens of times for weeks. Eggs were thrown at my office door. Recently, I was still being taunted and harassed via the internet with misspelled threats, childish jeering, and disturbing pictures. At first, all my defenses were down and I was virtually helpless. My small-minded tormentor and his cadre of selfish, sadistic friends took great pleasure in kicking me while I was down during their efforts to prevent any reconciliation between my former fiancée and me.

I had never been so sad and hopeless in all my life. My heart was broken, I was overwhelmed by remorse and the pain of loss while heartless jackals taunted, threatened, and laughed at my suffering. Then, I was rescued by an army of true friends and allies. So many people rushed to my assistance and quite literally saved my life. One, the brave Kenny Blue, in a chance encounter, came face-to-face with my little enemy and silently delivered the message to leave me alone.

The calls stopped. Kenny’s fiancée, Elizabeth, helped to save the tutoring center by learning how to handle most of the office management tasks and by becoming a tutor. Friends and former students called and stopped by on a daily basis to make sure I was all right. Bit by bit, the fog of sadness cleared and I realized that I had dozens of people who cared about me, who needed me, and were literally protecting me with their own bodies. As time passed, I began to realize more and more how lucky I was to have such an enormous social safety net, and I also realized that my work is important. I may not be a rich man, but I do make a positive difference in people’s lives. I no longer wanted to die, and even though I still miss the love of my life more than words can describe, my life has meaning, purpose, and hope. I learned to live again. I learned to laugh again. I learned to be me again. Someday, I might even learn to love again.

I went back to the BuddhistTemple in Los Angeles where I had been ordained as Bhante Mangala (Reverend Lucky). I had pretty much figured things out, but I needed to fill in some gaps and wanted some help in dealing with the loneliness. “Bhante, I am suffering,” I told the aging Sri Lankan monk as he sat in the altar room next to the large Buddha image sitting in serene contemplation. He shrugged slightly. “Life is suffering Mangala; you know that.” He sipped his tea. “The things she does cause me great pain,” I said. “No, Mangala, it is your attachment that causes you great pain. Every person has the right to be free, to learn things, to do what they want, to make mistakes, to make right decisions. Her Karma is her own. Your Karma is your own. There is a hook in your mouth, and you must remove it. Let her go. If she really loves you, she will return.” I didn’t want to let go, so I lay down in front of the altar and began to cry. A few other monks came into the room and quietly began to chant prayers. “Get up Mangala!” The elder monk said sternly, “It is time to get up now.” Suddenly, I felt warm and did not want to cry anymore. I stood up. “What is my name, Mangala?” asked my wise advisor. “Mangala.” I answered. His ordainment name was the same as mine. “Sri Mangala.” He corrected me. “Do you know what it means?” “It means ‘Lucky.’” I answered. “It means ‘Very Lucky’…we are the fortunate ones…do not forget who you are Bhante.” Bhante…he called me Bhante (reverend) I realized. “I see your belt” he said. I was wearing my gold monk’s belt on a daily basis in order to remind myself to control my emotions and to keep on trying. “Do not forget what you have learned.”

I had returned from the dead.