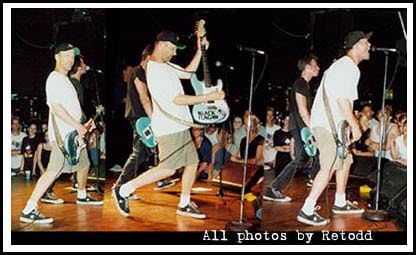 The Queers: Joe, His Hat, and His Twelfth-grade Education By Felizon

I had a huge crush on Joe Queer. I won't tell you how old I was, but I'd listen to The Queers' early Lookout! albums (Grow Up, Love Songs for the Retarded, Beat Off), and I liked to imagine that I was the girl in each pop-punk love song that Joe Queer wrote and sang. I liked to think that I was his Voodoo Doll, the Burger King Queen, Debra Jean. Fuck the world, he wanted to hang out with me tonight. I knew all the words to all his songs, and if you had told me then that someday I would be interviewing the man himself, I would have called you a noodlebrain. But it's true: I got the chance to meet up with Joe Queer and see my pop punk idol in person. And the most important thing to me was finding out as much as I could about the man behind the persona. Here's what I got. 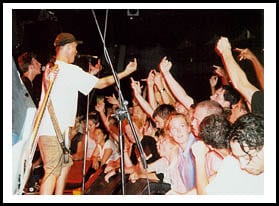 Felizon: For the record, what's the name on your birth certificate? Is your name really Joe King?
Joe Queer: Yeah.
Felizon: It is?
Joe Queer: Yeah, that's my name.
Felizon: Really? We thought it was a pun.
Joe Queer: No, that's my name.
Felizon: What's on your birth certificate?
Joe Queer: Joe King.
Felizon: Awww... there's no story behind that?
Joe Queer: No, no. One day I woke up and said, shit, I guess I'll have to be a punk rocker with a name like that. A lot of kids call me Joe Queer now.
Felizon: In your Fishing Diary, you talked about your Black Flag baseball cap and how you'll never take it off. Why won't you take it off?
Joe Queer: Because my hair is thinning.
Felizon: Your hat's sort of your trademark now.
Joe Queer: Yes, it is.
Felizon: Also, in your Fishing Diary, you referred to your parents as "two old crows," "a couple of old bags that should be thinking about the hereafter" - you remember writing this?
Joe Queer: Oh yeah, yeah.
Felizon: I figured you were kidding.
Joe Queer: Yeah, yeah.
Felizon: Don't you come from a family with eight kids?
Joe Queer: Yeah.
Felizon: Where were you in the birth order?
Joe Queer: I was in the middle.
Felizon: Have you ever played "Hi, Mom, It's Me" to your mom?
Joe Queer: The only time my parents came to see us was when we played with the Ramones in Hampton Beach, New Hampshire. My dad came, so I dedicated it to my dad. But he was like - he didn't pay attention. They're in this room with all these people, and they didn't see the difference between Joey Ramone and the kid who did the merch table. But that was cool.
Felizon: You referred to a "no mindless, menial labor" rule. I know you used to work construction, pouring concrete.
Joe Queer: Yes.
Felizon: Did that have any bearing on your "no mindless, menial labor" rule? What did that come from?
Joe Queer: Oh. Yeah. It wasn't - I mean, I still work on my brother's fishing boat. I did it pretty much all winter, I did it all through February, March. It's basically the people you work with that drive me up the wall. You know? Like I'd get on the fishing boat and we had some guy, Keith, into the Grateful Dead or whatever, and he's kind of an asshole. And he was like, "Oh, you're in a band called the Queers, what are you, a fag?" And I was like, "Dude..." He's like, thirty-two. And I said, "Keith, I fucked more girls, at the age of forty, than you will ever fuck in your life. So if you want to call me a fag, go for it." [pauses] And that's the fucking truth, too.
Felizon: You also mentioned dating a girl who worked in a strip club. Have you read any good books lately about guys in the construction business dating girls who worked in strip clubs?
Joe Queer: Well, yeah... I read, you know, Sean's book. Yeah, so that was kinda cool.
(I'm laughing because I set this one up on purpose. Joe Queer picks up on it.) I know. That was kinda funny, you know, a little… [He stops himself.] Yeah. Yeah, yeah, yeah.
Felizon: He told me to ask that. 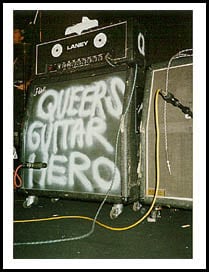