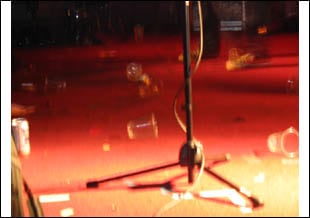 The Prodigal Ambassador: A Column

Living abroad can be a challenge. Living in England can make one want to ride the London Eye to its zenith and swan dive through the perpetually gray, overcast skies onto the cold stone walkway cluttered with tourists below. Hell, with the Eye's proximity to an (in)famous art gallery, Lord Saatchi himself would likely pay a small fortune for such a wild stunt. London is the only city I've lived in where sunglasses were mandatory, not for keeping the sun outta your eyes, but to keep the airborne filth from scratching your cornea. It's the first place I've been where the locals smoke cigarettes to inhale something cleaner than what the air has to offer. There's a perpetual, claustrophobic cloud ceiling, it takes forever and costs an arm and a leg to get anywhere using public transportation, the food is neither nutritious nor edible, and pretentious blowhards lurk 'round every corner. I'd move back in a second, without thinking twice.

The finest part about living in London was the dizzying number of great bands that came through town and parlaying my attendance at these shows into a stint spouting off about the performances for the illustrious Razorcake.com website. I took the title "Cultural Ambassador" the only way a self-respecting, would-be diplomat or foreign dignitary should - by bestowing it upon myself in a ceremony replete with cigarettes, alcohol, and drunken know-it-all shamelessness - and commenced with international underground rock diplomacy. I'd never had access to so many stellar purveyors of punk and garage rock'n'roll, and I tried to make the live reviews as entertaining as it was to witness first hand the often unbelievable stage antics (Cole from the Black Lips pissing into his own mouth and spitting it at the audience?!). Despite my first and only piece of "fan mail" calling me a liar and delivering the absolutely crushing closing line, "Down with Josh Benke, that's what I say," Todd offered me webspace to write a column (which is a month late - apologies, but it's not like people were holding their breath for it). Aside from writing about bands that I loved, the Missus and I got to meet a ton of cool people, spend an afternoon roughly a week before our departure cruising the canals of London like rich assholes, see great theater and art exhibits, and make friendships that we anticipate will last a lifetime. It's little wonder, then, that when it came time to decide whether or not to remain in London for another year, it broke a piece of my heart to know we'd be heading back to the states.

The Missus and I had mixed feelings about returning to Reno. Big, cultural centers like London attract creative people and provide access to cool shit, be it bands, plays, cuisine, etc., and we knew we were going to miss that when we moved back home. Todd aptly and perceptively pointed out another concern about Reno in an email he sent a few months ago: "Reno is a tough town... lotta jackasses around." Amen, brother! I recently had some joker, who one of my close friends described as "a great guy," threaten to have his brother-in-law kick my ass because of some untoward remarks I made about his favorite sports hero, Joe Montana (Fuck you, Jay, and your candy-assed Niners). Folks here are conservative and, for the most part, close-minded. The casinos aren't unionized and they've tricked their employees into thinking this is a good thing. There's a strong redneck presence and more do-you-know-who-my-daddy-is ol' boy posturing than I care to deal with. They've cleaned up downtown enough that when my brother was here over Christmas, he couldn't find prints of the t-shirts he'd promised his friends in Chicago: Mustang Ranch - Liquor in Front, Poker in the Rear. The bleakest discovery was that two local punk staples, Arkaic, an all ages club, and Stubwarts, the sole independent record store that sold new releases on vinyl, had closed down.

None of this bullshit mattered the other night when I walked into the Satellite Bar, though, and it hasn't mattered for a long time. Because, since I got into punk rock years ago, Reno hipsters, artists and musicians have fought to carve out a chunk of the city for themselves. 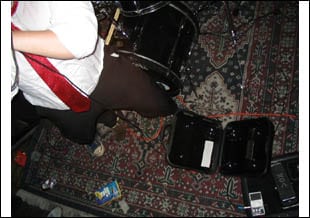 The kids in Reno haven't been handed anything when it comes to the scene, and instead of letting that get 'em down, they've kept it going by having shows in basements, cellars, garages and restaurants, and opening new clubs and record stores when old ones close. Scanning the crowd while the Juvenals played at the Satellite, I saw what makes this city's scene so fuckin' rad. A kid wearin' old-school headphones while rockin' out to the band. Another guy with the most righteous white-boy afro I've ever seen singing along to every song. Groovy chicks dancin' and hip cats bobbin' their heads to the beat. Music played from the hearts of the kids. It's good to be back home.