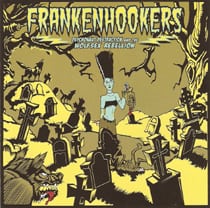 After a dorktastic evening spent using the internet to its fullest by repeatedly watching the new Rihanna video and reading reviews of HR’s reggae albums, which eventually culminated in a near-brilliant message board rant about the tragedy of Aquaman, I decided to hit the sack. I brushed my teeth and scurried into bed, eager to greet my usual dreams of punk rock and monsters. As I adjusted my pillow, the sound of a phone ringing burst through my ceiling from the apartment upstairs.

At first, I was surprised that it kept ringing, especially since I could hear the occupants wandering around. Still, I figured it was no big deal. It wasn’t as bad as the noise that usually came from up there, some of the highlights of which included the father having long, drawn-out screaming matches with his young daughter about what movie they should watch or how he is better at video games than her, or the long Sundays spent blasting what I assume are the only two CDs they own, the single of the Pussycat Dolls’ “Don’t Cha” and Poison’s Look What the Cat Dragged In album.

I tried to ignore the continuous ringing and try to sleep through it, but it was no good. After an hour of constant ringing, the sound had buried itself into my brain. I wondered what was going on. Why wouldn’t they answer it? What kind of nutcase was calling and what could possibly be so important that it would be worth an hour of constant calling? Why didn’t they have a fucking answering machine? At first, I thought it might be the young girl’s boyfriend. Young boys could be that nuts, right? But she’s not even ten, so he couldn’t be that much older, meaning he should be sleeping or watching horror movies or something else. Maybe the girl was left home alone and it was the dad calling to check in on her. If he was psycho enough to have heated, stomping battles over his dominant video game scores, surely he’d be capable of doing something this crazy. But what could I do about it?

As the night moved forward and that damn phone entered its third hour of straight ringing, I started to fantasize about my options. I considered getting up and pounding on the ceiling, but decided against it, certain that I would leave anger holes in my wake. I thought about going upstairs and calmly knocking on the door, then, when it opened, screaming, “What the fuck is wrong with you?” in the face of whoever emerged. Of course, I realized that if they wouldn’t answer the phone, the chances of them opening the door would be slim. Then I considered breaking into the apartment, ripping the phone out of the wall, and smashing everything else in my path for good measure. I pictured myself in a black ski mask and the blue boxers I was sleeping in, running through the apartment in a frenzy. Maybe I could wear the new lucha libre mask Kate’s mom brought back from Mexico. Trying to keep calm, I reminded myself of that line from the Scarface song, “Don’t shit where you sleep, keep your crib out of range.”

After four hours of ringing, I turned to Kate and told her to cover her ears. Then I shouted at the ceiling, “Answer the fucking phone!” so loud I’m certain that a good portion of the building’s residents heard it. I held my breath and, after a couple more rings, someone answered it.

As I was about to sigh in relief, an ambulance siren filled up my silence. I kept my cool, knowing that it would pass. Seconds later, I had my silence again. Then Kate started snoring. I groaned, woke her up, and told her to change positions.

Just when I thought I was ready to get to sleep, that goddamn phone started ringing again. Practically frothing at the mouth with rage, I crawled out of bed and decided just to give up. I made myself a sandwich and went to see if that new Rihanna video was on.

Tonight, I’m going to prop my boombox up next to the vent and see what kinds of annoying sounds I can blast into their apartment. Some of my choices include:

WITCHES WITH DICKS: Manual: CD
These guys could probably piss off the upstairs neighbors. They’re gruff, brash, and just grating enough. More than the music though, my primary concern is the name of the band I think a witch with a dick would actually be a warlock. Or are we talking about transsexual Wicca here? Strangely, the picture of them on the inside cover just makes them look like an ordinary bunch of punk dorks with no relation to witchery of any gender or transgender. Are they secret agent gender-neutral witches? I doubt it. They have a song called, “One Whopper for the Copper,” which is certainly amusing, but it is neither evil (like the old-school horror movie version of witches), or spiritual (like the new-school, boring hippy earth mother version of witches). This shit’s not even goth. Actually, that’s probably for the best. –MP Johnson (Kiss Of Death)

FRANKENHOOKERS: Psychonaut Destruction and the Wolfsex Rebellion: CD
Vicious, sneering, and prowling like a werewolf weaving through the woods under the full moon, this band understands horror punk. They know that rockabilly is for greasers, not for monsters. You won’t find any goofy-ass, stand-up bass here. It’s all fucked-up guitar and vocals that alternate between squawking and stabbing. Every tune is a severed head, chomping its jaws as it rolls downhill in search of some soft flesh to sink its rotten teeth into. From the slasher roar of “Necro Rising” to the undead slither of “Zombified,” this disc is a demonstration of everything good that can be done when horror and punk are combined. Shit, they even got scream queen Linnea Quigley to pose for gore pictures on the inside cover. –MP Johnson (Roadhouse Tunes)

BLANKET OF M: Cotton Candy Autopsy: CD
Judging by the preschool illustration of a deranged surgeon holding cotton candy as he hovers over a woman with a large forehead, I think it’s probably for the best that my crazy mailman decided to smash this particular disc. There are different kinds of horror, and this didn’t look like the kind I wanted to put myself through. –MP Johnson (OBZ)

I think I know what is going to be blasting from my boombox tonight. For more stuff, go to http://www.freaktension.com/.

As far as I’m concerned, Aquaman’s the greatest tragedy in the world of comics. Not as a character, or in the stories, but in how he is treated. He's gone through countless origins and numerous reinventions, one more ridiculous than the next. I keep picking up the books for short periods, hoping that someone will treat him with some respect. I walk away disappointed every time. When underground comics icon Rick Veitch was attached to the new series, I thought for certain he would do something worthwhile with it, but no, he gave him a hand made of magic water and then left. Aquaman was just recently turned into a squid creature and then killed. Real nice. He's torn between writers who want to paint him as some kind of underwater god and ones who want to humanize him to the point of soap opera. Why can't they just let him be Aquaman?