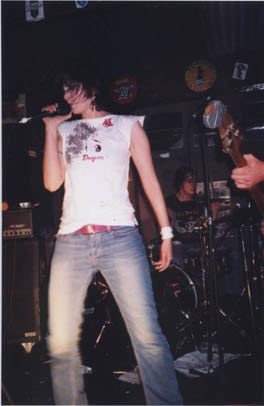 The Not-So-Great Garage Shutdown Shindig: 10 Reasons Why I Won't Miss The Garage

A few days before the Garage closed its doors for good, I went to a toga party at some rich guy's house in Venice Beach. The guests were in full-on Roman attire: centurions, senators and shirtless slaves. A DJ spun records. Masseuses stood by to provide guests with massages. The punch bowls were spiked with grain alcohol and in the kitchen there were massive platters of marshmallows and strawberries and a big bowl of bubbling chocolate. I arrived (sans costume) at around one a.m. to pick up a friend and things were starting to get strange. Illicit activities behind closed doors. People fucking in the hot tub. Borderline lesbian encounters in the bathrooms. I spent most of my time dipping strawberries in chocolate and watching the scene. It was interesting to show up late for the party sober just when things were starting to slide into debauchery, but not that interesting. It all seemed so ostentatious and predictable and lame: a bunch of middle-aged rich people getting lit and pretending to have a bacchanal. I'm actually glad I went because it was something I needed to see with my own eyes.

Fast-forward a few days to Monday. I went to the Garage and found out there were eleven bands on the bill (Reason #1) and the two I wanted to see were going on last and next to last (Reason #2). I ran into Megan Pants and Sean from Toys That Kill and we went to 7-11 to buy beers, which we then brought back to the alley behind the Garage and drank. I have a lot of fond memories of this alley. Smoking pot in Smogtown's Gross Polluter. Sneaking in the side door by masquerading as a roadie. Interviewing the Spits, who love drinking in alleys so much that they wrote a song about it. I was too busy drinking beer, passing the flask, making new friends and getting reacquainted with old ones to get nostalgic, but as I was telling a story I realized how much I much preferred drinking a tallboy in the alley with my friends over partying in a mansion with a houseful of Spartacus wannabes looking for an excuse to be somebody else for a few hours, even if it meant getting gacked to the gills and climbing into a whirling pit of bacteria frappe to fuck a stranger.

But since this is a punk rock story, and we were having a good time, it was fated to come to a premature end. Some tool came out and told us we couldn't drink in the alley anymore (Reason #3) and we all grudgingly went inside in time to catch Texas Terri Bombe (Reason #4). (I'm not even going to mention the other bands that played since I didn't see them, nor do I want add to their delusional belief that they contributed to something meaningful and important.) I bought an overpriced drink (Reason #5) and watched the show. Because Texas Terri is like a legend, she got special treatment (Reason #6) and played an extra long set. However, the difference between being like a legend and being an actual legend is pretty fucking big and my mind went elsewhere for a while.

I started thinking about some of my favorite moments at the Garage and this is the list I came up with: the Stitches the night the Rezillos were in town, the Humpers (!), the Flipside benefit, the night the Briefs played with the Von Steins, steaming up the windows of my truck between sets, Rusty Monday's birthday party, whenever Erin Duffy the bartender extraordinaire was working, any night I could look around and count more friends than strangers. That's not a bad list even though the sound consistently sucked (Reason #7) and the bands were consistently screwed (Reason #8).

To Texas Terri's credit, she closed out her set with some covers, which were preferable to her own songs, and the Tyrades took the stage. The Tyrades are from Chicago and they just released a self-titled full-length on Broken Rekids, which you should buy right now . They're a four-piece punk rock outfit with a ferocious lead singer who looks like Pat Benatar's guttersnipe sister and sounds like Alice Bag. She nailed her feet to the floor and went crazy, yelping and yowling like a cat in heat. The guitar players, Jimmy Hollywood and Robert Miscellaneous, towered over Jenna on the tiny little stage (Reason #9). 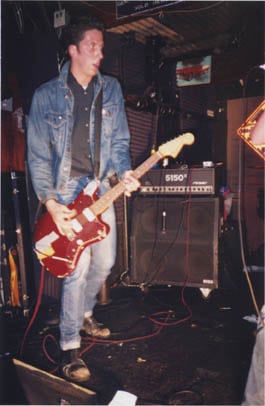 Jimmy slashed away at his guitar, slamming down jangly riffs and spastic hooks. Robert's bass playing was big, boss, and super clean - a direct counterpoint to the strangled-cat sounds screeching out of the guitar. Dave Unlikely from the Trailer Park Tornadoes pounded out the beats. Put together they had an edgy, menacing sound that was more than slightly sinister. ("Cut Your Feet Off," "Same Sex Killers," "Plastic Bag Baby.") I'd only had the record a week, but once their songs got their menacing little hooks into me, they wouldn't let go. The Tyrades laid down a tight, blistering, fifteen-minute set that ended when Jimmy picked up his guitar and drove it neck-first into the stage, smashing it to pieces.

San Pedro's Toys That Kill wrapped up the show with a sloppy, raucous, noise-filled set reminiscent of an alcohol-addled and drug-fueled jam session. ("Yo, $, I thought you liked TTK?" Oh, but I do, I like them very much, just bear with me a minute.) They played one fifteen-minute song (I think it was "Season Finale" but I'm not really sure) that was more like a series of loops with Chachi and Little Jimmy carrying the rhythms and Todd and Sean committing the musical equivalent of tagging the walls with their piss. It was awesome. 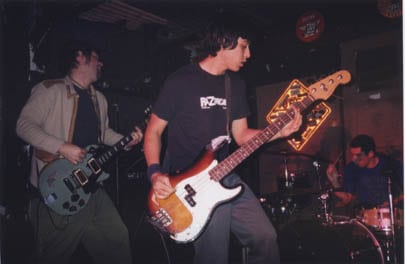 The crowd just kind of stood there wondering what was happening. I wish I could have been onstage to see their confusion and then anger as they slowly came to grips that this was the last song by the last band for the last show at the Garage and this was all they were going to get: fucking noise. About ten minutes into the song Todd propped his guitar against the amp and walked off the stage. A few minutes later Sean did the same thing. Chachi followed a few minutes later, leaving Little Jimmy to soldier on while the abandoned instruments spurted feedback. The message could not have been any clearer: Fuck you. So good-bye and good riddance, Garage. (And while you're at, why don't you take the clubs on Sunset with you?) There will be no tears, no heartfelt farewells for you. My only regret is the place is still standing, and that is Reason #10 why I will not miss the Garage.