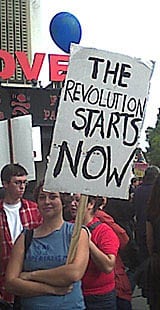 This article was written by Shahab, who runs Geykido Comet Records (along with his lovely wife, Heela) and is in the No Apologies Project. He emailed me his remembrances of the Los Angeles protest and I thought it would be cool to share it with the Razorcake readers. Check out Geykido Comet's website for more protest pictures and some grade-A, kickass rock'n'roll (the links take you to two different places). Also, for clarity, Shahab writes about coming from Orange County, which is about twenty miles south of the Los Angeles/ Hollywood area of the protests he attended. -Todd

We arrived at the Union Station in Downtown Los Angeles by about noon. We were making good time, as far as I was concerned, because the march did not start until one. Little did we know that the trials would begin at the station.

Heela, my wife, and I woke up early and began preparing for the trek up to LA. There was an Orange County protest going on in Orange, but I felt like joining 100,000 other people giving this government and the people around the world a statement - we will not sit by quietly while cowboy/cokehead Bush continues to fuck with the world and the view of everyone residing in America. (Fuck, the entire world hates all of us.) I didn't feel up to going to a protest with a mere 1,200 protestors and be heckled by Nazi-like patriotism all day. I'm glad we made this choice. The air of anti-Bush sentiment was amazing and everyone was having a great time voicing their opinions.

Jeff, my fellow bandmate, came well equipped with new CDs, a backpack full of necessities and last but not least, his insulin. Our friend Janelle arrived next with a bunch of poster board. The rest of the gang (Kevin and the San Pedro kids) were going to meet us there. By the time we left, it was already 11:30 and so we decided to write up our slogans on the posters after we got there. 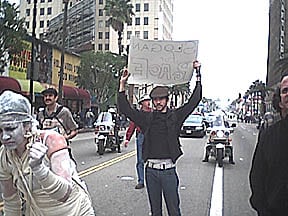 The Union Station parking lots were all full. There were signs and protestors here and there resting in the shade and waiting for other members of their party. We parked just down Vignes Street in a 24-hour parking lot, marked up our poster boards ("Fight War, Not Wars," "No Blood For Oil," "Stop U.$. Sponsored Terrorism," "Slogan for Peace," "Drop Bush, Not Bombs") and walked to the station.

The station seemed pretty empty, and for that we were thankful. The four of us had never been inside this station and had never taken the Metrolink subway before. As we walked downstairs to the Red Line, the actual crowd came into view. The lines were excruciatingly long and it seemed all of these people had never taken the Red Line either. Purchasing our tickets took us almost an hour-and-a-half. By the time we made our way to the subway platform, we had no patience left to sit and wait for the train. The march had already started! We felt restless, as if we had wasted too much time already. There were a handful of us on the platform who had tickets, but no more than two hundred total, including those still in line for tickets.

Finally, the train to North Hollywood arrived and we stepped on. Plenty of seats everywhere. No one was left standing. We took our places and I ended up next to this really nice older couple from San Pedro who asked me about the buttons on my backpack, the buttons I rarely think about, the buttons I have accumulated since the age of fifteen. The gentleman showed me his one and only button. It was for the union he belonged to. As he told me stories of trips to Turkey and abroad, more and more people (protestors being a majority of them) got onto the train. It seemed like no one was getting off. They were all headed to Hollywood and Vine. We weren't too late after all.

Soon, the train was overflowing. With each stop another influx of protestors climbed aboard, followed by a gleeful cheer. All were able to fit inside. 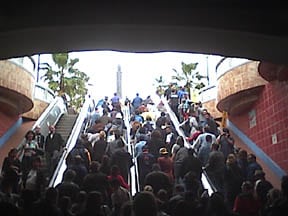 As we climbed the stairs, it was almost two o'clock. I hated the fact that we were late, but at least this multitude was late right along with us. Climbing the stairs up to street level, I expected to see stragglers and cops, proof we were all late, that we'd missed the march, but this was not the case. Signs, posters, chanters, photographers, cops and helicopters greeted us and I couldn't help but smile.

The four of us un-rolled our posters and joined the march.

There was an art group, dressed in torn cloth, with white-painted faces at the end of the marchers. They were moving along slowly, creeping along like the dead - swimming, almost dancing. You, too, would have gotten teary-eyed if you saw such a beautiful sight. The pigs didn't like this and started making noises with their sirens and blaring through their megaphones for the pedestrians to "Get on the sidewalk!" That's quite a silly request, I thought, for a march through blocked-off streets. They probably didn't like the speed of the marchers, being held up by these "crazy" art freaks. Jeff jumped right in front of them and proudly held up his "Slogan for Peace" poster. It was hilarious watching the cops try not to be confused by his artsy poster slogan. His poster received many accolades throughout the march (mine never did) and the cops had no idea what it meant. Not a clue. You have to pass tests to become a cop, right? I guess IQ doesn't mean everything.

As we headed down Hollywood Blvd. toward La Brea, we caught up with a group of musicians gathered together, jamming all the way down the street. There were tambourines, drums, buckets, sticks, flutes, trombones, saxophones, clarinets, trumpets, dombaks, toms, cowbells, shakers, and finger castanets. It gave us a good feeling, holding up our posters, putting them aside to clap along with the songs, dancing in solidarity. Just before Cherokee Blvd., the musicians all stopped and the saxophone player became a sort of ring leader. He searched through the crowd as the song was being played and chose the other musicians to come into the center of the group and perform a solo with their particular instrument. Horns, percussion, wind, it didn't matter. If he spotted you, it was your turn next. During each and every solo, the crowd (as well as the other musicians continuing to play) hushed themselves to be able to hear the lone instrument. After each solo we all cheered in appreciation. It made me kick myself in the ass for not bringing my tambourines or a drum of some sort. Last time I was at an anti-police brutality rally in Hollywood, there was a group of musicians as well. I'll know for next time.

At this point I turned to Jeff. "Hey, do you see that guy over there with the big microphone?" Apparently he had spotted this guy too. "I need a copy of this! I NEED IT!" The improv, the solos, the anti-war slogans… I needed to hear it again! I ducked through the crowd, ditching Jeff, Heela, and Janelle for what I thought was to be only a moment and caught up with this guy. He looked to be about my age, taller, with long curly hair. I asked him what he was doing. Apparently, he promised his friend in NYC a copy of the entire protests on DAT for him to take excerpts and use on his radio show on the East coast. He said he'd send me as much of it that would fit on a CD as long as I gave him my address. I pulled out a piece of paper and a pen from my bag, but the pen wouldn't work.

"FUCK!" I yelled out of frustration. The march had begun to move again and I had no idea where my party had gone. They were already nowhere in sight. I turned around and saw an old man talking to the curly haired audio-recorder. "Do you have a pen?" I asked this fellow, with no real hopes that he would have a pen, wondering what I would do if I couldn't give this guy my address… I NEEDED THAT RECORDING! "I do have a pen…" I was so relieved that I was able to find a pen and proceeded to give the younger guy my address. I thanked both men again and headed off back to find my crew.

Eventually, we met up with some of our pals from San Pedro, saw more friends than we thought we'd get to see in such a big crowd, and ended up leaving exhausted and proud after a day of representing the voice that is seldom reflected in this country's media. Just before we left, this short-haired girl approached us and asked if we wanted to help her out with her art project. "What is it?" I asked. She proceeded to explain to us that any media coverage of the march will be distant for the viewer; no connection. She wanted to single certain people out of the crowd and videotape their faces as the noise and music and slogans were also caught on the tape. But as she taped these select marchers, she would reach out and touch their faces to give the viewer a one-on-one experience with individuals at the march. We agreed to help her out as long as she sent us a VHS copy of her completed project. She was happy to do so, so three of us complied (to the disbelief of our friends who didn't hear the girl explain what she was doing, and then glanced over to see some stranger caress our faces on video). Afterward, we explained the situation. We were on our tired way back to the station.

The next day, CNN estimated about 75,000 people had attended the march in Los Angeles, per reports from the police. Indymedia.org estimated about 100,000. The OC Register reported a whopping 15,000. Hmmm. Well I was there, and let me tell you, that sure-as-fuck was not just 15,000 people. At the very least, it was 50,000. Orange fucking curtain. Keep the rich people who vote, yet never leave their ten mile radius safe-zone, unaware of what actually went down.

Good thinking guys. The Nazis didn't use propaganda either!