San Diego breeds hard-to-define, hard-to-beat bands if they can thrive more than five years. In flaps the Locust. The name's appropriate. They're a ravenous swarm. Yeah, notes are hit like a blizzard of wings. Each song is an instant, devouring deluge that comes quickly, strips meat off bone, and finishes before you can read the song titles all the way through. Claimed by many to be the future of hardcore, it's hard to not like them just by the fact of how many nails they've got loaded into their musical bat. And that they're not jocky metal heads doing push ups between songs. But it's not all blast furnace beats. They set a definite, all-encompassing tone and make some - albeit brief - filigrees and keyboard interludes that hint to more ambling musical pastures. Make no mistake, though, they're torture to emo kids and they're all about the fucking burn.

Matt Average and Todd Taylor got to talk to bassist (and one of the singers), Justin, before their packed show at LA's only consistent all-ages venue, The Smell.

M.Avrg: The Locust has lasted longer than your other bands, Struggle and Swing Kids. What is it about this band that makes it work for you?
Justin: Fuck, I guess the fact that we morph into another band here and there, kind of continues it somehow. The other bands would end because people would move, mainly to go to school, and this one, we're all pretty dedicated to playing in a band. As far as the line-up changes The Locust has had, if we were to lose a member and break up, the rest of us would still play together, so we keep going. I'm not really sure why. It just kind of happens.
M.Avrg: Would it be something like The Locust or would it be something entirely different?
Justin: What do you mean? 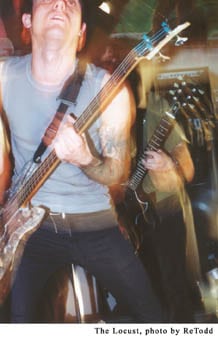 M.Avrg: Theoretically, if The Locust broke up...
Justin: Our keyboard player, Joey, is in Le Shok and they went on tour, and for a month, me and Bobby and Gabe from The Locust started a band with Mark of Charles Bronson and Ron from Get Hustle and we recorded a record as Holy Molar. It kind of sounds a little bit like The Locust. It sounds different mainly because the drumming is more jazzy and freakier, but the music, somewhat, sounds like it could be. It's more like rock. It's not brutal, or whatever you want to call it. It's catchy.
Todd: So how long before you get officially licensed Locust underwear?
Justin: I dunno. We kind of just stumble upon all of the stupid shit that we make, so if someone approaches us with a bunch of underwear then we'll take care of it.
Todd: You guys have a marketing program - lots and lots of merchandise. How'd you get effective at it?
Justin: I think it's just that we're resourceful with what we come in contact with. It wasn't like we set out to put out stupid merchandise or something or do dumb kinds of records, it just kind of happened. We're kind of eager to do something different.
Todd: So, Locust toothpicks could be a possibility?
Justin: We've thought about some seriously stupid shit and if we had the means to produce fake Locust mustaches, we would. It just hasn't happened yet.
M.Avrg: So where do you draw your inspirations for the music? It is a bit different, but at the same time…
Justin: I think, as far as the people who are in The Locust, everyone's got really eclectic tastes, so therefore our influences are going to come from the whole spectrum. Literally, the whole fucking thing. You can hear this and that in our music. It's not like a grindcore band or a deathmetal band, or speedmetal, or hardcore, or punk, it's everything. If you went and looked through all of our record collections, you'd probably just think we were totally fucked. We probably have everything on the face of the planet, I guess.
M.Avrg: It seems that the mind frame is: "I'm pissed off. I'm more inspired to write a song."
Justin: Definitely, our lives' situations can influence the things that we write. I'm sure it will be more aggressive and hostile than if we were like a bunch of rich kids living in some bourgeois neighborhood and if we had mom and dad paying our rent and shit. So, yeah, we're shitty punks and we're poor and we fucking hate a lot of shit, so our music sounds nasty. That's why it happens.
Todd: Where do you think your music is going to go? What type of influences are different members trying to push it? Are you going to go slower? Are you going to add horns? Are you going to get an orchestra?
Justin: I think with the newest change that we've had - we have another drummer - and so we kind of lost the more deathmetal edge. The four of us are really comfortable with that and we're kind of more excited. Not that we're going to become more slower or whatever you want to call it, I think it's just going to get more fucked up and twisted along the lines of circus music or something.
Todd: I listened to your self-titled album yesterday for four hours, and one thing I didn't realize before is the underlying creepiness and presence of Joy Division.
Justin: Yeah. I think some of us are fans of Joy Division, so that could be it. I really don't think that subconsciously we set out to sound like a certain thing. When I write music, and I can probably speak for the other people in the band, that we don't go, "Oh, I've been listening to this and now this sounds like this." It's like it just happens.
Todd: It's not like an iron-on. I was just surprised to find it underneath.
M.Avrg: So what are the ways that the music is being twisted? Mark (McCoy) was saying that you're trying to move away from more traditional noise, traditional chords, and trying for something different.
Justin: Well, I think that Bobby, the guy who plays guitar, I don't know what the fuck he's doing half the time. It's some weird shit. It's cool. He's created chords I don't think have ever existed and it sounds great. With pitchshifters and harmonist pedals and delay pedals and stuff, you can make it sound even weirder. I guess we're just kind of trying to get it so the tones aren't so normal sounding, so it doesn't sound like power chords and hardcore. It just sounds sci-fi, sick, psychotic - something that hurts or is uneasy and edgy. Breaking glass doesn't sound comfortable. It sounds like, "ahh, fuck," so maybe the music can sound like glass breaking. It kinda hurts a little bit.
M.Avrg: That's the deal with the song "Sever the Toe." When I listened to it, it's kind of like sci-fi, doomsy sounds. Kind of like a knife, in a way, stabbing at you. 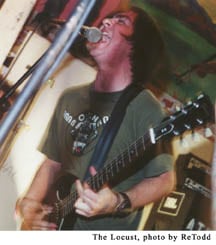 Justin: It sounds really robotic.
M.Avrg: Kind of like a robot spinning out. Sparks flying...
Todd: So, how does one land a gig doing a soundtrack song for "Toxic Avenger IV" and playing at the Playboy mansion?
Justin: I don't know. We got a call, and they were like, "We want you to play. Can you come up today?" We just got home from Japan. The next day, we went.
Todd: Was there weird shit?
Justin: It was kind of stupid, actually. It's cool to be part of something. Troma is a pretty influential, creative movie company, I guess. They have their bad parts, or… whatever. It was interesting, not to say the least. It was really cool to go there and there were, like, weird movie stars. We were in the Playboy mansion, which was fucking ridiculous. I think it was just set up half-assed. We didn't get treated all that well. I dunno. It was weird. We still don't know what's going on with the movie. We're in it, acting in a bunch of scenes, and we're playing in it and no one will reply to us and tell us, "Oh yeah, it's going to be out."
Todd: Or you can rent the video when it comes out.
Justin: If it comes out. I heard it was supposed to be out in August 2000 and it's going to be the next August.
M.Avrg: What about the John Waters film?
Justin: He just had his people contact us because he likes The Locust.
M.Avrg: He knows you guys?
Justin: He hand-picks everyone, from what I hear. We've never really met him, but his people contacted our people, and the next you know… That was a fucking dream come true.
M.Avrg: I was watching the movie and I was like, "What the fuuu, holy shit."
Justin: I think it sounded really good, it fit really good to it, just the beat. I won't complain about John Waters' film making at all. That's a privilege. We were so stoked on that. It was great.
M.Avrg: So, when you talk about music that hurts, I've read that certain tones can create bodily reactions.
Justin: That would be great. We actually used to have this insane siren. I don't know what it was from. It was weird and it would make people just freak out and leave. We'd clear rooms. We cleared The Gilman. No one was in there after we were done playing the Fiesta Grande. It hurt. You could feel it in your stomach. I'd sit there, "Fuck, when are they going to stop doing that?" It's, like, my band, and I'm crouched over, ready to throw up. It was insane. It was really bad.
M.Avrg: What about experimenting with low frequency noises that people can't pick up but their body can?
Justin: That would be interesting. I don't know if we have the instruments to do that. I would like everyone to shit their pants while we're playing. I'd probably end up shitting mine, too.
Todd: But then you'd have your official Locust Depends undergarments to protect you.
Justin: The Locust, we've actually been playing in diapers a bunch, so that would be cool. No one would know why until they all shit in their fucking pants. I'd be all for it. Especially if we, like, were playing… we're doing this tour with At the Drive-In and they're pretty big, so it would be great to be playing with them and have all of the normal masses shit their pants. I'd love it.
M.Avrg: You could make t-shirts. "I saw The Locust and shit my pants." I have a low frequency CD I was listening to yesterday. It's really weird because these different frequencies cause your body to react and they're not even harsh sounds. One frequency, like, your head feels all stuffy, your ears feel full of cotton. And there's one, like, your stomach. If it keeps going, it feels like you're going to puke. You start to feel nauseous. I thought it would be kind of cool to play in a band and have this kind of bleed through the music.
Justin: I'd be all for that. Someone should do it and make me shit my pants. That would be great. 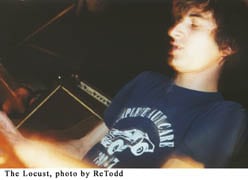