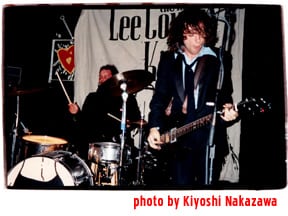 The Immortal Lee County Killers Interview:: How to Build a Cadillac Pick-up Truck By Bradley

All photos by The Drunken Master Kiyoshi Nakazawa

I had lost the tape. The observations and wordings of the Immortal Lee County Killers II lost forever. Ah, the souring drama!

Nevertheless, like an archeologist I searched. I would not give up hope. I had asked questions. I had recorded. The tape had to be somewhere. Technicolor storm clouds rolled over the horizon in fast forward. I scoured the debris cluttering my car.

Spiders scurried from under the seats. Small, large, hairy, and bald they came. The evil bastards were guarding something. This had to be the place.

Frantically I searched, by tactile perception only, holding my breath and wincing in disgust and perverted terror as the critters passed over my arm in the unseen reaches under the passenger seat. Still deeper I reached, up to my shoulder. I could go no further. The eight-legged bastards were making their way onto my face. I couldn't take it. Then-then I felt an empty coke bottle-shit-old cigarette packs, quarters. This was a rich find, but these were not the objects of my desire. Then finally in an anti-climactic grasp I felt the Sony TCM-359V cassette-recorder under the seat, wherein the tape of the Killers was stored! I removed it from under the seat with such quickness that the momentum landed me on my back on the garage floor. But no mind, I jumped up, holding the Sony in one hand, and brushing the dust, sticks, and pieces of cellophane from my clothes with the other. Spiders?! Spiders, oh shit-I was clean.

My eyes gleamed while in my hand I held the tape. The Immortal Lee County Killers II interview! What treasures would it hold? What mysteries solved? The hearts of women would be wooed into submission with its power! Greed rushed through my veins like so much cocaine heading towards the heart. This would be the greatest discovery of March! 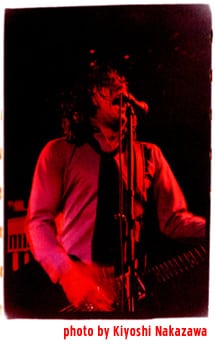 Before we get any further, the Immortal Lee County Killers II are Chet "el Cheetah" Weise on guitar, harp, and vocals and J.R.R. Tokien on drums and vocals.

The first minute is inaudible, but I'll tell you that I was asking Chet "el Cheetah" Wiese about the Quadrajets (http://www.quadrajets.com/), a band both him and the Killers' new drummer, J.R.R. Tokien, were in.

Cheetah: I can't remember my last show with the Quadrajets?
BD: My batteries are going dead? Shit? So how did the Killers start up out of the Quadrajets?
Cheetah: We (ILCKs) started playing outside of Auburn (Alabama) and we put out a record (7"), and did tours. The last summer, he (Boss, the Killers', drummer prior to Mr. Tokien) and I toured together and it went really well. We came back with a good amount of money. People were talkn' about the Killers and I'm just sittn' around thinkn' I'm 31 years old. In another 40 or 50 years I'll be dead. Ah? I want t' rock! And I told him that and he said, "Yeah, I know. He said, "I can't do it with ya'," and I already knew that J.R? J.R? I guess what broke the camel's back is that Nebula had offered us a tour and the Boss couldn't do it 'cause he's got NASCAR in his sights. You can't print this stuff about the Boss.
BD: So you were on your way to a Ph.D. in economics and you just dropped out of it?
Cheetah: Yeah, I quit teachn' and dropped out of the Ph.D.
BD: And what prompted it all?
Cheetah: 'cause I want to play music!
BD: So it just hit you?
Cheetah: Yeah, I mean the reason I was still in school was 'cause it was the best way to pay the bills and still play music. You got summer vacations and stuff. I enjoyed going to school, but when it looked like maybe we could pay the bills and get by on a shoestring that's when I was like, "Hey man! I'm gonna' do this." The Boss is playing in Baby Driver now.
BD: They're a bunch of pussies
Cheetah: Yeah. Some one offered to put out a record for them.
BD: Really?
Cheetah: Yeah, Go Kart (http://www.gokartrecords.com/) Records out of New York, so he's gonna' be able to record and go on tour. It's gonna' be more on his schedule.
BD: You and J.R. are on the fuckn' marathon schedule right now. I saw the tour dates and I thought, damn!
Cheetah: That's not even all of it.
BD: Yeah, I know you got the Doctors of Rock! (European tour with fellow Estrus intellects, The Soledad Brothers http://www.soledadbrothers.com/)
Cheetah: Yeah, yeah that's coming up. Now we're gonna' go home (Bama) for two days then go back to the Midwest, come home for five days, go back to Texas. We got to finish up the record and then we're going to Europe. 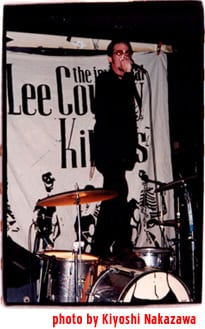 [After that there followed a drive though the Sliver Lake area of Los Angeles that ended at a house overlooking a whole bunch of lights. In the morning I woke up J.R.R. Tokien for a few words while we walked down Melrose Ave.]

[This is followed by sporadic lunch/breakfast conversation and snapping and popping sounds that the recorder picks up from the devil knows where. Then the Tokien One and myself were walking up and down Melrose Ave. on a bright southern California day stopping at various coffee shops so J.R. could get a red eye (one shot of espresso in one cup of coffee) at one and then a double red eye at another.]

Dr. Tokien: The Tokien One's got a set of you-know-whats as big as all of LA is and that means he can just lay them-wwwooooooo-right on your monkey ass whenever he wants to. L.A?. Lower Alabama.
BD: That's right, boy.
Dr. Tokien: On March 16th the Tokien One's gonna' go nuts and bleed three pints of blood!
BD: Where's that at?
Dr. Tokien: That will be in Emos. We're gonna fuckn' love it!
[As we continue strolling down Melrose Ave., a silver Cadillac Escalade rolls by.]
BD: Look a' there J.R., what about touring in that?
Dr. Tokien: The Tokien One's gonna' get him a Cadillac Escalade and a chain saw and cut the back off it and make it into a straight-up Cadillac pick-up! [laughter]
BD: No shit!
Dr. Tokien: That's right. I'll drive a Cadillac fuckn' pick-up. How redneck is that?!
BD: That's fuckn' down.
Dr. Tokien: Let's stop at one of these stores so's the Tokien One can get him a cigarette lighter. You know, just an 'ol Bic for a dollar or two, so I can have my souvenir from LA.
BD: There's one right up here.
[Noise]
BD: So ya'll be in San Diego tonight?
Dr. Tokien: Yeah, San Diego tonight.
BD: Who's it with?
Dr. Tokien: Bar Tenders Bible and Bob Log.
BD: What's Bar Tenders Bible like?
Dr. Tokien: That's some of the best Country and Western music going today.
BD: Ya'll got a title for the new record yet?
Dr. Tokien: [leaning close into the tape recorder] The next Killers record is Love Is a Charm of Powerful Trouble.
BD: All right. This one's for all the ladies out there. For all you who may read this story or partake in a Killers show?
Dr. Tokien: That's right, ladies. If you got a husband, get a divorce. If you got kids, send them to grandma's house. If you got a boyfriend, you put that dog to the curb where he belongs, baby, 'cause the Tokien One's coming into your town. And that means, baby, if you get a little itch for the Tokien One and the Immortal Lee County Killers-then go ahead and scratch it! Cause going one-on-one with a Killer will definitely make you famous? Woooowww!
BD: What about the Quadrajets? Any chance of catching a Jets show in the future?
Dr. Tokien: The Jet's'll do Garage Shock. That's about all we can do. Which, this year, will hopefully be in Japan. J-pan! I can't wait to get to J-pan just so I can go "All right! Is Mexico ready to rock?!" just to see the looks on their face. That'll be awesome.
BD: How's not having a regular job doing you?
Dr. Tokien: Seven days a week, 365 days a year, including leap-year, the Tokien One is on the clock. Night-in and night-out, day-in and day-out. If you don't sleep in your own bed, you're at work, and if you're sleepn' in some fine female's bed, you better be at work or better get to work. One of the two. [laugher]
BD: Any last words?
Dr. Tokien: Yeah. Support the little man. Support the mom and pop. Hey man, want to buy a watch? 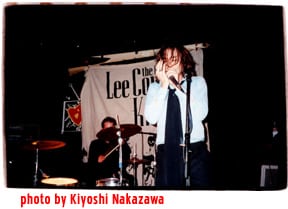 This has been brought to you by the A.D.M.F., proud sponsors of the Immortal Lee County Killers II.