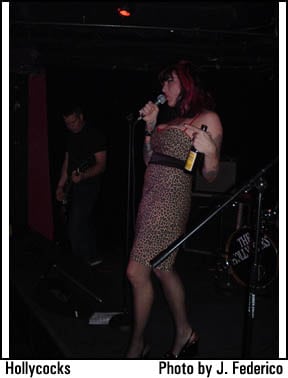 I was happy that I could entice some friends to come along with me to the show at Annie’s Social Club (http://www.anniessocialclub.com/) on November 30th because it seemed like it would be a good time: The Hollycocks, the Heartaches, and La Plebe. I did not think I was familiar with The Hollycocks (although as soon as I saw them playing I realized that I’d seen them before), but I’ve recently been enjoying The Heartaches’ album Too Cool for School and La Plebe are always loads of fun to see live.

The Hollycocks (http://www.myspace.com/thehollycocks) were already playing when we arrived at the club. It was a little crowded, probably not only because of the line up, but also because it was Annie’s birthday. As mentioned, as soon as I saw them onstage, I realized that I’d seen them play before. They hadn’t won me over that time, but at Annie’s I enjoyed them a lot more. The singer, Heather Zero, really does have a powerhouse voice and she seemed to be in a pretty aggressive mood. Good stuff!! Very occasionally her voice had a howl-y Siouxsie style, but it’s deeper and generally a lot more fierce. I could see where comparisons between her and Cinder Block (Tilt, Retching Red) might also come up, but I think (although, really, I don’t know anything about this) maybe Heather Zero has a bit more range. Who knows?! Anyway, she sounded good. The (male) backing vocals made me think of Tad. They did a cover of Poison Idea’s “Just to Get Away” and that made me happy, happy, happy. Heather also sang a Marilyn-Monroe-as-punk-rocker breathy birthday song to Annie while one of their amps was being worked on, and it was kinda sexy. In general, they are a straight-ahead sort of band—not too many surprises, but, at the same time, they don’t pull their punches. The song I liked the most may be called “Riding for Keeps” (didn’t see it on their myspace page, though), and it was a good, creepy little number. 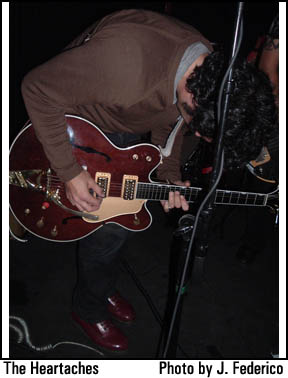 The Heartaches (http://www.myspace.com/theheartaches) from San Diego were next. They’re also what I think of as a pretty “straight-ahead” band, although they have more garage and rock’n’roll influence. If you like that kind of stuff and you don’t have Too Cool for School, you should consider picking it up cause it’s a super fun album. The skinny, enthusiastic singer had a bit of a Mick Jagger hand-on-the-hip thing going on and looked like the blond afterbirth of Eric Davidson (New Bomb Turks) and Jack Grisham (TSOL). They played a great song that I didn’t know after “Teenage Hypochondriac” (which has a totally excellent ending) about hanging out in the garden and I pictured greaser werewolves and full moons. I was especially happy when they played “Kamikaze Love,” a fucking awesome song and my favorite off their album. During their set I realized that one thing I love about music is all the other good things it makes me think of. Yay! 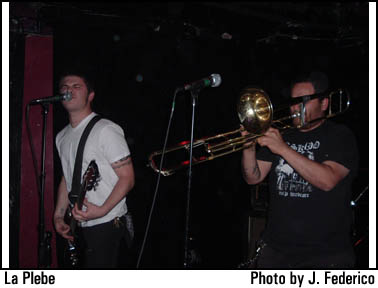 San Francisco favorites La Plebe (http://www.laplebe.com/ and http://www.myspace.com/laplebe) played last and, as usual, were earnestly and happily received by the crowd. They are a punk band with ska influence (and a two-man horn section) that sing in English and Spanish, promote the good politics, cover “DirtyOldTown,” and encourage people to go have a drink at the bar after the set. I feel like I have seen them loads of times and it’s pretty much always fun. They get the crowd moving. At one point someone in the crowd brought a phone that had been dropped up to the band and they held it up to see if anyone recognized it / was missing a phone and said to the guy that brought it, “Good looking out!” At the time, it gave me a little warm fuzzy because it seemed like a tiny, relatively unimportant, and insignificant example of the best things about punk community; looking out for each other.