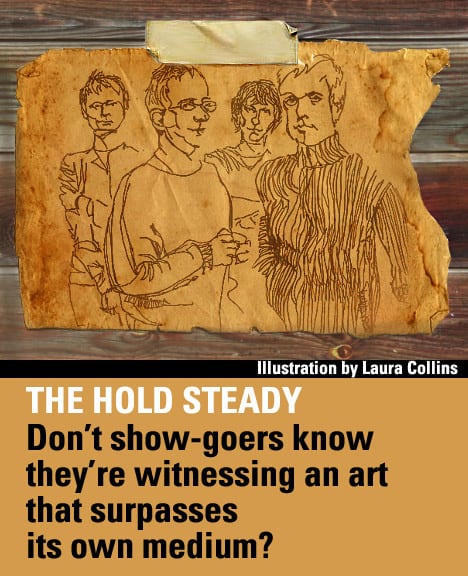 The Hold Steady and The Gaslight Anthem: live at Pier 26, Manhattan, NY

Line Up, Get In

Come on, this is New York! This is where dreams come to die, spluttering bad smells and clinging to clichés.

I’ve been baked in romance since we landed. Even the junkies on St. Mark’s looked happy in my eyes.

What if this was the last show? What if we never went home? Come on, we’ve gotta find Pier 26; we’ve gotta make this last.

Who knew Manhattan was so easy to maneuver? Who knew Eden was crammed between subway tracks?!

Some dozen people are already lined up as we make our way around the corner. We see leather belts with subtle black studs and kids too young (or too old) to smoke but smoking anyway.

It’s hot. My shoulders crack, ready to weep red and I let them, too intoxicated by the sound check. “Hurricane J” is being played across the water and I’d be glad for Jessie to crash into this harbor because I don’t wanna wait until I get older, either.

To me, The Hold Steady is more than a band. It’s the first (and probably last) act that has inspired my writing as much as any novelist has.

I’d like to swim through the swamp and swarm the stage like a pocketful of giddy syphilis but then I remember I’m living real life, not a TV serial. (Too bad—a montage would cut the wait in half.)

I hate that step. Let’s skip it.

Who needs a montage when you can indent a paragraph?

You grab your beer while I watch the clouds gather. I’m infatuated with the concrete, worried about the straps on my dress falling down. The sky has split, concern of burns obsolete in the wake of shy rain.

A handful of people cheer when my salvation comes onstage and you’d think I’d scream but my mouth’s too confused by Craig Finn and I existing in the same zip code.

The first song (“Constructive Summer”, an arguably perfect opener) sends the guitars flying. Suddenly, I’m nothing. I am warped into timbre, fluorescence, and pitch. I’m the cymbals; I am the picks. A body that used to be mine begins to dance, and my soul just stares.

The rain’s become bold. Fat drops splatter skin, smudge glasses. People wrap jackets around their heads but no one runs for cover. When you’re at a rock show, reality can wait.

This is the most intelligent noise. If only all my lobes were temporal! No one could understand this band until they heard it, like no one could love me until they cracked my head open and saw this idiot dreamer not only for who she is, but who she could be (if she was given the chance). I watch boys in the audience slurp their rain-diluted liquor and realize this is a generation of wasted (and sometimes realized) potential.

As I seizure in ecstasy, the crowds remain unmoved. You’d think I’d be scared to sing along because hardly anyone else is (most don’t know the band, some don’t know all the words) and Finn’s “singing” is almost impossible to keep up with. Even though he’s intentionally out of time, I belt it along with him. (So do you, which makes me love you more than I thought I could.)

When they play “Hurricane J,” I feel luckier than I’ve ever been. It was good enough hearing it during the sound check. Now my ears are truly spoiled. Every lyric throttles my throat, each of my itty-bitty billion neurons supersaturated in excellence. These are more than sing-a-long songs—they’re the crescendo to my life soundtrack.

I wouldn’t even know this band if it wasn’t for you. How wild is that?

I’m so aware of all the collagen in my skin. I spent most of my adolescence dwelling on the end only to learn I’m at the beginning. Now I will trust every chord—power or proper—to complete me.

I’m swimming in my shoes—not so much literally as hyperbole—but we’re drenched all the same, bliss-kissed rats showering on the edge of the world. I couldn’t have written the set-list better myself (except I would have swapped “Southtown Girls” for “Soft in the Center”).

If only everyone could feel it with me. The best concert is the kind where everyone in the crowd rides the exact same high, but tonight we’re on our own. Apart from a small pocket of fans to the left, we’re the only ones basking. The remaining show-goers stand—some patient, some less so—waiting for The Gaslight Anthem, the band they actually paid to see.

Don’t they know they’re witnessing an art that surpasses its own medium?

I couldn’t think of a better time to exist, regardless of all those sweat shops, slaughterhouses, and sunbathing polar bears I try to forget. I’d be happy to die all over again. I haven’t felt that since I saw Rancid, not with you, but with him.

I’m soaking wet; my dress is halfway off my shoulders (I knew that would happen!); I’m a poster-child for mess... and I couldn’t be happier. It’s only after we abandon the notion of perfection that we see it was there the entire time, hiding in our tangled hair.

We must let the music do the thinking.

In a few days we’ll slink on another plane and head “home” but the closest I’ve felt to “home” is going to shows like this. Anytime I’m massaged by the right riff, I can pretend the world’s right and I belong.

Finn’s performance is utterly hypomanic. You’re compelled to smile back even when he’s looking elsewhere. I know it’s wrong to idolize the front man and I should talk about Tad Kubler, Steve Selvidge, Galen Polivka, Bobby Drake—after all, it’s their combined chemistry that makes this drug so potent.

I know my own sentences can’t compare after listening to their lyrical Wonderland. Their songs are books with backbeats; their music is psychology in motion.

Fuck man, rub out my cells—my ears don’t deserve this symphonic genius. I could go on until my tonsils rot but in the end a page can’t capture brilliance.

I could keep the present tense and pretend I’m back at one of the best nights of my life, but those areas of my brain will never light up again. Memory isn’t enough.

I wish you could have been there! Not beside me, but inside my experience. If we’d been able to somehow transcend this stupid flesh, maybe I could have kept that connection.

That’s all the sound’s ever been about: I’m waiting for some outro to swoop down and save me from myself.

They exit stage right, chased away by applause that isn’t nearly loud enough. Into your arms I collapse, grinning like a Cheshire kitten.

All I can tell you is how happy I am, and all I know is that none of it will last.