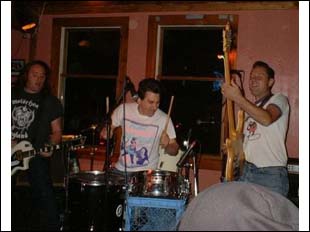 The Hilarity of Losing a Finger: A Column

Another so-called "year" ended, and another one safely under way. Do you ever get sick of people saying shit like, "Where does the time go?" or "I can't believe another year's gone already." Like it's something new or different. Like the previous forty-two years of their life took so much longer to live through. And now we're all compiling our lists of "favorite" songs of 2005, or "best shows," or "top CDs," or whatever, as if there's any significance to that particular twelve months. How about a list of the ten best CDs released between June 7, 2004 and June 6, 2005? Why isn't that just as interesting a topic? Having said that, here's a little something about my favorite song of 2005, "29 Fingers" by The Konks.

The Konks are a Boston based garage/punk band, for whatever that's worth. They consist of a guitar player named Bob who looks like he should be in a Motorhead cover band; a bass guitar player named Jon who looks like he might have worked as Fonzi's assistant down at the garage; and a drummer/singer named Kurt who looks like yer dad. The thing is, though, that Kurt doesn't play your typical drum kit. In fact, you wouldn't call it a "kit" at all. It's two drums, one of which may have been a snare, the other a smallish tom. He props them up on some old milk crates, center stage, right up front. He stands up while he plays 'em, and sings. He uses very heavy, very well-used looking drum sticks, and he beats the living shit out of those two drums. Meanwhile, the veins on his neck are looking like they're gonna burst from the pressure he's putting on his vocal chords.

All of which is well and good, but could be nothing but a gimmick if they didn't have any songs worth listening to. Which they do. In particular, I can't get enough of this one called "29 Fingers." The back story is that, apparently, guitarist Bob suffered a traumatic partial amputation of one of his fingers on a drunken Boston Harbor Booze Cruise, when the member of some other Beantown band slammed a door on it. As a result, the three members of The Konks now possess a total of 29 fingers. The opening verse of the song is:

To me, this is poetic genius. In the next verse, Kurt gives an equally poetic description of the band:

(For those of you unfamiliar with the Boston accent, the words "yeah" and "care" rhyme.)

Sung over a riff that is so primitive and raw that it makes "Louie Louie" sound like a symphony, this is some truly powerful stuff. There is nothing I want more out of my rock'n'roll than to have some fun, and The Konks deliver that by the truckload. Their CD is available through Bomp! Records, and anyone who claims to like garage and/or primitive punk needs to own it.