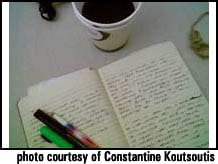 “The only thing I ever saw that came close to Objective Journalism was a closed-circuit TV setup that watched shoplifters in the General Store at Woody Creek, Colorado. […] With the possible exception of things like box scores, race results, and stock market tabulations, there is no such thing as Objective Journalism.”

Hunter S. Thompson wrote this in Fear and Loathing on the Campaign Trail ’72, his thoroughly amusing and insightful look into the U.S. presidential election of 1972. For those who don’t remember, that’s when Nixon was re-elected. Don’t worry though, the story ended sorta okay because then Watergate happened and Nixon got turned into a joke and then a MTX song. Thompson, the forefather of gonzo journalism and writing really good books about doing really good drugs, spent a year following the campaign as a member of the press corps (albeit a not-very-well-liked member of the corps who did things like accidentally give away his press pass to a drunk who assaulted one of the candidates, or swam during a hurricane in Florida and almost drown). And in this journey, he makes a keen observation; for all that politicians are lying thieves and unrepentant bastards, the press are no better; a motley collection divided equally between the major-name print ass-kissers who are so grateful to be given a shot on the campaign they wouldn’t ruffle feathers even if doing so cured cancer, and the burnt-out idealists who fight because they really don’t have anything else to do in life, like suicidal mercenaries in the Congo going from civil war to civil war.

They’re all guilty of a crime that, in both Thompson’s eyes as well as my own, isn’t so much a crime as it is a grossly misused tool, waved around like a sword in the hands of Ugg the Barbarian, when it should instead be loaded and wielded like a precision sniper rifle peeking through the jungle brush of Plei Me in 1965. And that, fair fellow men and women, is subjectivity: allowing for personal ideals and tastes to dictate what gets written and, in a way, swaying their (the writer’s) view of the truth. Your own opinions and feelings on a subject influencing the way you write about something, even when what you’re righting about is the absolute truth. Two plus two equals four, no matter how much makeup the number two wears, right?

Still, that’s not going to stop someone from, you know, claiming that two is actually a sellout and is working with Stevie Wonder, or that four is somehow going to endorse a Christian conservative candidate for the U.S. Senate. I know, shocking. There’s liberal and conservative bias in the media, stop the presses! Oh wait, they control the presses, so your pleas fall on deaf ears and potentially get you kidnapped and killed by the cabal of shadowy journalist-type ninjas out to keep the Truth from being discovered, or whatever movie plot I manage to think of and steal to use as a joke.

My question; is it really that bad? I mean, without a doubt something like the pandering and jingoistic parody of the news that something like NewsCorp’s Fox News Network is blatantly right-slanting (in a political standing of course, since I’m not really privy to something so personal as to which direction the collective peni of Fox News anchors and “reporters” turn). However, are we in the independent, DIY-driven punk rock community any different? I mean, at the basest level, myself writing here or for a webzine I write for sometimes called Late Night Wallflower, isn’t really that much different from someone like say, John King, a political reporter for CNN who’s probably got more years and experience in the professional journalism field than I could ever hope to accumulate, even if I was intent on reaching that sort of level in life. Oddly enough, as I write this I have a piece he contributed to on the CNN website about the resignation of Trent Lott up on my browser. Not that I’m just drawing a name at random off of my computer, mind you. I was a weird kid. I actually did stuff like read the paper and watch CNN when I was younger. I had a lot of free time.

I mean, think about it. In the face of what is seen as a faceless and strictly money-making machine (the mainstream entertainment industry) we turn inward and create something wholly new and utterly subjective, crafted from everything we love to stand against everything we hate. We sing about what we want, we play shows and go to shows with our friends, and when we form our own journalistic networks focusing on the music and the message, we basically write about the same things: our friends, our ideas and personal beliefs, our opinions.

Everyone and anyone, myself included, who has ever put pen to paper or banged out something on a keyboard (as I find myself doing right now) is guilty. Do we, as zine writers and bloggers and guerilla media hounds, write about things we don’t like? Well, sure we do. We just make it clear we don’t like it. We’ve all read record reviews and sometimes, they’re the best part of any magazine, just seeing how many ways there are for someone with too much beer in their system and a blaring stereo can degrade a terrible rock band in fifty words or less. Maybe I’m just imagining it but I’ve never seen, in reading issues of Razorcake, MRR, Punk Planet, or the other myriad of zines and websites I spend a lot of time on, pieces on anything that would be coverage of GOP committee meetings on stem cell research, or coverage of local airshows. I mean, have YOU ever seen anything like that being covered in DIY/punk and indie writings and publications*?  Not unless it’s of course, working with clear political (usually liberal) slants**.

And when we do like it, we’re not ashamed of our favoring of it. As I’ve gotten older and decided to try my own hand at writing and publishing and something akin to zine writing, I’ve stuck to not only what I know but also what I like. It seems pretty simple but as advice in a recent issue of Razorcake has demonstrated, making a good zine and not just a photocopied booklet filled with pages of you crying about girls who won’t go out with you, cleaning your bike chain, or the state of the recycling industry in the U.S. is no mean feat. You don’t want to get bogged down by the things you see around you that you think you have to write about or are supposed to cover

I’ve written kind of extensively about local folk punk heroes The New Dress and, over the course of interviewing them, buying their stuff, and seeing them live a total of eight times so far (twice within the span of a month or so, I think) come to think of them as friends. The two of them are great musicians and great people. Will that influence me as I continue to be fans of them and cover them in the future?

You bet your ass. Anyone who says that their subjects’ behavior, be they political beat-coverers or some kid interviewing his favorite band for something he and his friends are cranking out of a copy machine in Kinko’s is a goddamn liar, and probably a terrorist, too (while I’m throwing out accusations, I may as well go with the big ones, right?).

Conversely, I won’t cover what I don’t want to. I won’t go see bands and review their shows if I don’t like them, I won’t write about books that I dislike, nor will I voice my love of people in public spotlights (I’m hesitating to use the word “celebrity” because, let’s face it, as much as I like someone like author Joe Meno, he’s not exactly a “celebrity” in the sense of the word as it’s used these days… and praise Allah for that!).

That’s not to say that I wouldn’t ever write about things that I am not for or am not celebrating. One of the more recent little pieces I did was a report for Late Night Wallflower about the sentencing of Jeanette Sliwinski, who in 2005 in an attempt to kill herself, crashed her car into another car at a red light, killing all three other occupants of the other car, including Michael Dahlquist of the band Silkworm. It’s a terribly sad story so far and a tragedy that no one should have to live through (Dahlquist’s family) and has garnered a bit of press for what’s probably the fact that Sliwinski was a lingerie model. Titillating, right? I know, I can barely contain myself either. And who wants to be a bearer of bad news? Who wants to have to write that this woman who, through sheer fucking stupidity, killed three guys that night for no real reason, and is now only going to be sentenced to eight years in prison?

Not me. But it was there, and I honestly feel strongly enough about it that I decided to do something and write about it. Because that’s what I do, that’s what anyone with a pen or a keyboard and half a brain will do when they’ve decided to write and report—put their hearts into something they believe in.

It’s what makes it all good, what gives quality writings their taste of authenticity. The knowledge that the person who is behind the words, be they in a fictional or journalistic, genuinely believes what they’re writing and wants you to believe and care about it as well. It’s an honesty that drew us to punk rock in the first place, an honesty that drew us to no-holds-barred thrash and destroy mentalities that have created a vibrant network of words and music across the continental U.S. and the world beyond. But even beyond that, it’s the honesty that drew me into writing. Into storytelling and zines and caring enough as a kid to read the newspaper to find out what was going on because I knew someone out there cared enough to write about it and I wanted to share in that.

So celebrate the death of strictly objective journalism and writing with me. Embrace the spin and use it to let people know just what you think about something. Never forget the truth, but also remember that the truth is nothing but a sports score or a date of release until there’s a human element telling it. Even if that human element is just trying to find out what your favorite Bikini Kill song is.

Send tributes of cookies, beer, and cheese to costakout (at) gmail (dot) com.

*) If anyone is willing to prove me wrong, lemme know. I have no real pride so it’s not like it’s gonna hurt me or anything.

**) Please keep in mind I don’t care about that. I’m such a bleeding-heart flag-burner sometimes I’m a little surprised I haven’t been beaten on the street by nightstick-wielding riot cops under the pretense of a jaywalking violation. Not that I have some sort of inflated sense of self-importance…I just hate cops and conservatives with a vitriolic passion that makes your average hippie look like Tucker Carlson.