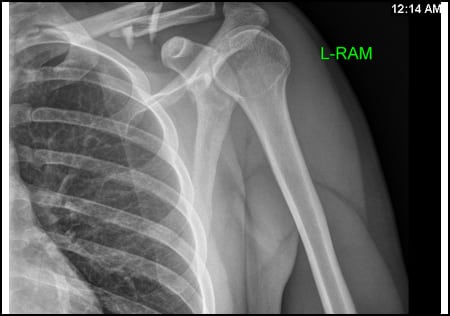 The Gentleman Jackalope: I Broke My Clavicle; or, How I Spent My Summer “Vacation”

It took twenty-six years with a number of falls, accidents, bails, and garden-variety stupidity to finally happen. I broke a bone at last. It just wasn’t how I expected it to happen.

I’ve face-planted against the ocean floor, imitated Jackass stunts, and had an asshole in a Chevy Silverado turn a blind left in front of me while I drove a Geo Metro at about forty miles an hour into him. Every time, I walked away like the cheerleader from the TV show Heroes… Then, on my way home from work, a fluke incident involving my chain popping off my back wheel caused me to fall over my handlebars. I landed on my elbow. The pressure went from the bone joint, up my humerus, and culminated in snapping my clavicle.

Needless to say, I was granted some injury-related time off to recover. Ten weeks, to be exact. Just in time for summer, too! Here are the random musings of a guy who spent way too much damn time cooped up in an apartment with nothing to do but heal and drink beer.

1.) This was my first extended time off in almost two years, not counting the two weeks I had while I moved from Portland and settled in. The time off was great, at first. I had time for leisure activities like long-sittings reading, using my good hand to write out story ideas, and training my puppy. However, I was surprised by how quickly I found myself missing having a job to go to. Especially since I spent most of my time outside of work dreading my next shift.

2.) Once I got bored enough, I started working through series movies, TV shows, and books. I sat through things like the Star Wars saga in linear order. (It’s funny that watching the Star Wars saga must always be explained by what order you went in.) The highlight was enjoying the 1,000 page epic graphic novel storyline Cerebus: Church & State (Vols. 1 and 2) by Dave Sim and Gerhard. If you’re a comics geek and a fan of self-publishing, Dave Sim and Gerhard’s Cerebus is for you. Cerebuswas self-published by Sim (who created Aardvark-Vanaheim Publishing), and used the popularity of the series to preach the freedoms that come with working outside of large publishers. The series has 300 issues, is about 6,000 pages, and took twenty-six years to produce. (Take that, Proust!)

3a.) The largest block of watching/reading I took on, however, was the Batman media marathon I went through in the lead-up to the premiere of The Dark Knight Rises. I re-read Grant Morrison’s run writing the Batman comic book series. It’s one of the best runs on Batman I’ve ever read. It weaves an idea that while the cape and cowl is a symbol for justice, Bruce Wayne is the one, true Batman. He believes that Bruce is what Nietzsche would call the übermensch. Grant Morrison is deliberate every step of the way. (Would you expect less when one of his creative influences is Thomas Pynchon?) What seems like meaningless details and story filler come back in different storylines and prove to be crucial. Sometimes, it’s obvious, like the unfortunate name of Bruce’s girlfriend. Other times, it’s not so obvious. In the first book, Batman and Son, seen in the backgrounds of panels, there is bright graffiti of a word that makes no sense that becomes the plot twist in the third book, Batman R.I.P. The book reading order was Batman and Son, The Black Glove, Batman R.I.P. Final Crisis (which is a Justice League graphic novel, but is integral to the Bat storyline), and the first three Batman and Robin titles, Batman Reborn, Batman vs. Robin, and Batman and Robin Must Die.

3b.) With the movies, I started with the Adam West/Burt Ward Batman: The Movie (1966). You know, the one with Bat-Shark Repellant Spray and the scene when Batman runs around a pier trying to get rid of a bomb. The Tim Burton Batman movies still hold up, while the only good thing that came out of either of Joel Schumacher’s movies was Jim Carrey’s performance of The Riddler. I followed up those movies with the recent ones directed by Christopher Nolan. They are, by far, my favorite interpretations of the Batman universe. His treatment of the villains is living proof as to why Batman has the best rogues gallery. They are deep characters, and each one is a psychological and philosophical foil in some way to the Dark Knight. They put the mirror to Batman and reveal that Bruce Wayne has always been one or two moral decisions from being a villain himself. I’ll stop there, because I could write a dissertation on the psychology and philosophy layered underneath this particular comic book superhero.

4.) There are some songs that deserve to be listened to through headphones. Even if you’re at home alone. One that comes to mind is “Curtain Call” by The Damned from The Black Album (1980). It’s a seventeen-minute long epic that sounds like Pink Floyd if they gave into gothic, punk influences.

5.) “Frankie Teardrop” by Suicide from Suicide(1977) should be heard through headphones, but only once in your life. It will rattle every fiber of the soul inside of you. Have a loved one close by to hug after listening.

6.) After watching almost every minute of action from the Euro 2012 soccer tournament, I wondered why North and South America don’t compete in a similar tournament every four years. Currently, they are in separately governed soccer confederations, and each confederation has their own tournament. In North America, it usually comes down to the United States, Mexico, and sometimes Jamaica, while in South America it’s always Brazil, Argentina, or Uruguay.

Placing those six teams in a tournament would make a championship with many more hard-fought and meaningful games. I’m also a believer that the quality of opponents eventually raises the quality of other teams. It works three ways; the obvious being that preparation to defeat the likes of Brazil and Uruguay requires a higher standard of talent, fitness, and even luck. Meanwhile, revenue gained by the smaller countries selling out stadiums for those teams will create better funding for developing better players.

After a few tournaments, dark horse teams will emerge as threats to the supreme teams. Finally, the exposure of little-known, good players playing against good teams will grant them the opportunity to find spots on professional teams in good leagues. Imagine the heightened learning curve an island kid representing Trinidad and Tobago would get if an MLS team, impressed by his performance in the tournament, decided to give him a shot.

7.) I’m not a luddite by any means. For the most part, I embrace new technologies. If I don’t, I at least understand its merit. I don’t have a Facebook, Twitter, or Instagram but I get why so many people do. That being said, I’ve started to fear recent technological advances. There are two TV commercials that have brought this fear to life.

The first is one by Time Warner Cable, offering their IntelligentHome technology. At first, it sounds like a great idea. A security system is installed complete with a door beeper and cameras. Several devices in your home are connected to a network that you can control from mobile devices like a smartphone or tablet. Set your thermostat, activate your security system, and turn on your lights before walking in the house from one of these devices.

However, the commercial shows a professional woman leaving her office, walking down a hall with some assistants, and entering a conference room for a meeting. In that short span, she sets the temperature in the house, reactivates the security when her daughter is home from school, and then spends the rest of the ad watching the kid make spaghetti. There’s something very Big Brother going on there… The scary part is that it’s being advertised as something you should want to do.

The second commercial is for the Apple iPhone 4S, and features Martin Scorcese. He sits in a New York taxi, talking to the voice-activation function known as Siri. First, let’s get beyond the ironic part where Marty is having an actual conversation with the artificially intelligent cellular phone in his hand, while ignoring the human cab driver. The scary part is when Scorcese looks out his window and asks, “Is that Rick?” He then asks Siri, “Where’s Rick?” The phone then places a dot on a Google map, marking Rick’s location and Scorcese shakes his head, “That’s not Rick.”

So, now we’re being sold the idea that technology should watch our homes, even when we’re in it, and it should monitor our whereabouts when we’re not home. This is a fodder of dystopian fiction.

8.) Why does the NBA have thirty teams when only small group have won the championship? For starters, the Los Angeles Lakers and Boston Celtics have thirty-three of the NBA’s sixty-two championships. Seventeen teams share the other twenty-nine championships, and the Syracuse Nationals don’t even exist anymore. Two of those teams have since moved cities and changed names. (My apologies to Rochester Royals and Seattle Supersonics fans.)

Since 1979, the Lakers (ten), Chicago Bulls (six), Celtics (four), San Antonio Spurs (four), Detroit Pistons (three), Houston Rockets (two), Miami Heat (two), Philadelphia 76ers, and Dallas Mavericks have won it all. Nine teams with thirty-two championships, twenty-one teams with zero. During that time, the runner-up in nineteen of the championships was one of those nine champion teams. Throw in all of the conspiracy theories involving questionable referees and it looks a lot like the NBA swindles over two-thirds of its fan base into pouring hard-earned dollars into a poor product.

…God damn, I had way too much time off.

“People think it’s an obsession. A compulsion. As if there were an irresistible impulse to act. It’s never been like that. I chose this life. I know what I’m doing. And on any given day, I could stop doing it. Today, however, isn’t that day. And tomorrow won’t be either.” –Batman, Infinite Crisis
<!--[if !supportLineBreakNewLine]-->
<!--[endif]-->