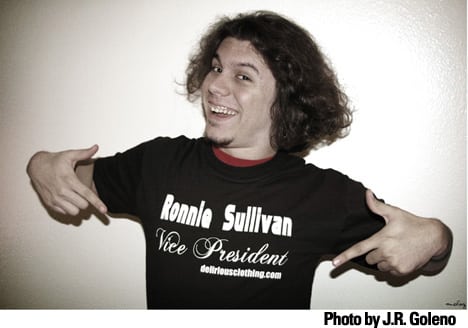 The Gentleman Jackalope: “I Approve This Column”

Thanks to whatever that this year’s political season is over.

Political campaigns try to sell me the idea that one sharply dressed, middle-aged person is more in touch with my needs than their sharply dressed, middle-aged opponent. They stand on soapboxes and try to convince us that despite things like overspending borrowed money and remaining split on every major topic, they will help lead America into a bright future. Their constant media presence creates street teams for political opinion. They stand in public areas, debating with their like-minded friends about how that candidate’s foreign policy will weaken our military power, or how this proposition must pass because schools will receive money from higher corporation taxes. This happens on a loop even more endless than the news cycle, because I can’t choose to turn it all off.

It also reminds me of a failed campaign I had during a short foray into politics.

I went to CSU Channel Islands, the newest CaliforniaStateUniversity. It’s so new that my first year was the school’s second year ever. Individuals unafraid to take the raw potential and do something with it were molding the university. I got a foothold in my second year when a series of events left the Student Government Senate with only one senator. The president, a friend of my then-girlfriend, called me and offered a Senate seat. I accepted, and without ever running for office, I assumed an elected position. (Here is where one might add something like “God bless America.”)

The position was unpaid. In an effort to help the organization any way I could, I became the only senator working more than the required three office hours. Then, at the end of the semester, the vice president was offered a paid internship with Amgen, a pharmaceutical company in NewburyPark. She stepped down and I was the only Senator nominated to replace her.

The position was paid, and being Vice President of Student Government became my job. From nobody to second-in-command in four months is a meteoric rise. The more people recognized my reputation as a political powerhouse, the more I drank the Kool-Aid. What I didn’t know then was that the more invested I became, the more I resembled a subject from Philip Zimbardo’s Stanford Prison Experiment—put a shirt and tie on me and soon I’ll start believing I’m Patrick Bateman from American Psycho.

Two months into the new semester, I decided to run for president. The president, who had become a good friend of mine, advised me that our work was important. She said that if I didn’t run, we ran the risk of losing what we worked for. It sounds melodramatic, like she dry-heaved weak words on some deathbed. In reality, this conversation happened around nine o’clock at night, while we were still in the office.

When I decided to run for president, I kept my cards close to the chest for a month. I only confided in people who had no relation to my campus. The statewide board I sat on, the California State Student Association (CSSA), was comprised of students who, at some point, went through what I was planning. I started asking questions, gathering information, stealing already-stolen ideas, and making contacts.

The frightening thing about talking campaigns with political people is that you learn that their ideas only go as far as the next campaign. They may have long-term ideas, but the time guaranteed only goes until the next election. Anything that happens after that might be credited to another administration. While these types think about their next campaign, they often find themselves prepping to fight an unrevealed opponent. This means thinking of the campaign in terms of the self. “Vote for me, here’s why…” more than “Don’t vote for them because…”

Those people provided a wellspring of ideas for my own campaign. However, as word spread through CSSA, I started receiving unsolicited advice. Another thing that political people like to do is create factions. The members of this board, aware that my shots of winning the presidency were high, started grooming me for future partnerships.

The president from CSUMontereyBay noticed me putting away iPod headphones one morning and said, “You shouldn’t walk around campus listening to an iPod. It makes you look unapproachable.”

The vice president from HumboldtState said, after acknowledging my CSU Channel Islands T-shirt, “Make shirts and have your friends wear them during the campaign. It’s free advertising on moving billboards.”

A representative from CSU Stanislaus showed me her campaign flyer and said, “Don’t go with the school’s colors. Everyone does that. If you choose something else, you’ll stand out.”

I returned home, ready to fill out my application for the ballot when one of the senators, let’s call her Jen, approached me. Jen looked around the room to make sure we were alone, and in her soft voice said, “I want to be president. I want you to be my vice president.”

I smirked, “I’m running for president, too.”

Jen was an attractive girl, with an innocent girl-next-door smile. She made a face I can see being used for a raise or getting out of a traffic ticket. In her soft voice, she said, “I know. I thought that since next year is my last and you’ll still have one more year, we could work together. It looks like we’d run unopposed. That way, we’ll have three years from the same group.”

It was a shady deal. The two of us were drunk off the Kool-Aid though, and I agreed.

I’m convinced now that Jen took advice from Teddy Roosevelt: Speak softly, but carry a big stick. A day after I turned in my application to run for vice president, Jen revealed another senator, let’s call her Maria, to be the candidate she would back for vice president. In one fell swoop, I found myself in a campaign.

The university had weird rules about campaigning. To start, we weren’t allowed to use our current titles. It was an attempt to level the playing field. On the other hand, how many jobs does one apply for where they are forbidden from describing their experience? Another weird rule was that campaigning was only legal for one week, leading up to the two voting days.

On the Monday of campaigning, at eight in the morning, I rolled out my eight-day plan. I had my Photoshop-savvy roommate create a large color poster, twenty-something letter-sized posters and hand fliers to put around campus. I worked out a deal for cheap T-shirts that said, “Ronnie Sullivan – Vice President” in exchange for putting the company’s website on it too. My friends all wore them to class that day. I wandered campus all day, shaking hands. There were no babies to kiss.

On the Tuesday of campaigning, at eight-fifteen in the morning, I received a call on my way to campus. The administrator in charge of elections received formal complaints from Jen and Maria about the T-shirts. The administrator said, “They said it only says ‘Ronnie Sullivan, Vice President.’ They claim in infers that you’re already vice president.”

“I am already vice president,” I replied.

“Right. But the rules say you can’t use your current position in your campaign.”

“Is there anything that we can do?”

“Nope. The Elections Committee decided to ban the shirts due to the reading.”

It’s not in my personality to take my anger and swallow it, or go off and do something like fire handguns at a shooting range. I’m ornery. When I had the chance to escape campus for an hour, I went and bought a pack of “Hi, My Name Is” stickers. I took a large Sharpie and wrote the word “Vote for” on every one of them. By the end of the day, my friends were back to walking around campus with the shirts. This time, with a ghetto powder blue and white sticker centered below the collar, my shirts read, “Vote for Ronnie Sullivan – Vice President.”

I received another phone call from the administrator on campus the next day. She said, “The Elections Committee banned the shirts. If your supporters don’t stop wearing them, we’ll have to disqualify you.”

I shook my head, “The committee only banned the shirts because of how they read. I put a sticker on each shirt that says ‘Vote for.’” They’re legal now.”

“I’ll have to check with the Elections Committee. Until then, the shirts are still banned and can’t be worn.” I neglected to tell my supporters, and they wore the shirts anyway.

Another phone call, later that evening: “The Elections Committee has ruled that the shirts are now acceptable.”

I wanted to answer in a number of snarky ways, but I smiled and said, “Thank you.”

On Thursday, I wore my shirt and spent the majority of my day explaining why my shirt had the sticker on it. When I wasn’t being asked, I found people at least looking. There is no such thing as bad publicity.

By Friday night, I was exhausted from the bullshit of campaigning. Over the weekend, I laid low and thought about my future. For the first time in a while, I recognized how unhappy I really was. In just a few months of political work, the only bright spots stringing my life together in a black hole were the little victories.

By Monday morning, I was split in two. The politician in me pleaded for me to stay. He compromised that I should at least win the election to prove I could. The other part of me wanted to drop out. I knew I was going to win; sticking around and screwing over an organization for an ego boost was just overkill.

As I waffled my political future on the drive to campus, At the Drive-In’s “Arcarsenal” came on. It wasn’t a great epiphany moment. It’s just a good song that I love singing alone in a car, while I try to match the energy exerted by singer Cedric Bixler-Zavala. By the end of the song, my throat was a little raw and I felt the blood coursing through my veins. I was still alive and the black hole of politics was literally sucking the life from me. The beating heart inside took over the brain’s decision making, and by the time I’d reached campus, I’d already called in and withdrew my name from the ballot.

I wasn’t disappointed. I walked the campus, removing all of my propaganda. When I slipped it all into the recycling, I felt the political demon inside of me go with them. I voted the next day, and when the results arrived, everything was in its right place. The unopposed candidates were all declared winners.

It’s been several years since I cancelled my political career. I have no regrets. During that time in life, everybody talks about building up contacts and snatching up opportunities and running with them until the end. The idea of doing what you want to do, even if it doesn’t make money, flies out the window. I decided to go against the grain, and focus on doing what I wanted. It wasn’t a popular decision, but I wasn’t making it for other people.

A month after my term as vice president ended, the editor of the school’s yearbook approached me to help edit. The next year, I became the Editor-in-Chief of the school’s newspaper. I took the opportunity to the end, and worked with the local newspaper’s sports section until the economy shit out. Nowadays, I write columns for Razorcake. That sounds much better than living life from campaign to campaign.

“What’s this guy running for? President of being on every channel all the time?”
–Leslie Knope, Parks and Recreation