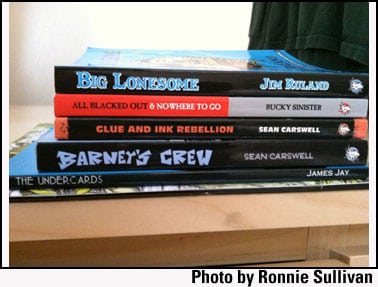 Think about this: Razorcake/Gorsky is now ten years old. That’s a fifth grader. One can debate whether or not they would’ve skipped a grade with such an amazing collection of brainpower, but I think the disciplinary record of a ten-year-old Razorcake would balance everything out.
This grade school analogy doesn’t really do Razorcake justice. Ten years in, Razorcake’s fanzine and website operations are a bastion for fresh, unsolicited music spanning numerous genres. Both are also champions of excellent writing on subjects that aren’t necessarily about music. Beyond the words and illustrations is a wonderful community of people who give a shit about contributing to society positively through art. That sounds a little too mature for ten-year-old children.
Not to be forgotten is Gorsky Press, the book-publishing arm of Razorcake. Six years ago, I accidentally stumbled upon Gorsky Press with Barney’s Crew by Sean Carswell, and I haven’t looked back. The novels, short stories, poems, essays, interviews, three-panel comics and manifestos that make up the catalog are fearless. In honor of Razorcake/Gorsky’s ten years, I present a few of my favorites.

“The Fiction of Old Friends” – Sean Carswell (Glue and Ink Rebellion)
Carswell writes a short, creative nonfiction about meeting an old friend in Miami. He hasn’t seen this friend in years and he harbors a little anxiety. The two of them were young, drunken troublemakers before. In the present, time has matured Carswell’s persona. His only image of his friend is the hooligan he used to run around with. Of course, time also matured his friend. It ended up being a subdued evening, drinking Pabsts and shooting the shit on a porch.
Beyond the details, Carswell examines how we take the reality of situations and mold them differently in our minds, omitting details to create meaning. One of the results is that the characters in our lives remain static. Like characters in books, they can read the same every time you revisit them. There is a constant blend of fiction and nonfiction in our lives and in what we read because our minds reconstruct it all to make sense of the chaos of reality. It sounds more complicated because it’s condensed. Read the story, and it’ll make more sense.
I’ve been thinking more about this story since I’ve moved back to California. There were many people who continued their dynamic lives here, while remaining static characters with me in Portland. While rewriting the fiction of old friends, I’ve noticed that my friends kept a fictional version of me with them as well. As we talk more, the former versions are fading away. When I explain the time I spent in Portland to them, I often find myself trying to string together storylines in order to produce greater meaning. It’s safe to say that when two years of life in a different region of the United States are boiled down to a short conversation, some details are omitted.
The rest of A Glue and Ink Rebellion is really good, as well. I recommend the preface to any writer who needs to see what being confident in one’s writing looks like. This book has flying poop, snapshots of the exodus of Atlanta’s lower class prior to the 1996 Summer Olympics, cultural comparisons of the galaxy in Star Wars Episode I: The Phantom Menace and the modern United States plus much more.
Also, if you’re a fan of Carswell’s latest, Train Wreck Girl, the story “My Broke and Homeless Ass” is a lost section, detailing Bart’s date with the Jesus girl in the chapter “Pink Speedo Lambada.”

“On Shakespeare” and “June” – James Jay (The Undercards)
James Jay’s The Undercards taught me that I didn’t have to imitate Shakespeare or Victorian era British poets to write good poetry. Those are common misconceptions taught to us in school… when those are the only poems presented to us.
“June” is one of the few poems that I keep with me at all times. It’s easy to do, seeing that it’s two lines. “The awful silliness of sprinklers / spit spit spit spit.” I grew up in the high desert of the Antelope Valley. Much like the desert terrain of Jay’s Arizona, it’s fucking hot in June. I remember many hot days playing in sprinklers. I also remember noting how much the spitting sprinkler sucked for this recreational activity.
“On Shakespeare” touches multiple layers for me. For one, I studied English in college and had to take a course on Shakespeare’s plays. I recited pieces of this poem to myself in class when the instructor would talk to us about the common themes in the histories, comedies, or tragedies.
Around that same time, I started dating a former girlfriend also taking the Shakespeare class. Well, it was more of a relapse—whatever—it was complicated in ways that only twenty-year-olds studying Shakespeare make them. Then, during spring break, she studied abroad for a week in Mexico rescuing a mangrove forest and sleeping with a classmate. Needless to say, that helped make things far less complicated when I severed our ties altogether.
As an adapted-for-gender version of “On Shakespeare” would say:
“Romances: this guy
fell in love with a girl.
Turned out to be
the wrong girl.”

“Kessler Has No Lucky Pants” – Jim Ruland (Big Lonesome)
I’m a writer, as can be seen. As a creative writer and an avid reader, I enjoy the risks that writers take—like when they write something that breaks the typical mold of a story, whether that be storytelling in a non-linear fashion or experimentations with the narrative. Ruland’s “Kessler Has No Lucky Pants” is written as the transcript of an interview between an ever-curious interviewer and an all-knowing subject.
It starts as a harmless explanation of the nine pants Kessler owns, then it zeroes in on a specific pair of Navy pants Kessler purchased at a thrift store. It’s really a story about how unlucky Kessler (not just the pants) is, until he receives some luck underneath the Santa Monica Pier at the end.
At one point, the interviewer asks, “What is so special about pants?” To which the subject answers, “Nothing. The pants are a convenient metaphor. Luck, however, is real and should not be discounted.” It’s funny how the ethereal idea of luck is what is real when compared to the pants. However, I know that I’m superstitious enough to agree. I’ve tied bad fortune to the inanimate objects that surround me.
Before my wife and I got married, I owned a Dodgers T-shirt with James Loney’s name and number on the back. In my laundry rotation, I wore it roughly every two weeks. Without fail, the two of us would get into a fight whenever I wore this T-shirt. After this happened for the fourth consecutive time, I peeled the shirt off my back and hurled it into the nearest trashcan. After that, we stopped fighting every two weeks.
This story has also deterred me from buying pants in thrift stores.

“The Other Universe of Bruce Wayne” and “The House That Punk Built” – Bucky Sinister (Whiskey and Robots)
You know that thing that people do when they describe an event about themselves and mask it as a story about their “friend?” Bruce Wayne does that.
Sinister makes you read between the lines to find that this poem is a candid self-reflection of his rock bottom. What makes it even more haunting is that Sinister’s persona in this poem is the alternate universe version of himself: a successful person with his shit together.
I remember this one to keep myself humble. I try to remain aware of the many different universes where I exist in different ways. In one, I’m sitting in a trailer somewhere in the Antelope Valley, dividing my attention equally between methamphetamines and bottles of liquor. In another, I’m sitting in a personal office, clicking keyboard keys for my next successful novel. Psychologists believe that these possible selves serve as motivational tools to work toward what Carl Rogers called the “ideal self.” Like Sinister’s persona, the ideal self is the person you see yourself being in a perfect world, where everything went your way.
Sinister reveals that he did eventually get sober. The poem “The House That Punk Built” is a powerful finale where he talks about the death of one of his friends, and his struggle with sobriety. They fuse together in the most haunting, and honest lines in the entire book, “I miss you like whiskey.” Suggested reading, definitely.

“Framing Invasion” – Sean Carswell (Barney’s Crew)
The first line of this story should be enough of a hook to get you to the end. Trust me.
“Framing Invasion” follows a crew led by Barney. It’s where the title of the book comes from. In the story, Carswell’s persona (also named Sean) finds self-importance through the crew of carpenters he works with. His self-meaning comes from his respect for Barney, and how he works hard so as to not let Barney down. The crew is like a family, taking in everyone’s good and bad, and sticking together anyway. I’ve been told that true friends are not the people who eventually bail you out of jail. True friends are the idiots stuck in there with you. The crew fits that mold. It’s that sense of community, where one contributes because one wants to contribute. Much like the community that surrounds Razorcake/Gorsky.

“I may be ten-years-old, but I still know what’s up.
I wear my Cramps shirt almost every single day.”
A.F.I. – “I Wanna Mohawk (But Mom Won’t Let Me Get One)”