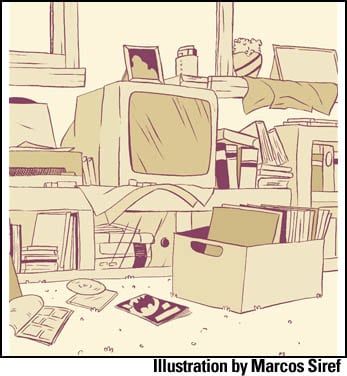 There are moments that stick to the conscious memory like white on rice (or brown, if you’re health conscious). They often contain significance because there was a life-altering revelation, a first experience, or simply because the event became a visible thread in the storyline of life.
Five years ago, I drove home from work. I turned right onto the street outside of my Oxnard apartment. I was listening to “Draw Japan” by The Horrors when I saw my cell phone light up on the passenger seat. I didn’t feel any urgency to answer it because my roommate had this terrible habit of calling me if I was even ten minutes late getting home. I killed the engine, unplugged my iPod, and grabbed the phone. It continued to vibrate in my hand as I read the name on the caller ID. My heart sank because it was a phone call I was expecting but never wanted to receive.
When I answered, I waited for my stepmother to start talking. Instead, I heard deafening silence in the background. She sighed and told me that my father was gone. After a brief, but painful struggle with pancreatic cancer, he died in his sleep. It was probably the most inappropriate thing to say, but I replied, “That’s good.”
I was pleased that he went in his sleep. In the waning days, all he wanted was to go in his sleep and to have his cremated remains released into the Pacific Ocean.
My stepmother could barely finish her next sentence through the sobs, “Could you call your brother? I can’t make this call again.” I agreed and said, “Good night.”
After that, I sat in the car in silence until my roommate called.

It’s been half a decade since my father passed away. His death brought mixed feelings. Without question, I love my father. However, in the years after my parents divorced, events caused rifts in our relationship that made the last few years tumultuous at best. I could write a book trying to analyze the shitty things we each did that created the valley that separated us. The funny thing is that in death, I realized how much none of that matters. While he lived, I simmered in my rage at his actions. Now, I tend to reflect on the good things.
Much like the moment I learned he died, I have several memories that will keep him with me forever.

When I was four, I soaked in a bathtub mixed with Aveeno oatmeal treatment. For the better part of a week, I did everything I could to try and forget that I had chicken pox. Toys didn’t help and staring at the television only allowed my subconscious to scratch at my bumps without me realizing.
Like an executive decision, I heard my dad tell my mom, “The boy needs a Nintendo.”
We lived five minutes from a K-Mart. It wasn’t an hour before he had purchased one and set it up in the living room. It was exactly what I needed. Focusing on the ducks in Duck Hunt made everything a little bit better. Calamine lotion helped, too.
Of course, under the surface of this event was my dad’s desire to own a Nintendo. He loved technology. In my lifetime, it started with the Nintendo. The mid-‘90s brought us a personal computer operated by Windows 95. He met my stepmother in an America Online chat room before I knew online dating existed. In 2004, when Google quietly announced they were getting into the e-mail game, my dad became a beta tester because of his high activity rate as a blogger. He died before the iPhone released in 2007, but I know he would’ve jumped at the opportunity to have a supercomputer that fit inside his pocket. If he were alive today, I’m sure he would be one of those guys who text messages me YouTube videos in the middle of the night, keeps in contact via Skype, and receives the RSS updates to the Razorcake website so he could link my column immediately in a tweet.

My father and music seem to go almost hand-in-hand. I know it’s cliché, but my dad used to wake members of the family on their birthdays by blasting “Birthday” by the Beatles. The radio station that I remember dominating the car when my dad drove was 95.5 KLOS from Los Angeles. I might be of a select minority of children at that time who heard “In-A-Gadda-Da-Vida” by Iron Butterfly before Bart Simpson made the church congregation sing it as the hymn “In the Garden of Eden” by I. Ron Butterfly. (My dad tastefully pointed out that long songs like that and Pink Floyd’s “Echoes” played because the DJ probably needed to take a shit.)
When I was eight, I took a particular liking to “Shout” by Tears For Fears. I always demanded that the volume go up for that song. After the third or fourth time I made this request, my dad went home and made me a tape of Tears For Fears hits from his CD collection. I can’t listen to a song by Tears For Fears now and not think of my very first mix tape.
He did something similar two years later when I really wanted Mellon Collie and the Infinite Sadness by the Smashing Pumpkins. After discovering that two-CD collections weren’t released on tape, he borrowed the CDs from a neighbor and taped them on two sixty-minute blanks for me. As a consolation for not having the liner notes and the awesome booklet of lyrics, he purchased Siamese Dream. All three tapes were given to me on my birthday a few weeks later.
After my parents divorced, my dad left behind a collection of boxes with his stuff in it. After a few years, my mom told him she was going to throw them out if he didn’t want any of it. He told me she could toss it all. Before telling her the verdict, I rummaged through them to see if there was anything cool. The only thing I saved was his small vinyl collection from before he started dating my mom. At the time, when I was fourteen, I didn’t realize the gold I discovered. As a younger man living in Los Angeles, my dad bought records like First Issue by Public Image, Ltd., My War by Black Flag, The Idiot by Iggy Pop, and Autobahn by Kraftwerk. In retrospect, it wasn’t a bad start to a vinyl collection.

On nights when my mom worked the night shift, my dad was in charge of all of the fun that comes with taking care of two young boys. I can’t really recall how old I was, but over a series of nights, my dad told us the story of J.R.R. Tolkien’s The Hobbit as bedtime stories. When I became the voracious reader of the family, he admitted to me that those stories were based on the famous fantasy novel.
As a sixth-grader taking part in a school-wide reading initiative where points were earned based on the difficulty of books, I found The Hobbit in the library. It fulfilled half of the points I needed for the trimester, and I finished in a week. When I visited my dad next at his apartment, we talked about The Lord of the Rings series at length while my brother slept and he drank beer. The next visit, he gave me a box set containing The Lord of the Rings trilogy and The Hobbit.
I still have those books. I’m not very big into science fiction novels, but those four books introduced my imagination to what storytelling could be. It also opened the floodgates to becoming a shameless nerd of the Star Wars saga, Final Fantasy video games, and anything associated with Batman. Thanks, Dad!

The last memory I have of my father alive is probably the most precious to me. His final weeks were spent in the condo he and my stepmother rented in Vancouver, Washington. When I got word of his cancer, I called in favors to cover my half of the rent that month so that I could buy Greyhound tickets for my brother and me. Before departing, I called my dad to check in. At the end of the conversation he said, “I know I haven’t been the best dad… If you have anything on your chest, this trip would be the time to let it go.”
I said before that our final years were tumultuous. My brother and I rode the Dog for twenty-six hours. I spent the time thinking out everything and rehearsing what I wanted to say. The speech escaped me the moment I laid eyes on the shell of a human my father occupied. Since I was seventeen, we were the same height, but he always had fifty-or-so pounds on me. In his last weeks, the spectrum shifted and I suddenly had fifty pounds on him. Over five days, I tried to muster up the courage to say what I wanted. On the morning we left, I realized that I didn’t care to talk about the past. Those last moments were all that mattered.
I waited until my stepmother and brother left to load the car before I stepped up to my dad and asked, “You remember how you said now was the time to get everything off my chest?”
He nodded and looked ready to receive years of grief at once.
I knew this was the last face-to-face conversation I’d ever have with my father. I forced myself to smile through the sadness. “I’ve got nothing. I forgive you for everything…”
I meant it. It took me five days to realize that I had forgiven him the moment I arrived.
Both my mother and father have separately recounted a ritual that he and I shared when I was in my toddling years. Whenever he left the house without me, I would grunt to him and hold out my index finger. He would smile, say his goodbye, and poke my finger with his.
Before I walked out the door to leave for my bus, the last thing I did with my father was say a goodbye, tell him I loved him, and point out my index finger. Without hesitation, he poked it and said, “Goodbye, Ronnie. I love you, too.”

“One little boy, one little man.
Funny how time flies.”
Tears For Fears—“Head Over Heels”