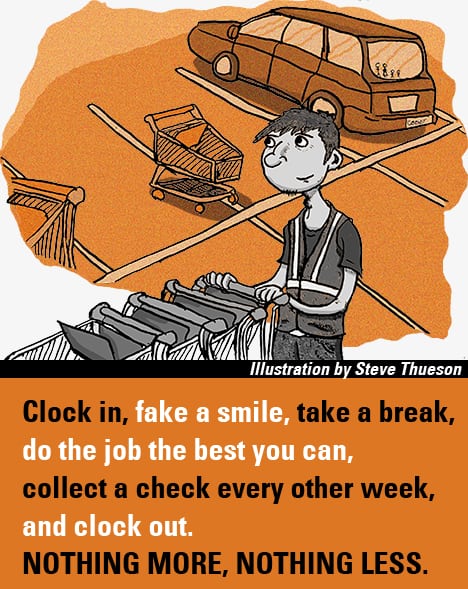 I work for a grocery store chain. I won’t say which one for the sake of staying off its internet troll radar. Chances are, you’ve been in one if you live in Southern California. This particular store encourages the employees to learn every facet of the store and then peppers the daily schedule with a grouping of tasks. The entry-level group is what I like to call an RG, which is shorthand for “Regular Grunt.”

The RG does the simple tasks: checkout, bagging, item stocking and facing, and cart collecting. Cart collecting is my favorite. There’s a Zen involved with how it’s done.

Cart collecting has a philosophy and psychology to its practice.

People are interesting. And when I say “people” what I mean is the general population represented by whatever demographic my store provides food for. This sample was taken over the last five years across three different parking lots.

This is a truth I think many Razorcake readers would agree with.

There are a number of corrals designated for carts. It keeps the parking lot from being cluttered with single carts strewn about and allows employees like myself to walk up and collect a large number at once. Aside from a white sign, there really isn’t anything telling people to put them there, they just do it. Sometimes, a maverick will look around and decide that the empty space next to his car is where his cart should go. This is when chaos takes over.

Once people looking for a cart corral see one stray cart, they begin leaving their own carts near their car instead of the corral. It’s amazing. Leave that parking lot unattended for ten minutes after that first cart and you’ll notice more strays than corralled carts.

This is the first Zen lesson: Collect stray carts first, and the parking lot remains in harmony.

Remove every stray cart and, amazingly, the carts start finding their way into corrals again. It relieves some level of stress for everyone. Without the sudden realization that carts may be abandoned anywhere at any time, people will put their groceries away and automatically push their cart to a nearby corral. Without carts taking up just enough space in any given parking spot, people are free to park comfortably. These are little things, but they are the things that happen both first and last in any given shopping experience. Those impressions are what stick the most. (This could, or could not be a metaphor for life in general…)

They say that idle hands do the devil’s work. Walking around a parking lot while looking for and pushing carts takes care of that. And because it’s not particularly cerebral work, you can shut off the brain and just work. The easiest comparison is when people drive. Have you even started the car and then shut it off at your destination without remembering a moment of the trip in between? An hour of controlled wandering outside can have a similar effect.

However, sometimes the brain keeps working. We all have moments when we have shit to think about. Sometimes it could be as petty as a poor customer interaction still burning your ass. Sometimes it could be something personal that’s happening at home. Whatever the reason, sometimes, you just need to work shit out while giving yourself something to do. And, more importantly, something easy enough that it doesn’t require an intense degree of thought.

Zen Lesson Two: Collecting carts can be great for meditation.

People have told me they can’t meditate because there are very few quiet spaces in their lives. Without getting into the argument about finding quiet spaces, I tell them about collecting carts. I meditate for a half hour or hour at a time, in plain sight, surrounded by chaos. Just watch out for cars!

3. Parking Lots Are Not Safe Places

In my column about riding my bike everywhere, I talked about having the humbling respect for navigating an arena dominated by automobiles. My exact words were: “In the battle between their roll cage and my rib cage, the roll cage wins every time.” The same idea holds when working in a parking lot.

I understand pedestrians have the right-of-way when people drive too fast in a parking lot, or aren’t as watchful as they should be, but remember this is a parking lot. That means it’s a named space designated for automobiles. Sadly, pedestrians should proceed with caution instead of vice versa.

This is more advice than Zen: Work slowly and carefully.

I can only work about eight or nine carts at a time. As a rule, I start with six or less and try to pick up more as I walk along. I’ll stop my collection and help people load bags into their cars and then save them a trip to the nearest corral. The main goal, however, is to keep picking up strays as they happen.

The parking lot is uneven in some places. Eight carts is about the length when it becomes difficult to run to the front and use your personal strength to stop the carts’ downhill momentum. Carts don’t have brakes.

It might sound a little dumb, but the carts are an extension of me. I must be in total control of what I’m doing or else someone’s nice Prius gets a new bumper on the company. One might think, “Yeah! Fuck ‘em!” but always know that someone (more likely many people) inside the store will remember that it was my fault. That shit comes around, even if it’s not immediate.

So, moral of the story: keep a handle on the carts at all times. Anticipate the hills. Anticipate that cars may still dart in front of the carts like there are brakes. It comes off as some shit from out of The Art of War, but it’s true. This is a special part of the advice above about working slowly and carefully.

When I have the duty of running carts, I’m given plenty of time to get them all and make sure the front of the store is always full for customers. Working quickly doesn’t do anything other than make me sweaty and frustrated with people for being themselves. Instead, I prefer to get six carts at a time, help people on my way back, and bring in small groups at a time to fill up the front and clear out the parking lot. It always gets done, because I work diligently for however long my bosses want me to.

5. Take Pride in the Work

I know a lot of people who tell themselves that they’ll get paid the same amount either way and use that as an excuse for taking things easy. I think it’s the wrong approach because that’s when contempt sinks in. I know a lot of those same people also take it personally when the company changes things companywide.

Instead, take pride in the work. Remember, with at-will employment, you don’t even owe them a two-week notice when you decide to quit. (But it is professional to do so.) Aside from the benefits package one may or may not have, and the wage paid for services rendered, at-will employers don’t owe their employees anything either.

This means that respect is earned through a silent meritocracy. Those who tend to do their job well and work around the mistakes instead of pointing them out, tend to earn management’s respect. It doesn’t always have to be for a promotion either. Sometimes, it just means you’re the one who keeps morale high. People like working with hard workers who have positive attitudes. Who doesn’t want to get what they’re supposed to get done while having a few laughs along the way?

Pride in the work also pays in dividends when times get tough. When hours or employees get cut, the recognition of that pride will remind the scheduler that those hours are to be cut last. If times get tough, try and find some humor in your job.

With all of that depressing talk about the true relationship between employers and employees, I try to find humor in the parking lot.

The bumper stickers, decals, and signs people display are hilarious. They display that sheep mentality, where depending on what side of an argument one is on, their side is always right and the other side is always the enemy.

Sometimes, the displayed token will become ironic for a moment. Like the driver with the “Coexist” bumper sticker rushing through the parking lot and looking angry for being held up by people crossing the street. Or the number of cars with some form of nature-loving sticker that trawl and idle while someone with a decent parking spot packs up their car and leaves it.

Some people put too much information about their families in decal form. The family in a line-up with the last name above, the children displayed oldest to youngest, a pet at the end, and all of their names underneath. This is the kind of information my mother told me only trustworthy people knew.

To each his own, I guess. I don’t stress too much about it either way.

This is the single most important thing to remember when your job doesn’t have life or death consequences. (Like, say, a brain surgeon.) I take pride in my work, but if for some reason I don’t complete the job the way I was supposed to, it doesn’t kill me.

They’re just carts and they’ll get collected. And when they’re collected, customers will take them out again. The process goes on until the store is closed. It’s like Sisyphus and the stone. And if, for whatever reason, the carts run out in the front, nothing out of the ordinary happens.

The food inside doesn’t suddenly spoil. Inflation doesn’t drive up the costs of bread and milk. The free sample station doesn’t disappear into the ether. Batman’s parents still don’t survive the gunshot wounds. The world doesn’t stop spinning or orbiting.

That isn’t corporate cheerleading. Having fun with your job is the greatest form of sticking it to them. (Notice I didn’t say anything about actually liking the job.) “They” can be anyone who needs “it” stuck to.

Unless you work for yourself, whoever is making the real money will make it (or lose it) with or without you. The best thing to do is to do the job well and remember that any small form of “sabotage” just screws your fellow coworkers. It does nothing to the CEO collecting two or more figures than the rest of you annually.

So clock in, fake a smile, take a break, do the job the best you can, collect a check every other week, and clock out. Nothing more, nothing less.

“Would I ever leave this company? Look, I’m all about loyalty. In fact, I feel like part of what I’m being paid for here is my loyalty. But if there were somewhere else that valued my loyalty more highly, I’m going wherever they value loyalty the most.”
–Dwight Schrute, The Office [U.S.]