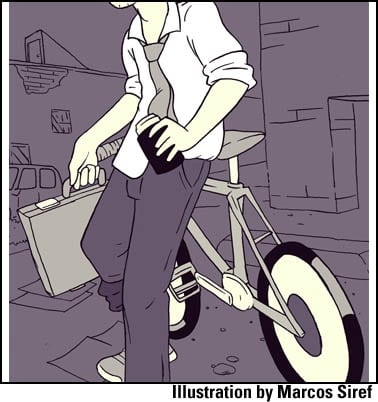 Two weeks passed like a whirlwind and during that time my wife Meg interviewed for and got a new job. I won’t go into the details, but it’s a “big girl” job that comes with things like healthcare, banker’s hours, and the occasional three-day weekend. I couldn’t be more proud of her for surviving a grueling interview process, complete with applications, tests, and conversations with directors and search committees. However, I’ve already digressed.
Meg’s new job comes with a short commute that requires the only car the two of us own. This wasn’t a problem before because we worked together. The whirlwind two weeks ended with a need to decide on a secondary form of transportation for me to get to and from work. After thinking about a high-mileage, cheap used car, leasing a scooter, or buying a good quality bike, I opted for a bike.
It’s been two months since I started riding my bike to get to work four days a week. It’s a six-mile ride each direction with subtle, uneven terrain. I’ll admit that I didn’t look forward to the exhausting rides over four consecutive days. As time has gone on, I’ve felt better and I’m riding faster. I don’t concentrate as much on the burning in my legs or the stretched feeling my chest gets. I even ride on my days off to run errands. This has allowed me to drink in my surroundings more.
Here are some of my observations since I started taking it all in.

Riding a bike in an urban setting is like riding a mechanical steel horse. While I pedal along the right side of the road, hugging the edge of the lane, the automobiles whizzing past me feel like a stampede of aluminum buffalo. It’s dangerous, to say the least. It’s also a bit of a rush. I feel myself lean forward, trying to cut the wind, and I get that look that cowboys have: concentrating on navigating, remaining aware of surrounding hazards, jockeying for speed, and trying not to die all at once.
In this man and machine relationship, the bike is the machine and I am everything else. My brain is the pilot that navigates me through the aluminum buffalo and my legs make the engine that pushes me forward. At the end of the ride, I’m also the primary mechanic to maintain my steel horse, keeping it ever ready for the next one.
From time-to-time, I also wear a bandana across my face, outlaw-style. It’s not to play up the cowboy role I play in my imagination. Instead, it acts as an air filter against the noxious gases the aluminum buffalo are prone to emit. It still looks badass, though.

My Senses Are Getting Sharper

I use all of my senses when riding. Obviously, the most important is sight. I keep an eye on the road ahead of me, while also keeping an eye on the vehicles around me. It’s a defensive driving tactic. I know that drivers are supposed to watch out for me and safely maneuver themselves when around me. I also know that in the battle of their roll cage versus my rib cage, my rib cage loses every time. Even against something like a Geo Metro.
I don’t listen to an iPod when I ride because I believe that hearing is the second most important sense. It’s helpful to hear large vehicles coming up from behind you while riding in traffic lanes, even in narrow bike lanes. When I ride home from work, usually later in the evening, I don’t have much traffic to listen to. From experience, there is something to be said about listening to the stillness of the nighttime.
Funny thing, though, is that being outside of a car when I pass fast food restaurants, it’s amazing how much the air smells of their products. McDonald’s usually reeks of Filet-O-Fish, In-N-Out has the aroma of french fries, Burger King stinks like microwave-enriched buns, and Subway… well, I can’t put my finger on it, but I know a Subway when I smell it.

Drivers, In General, Are Scary

I already said I know about the painful reality of my spongy flesh losing out to the cold, lifeless metal of a car every time. The sad thing is that many drivers are complacent with that fact and drive as such. It’s frightening how some California drivers don’t know how to handle themselves around bicycles on the road. There’s a section dedicated to this protocol in the DMV Driver’s Handbook that every driver should have read before testing for a license….
There is also an epidemic spreading through many drivers. If they own a cellular phone, they’ll likely use it for calling, text messaging, or something else while operating their two-ton vehicle. It’s not just teenagers, as recent public service announcements would like you to believe. Some of these folks are old enough to be my grandfather.
I’ve counted three occasions where a car has almost hit me because the driver had a lapse in attention. All three were stopped at a stop sign with the intention to turn right into traffic going my direction. While checking their phones, they crept into the bike lane the way someone would when paying attention and trying to see further down the lane for safety. Each time, I screamed out, “Hey!” to bring them back to attention. Two of the drivers dropped their hand and looked up at me with the adolescent look of, “What? I’m not doing anything.” The other one gave me the finger as if to say, “What are you gonna do about it?”
I got vindication with the middle-finger asshole. I caught up to him at the next stoplight, knocked on his passenger side window and waved with a shit-eating grin. To top it off, he spun the tires on his Ford Focus the moment the light turned green.

Drivers Are Also Funny To Observe

In college, I majored in English and minored in psychology. At first, the psychology thing was just a cheesy way for me as a writer to get into the heads of characters I created. Before long, I became fascinated with personality and human cognitive development. One aspect I really enjoyed were the behaviors people displayed in the case studies. My personal favorite is the Stanford Prison Experiment. (Recommended reading if you’ve ever wondered how normal, everyday Germans could separate themselves into Nazis and undesirables.)
I watch drivers when I ride. They tend to look at me like I’m crazy because I’ve separated myself from the status quo. The black asphalt is almost exclusively for motorized vehicles, and yet I go against the grain with a vehicle powered without a combustion engine (or electric, in some cases).
Inferiority complexes surface when I accelerate my bicycle into an intersection as the light turns green. If I’ve beaten any vehicles off the line, drivers tend to push down harder on their accelerators, revving their engines in first gear. It’s vital that my two piston, one manpower bicycle shouldn’t outperform their four-to-six-to-eight cylinder vehicle measured by the power of horses. Ever.

I’ll start this section by saying that I know that I can’t possibly look cool while I ride to work. I roll my right pant leg up like a mid-‘90s gangsta, revealing a high, white crew sock. I wear mesh New Balance running shoes (not for looks, but for comfort while working). Then, on the top of my head is a red helmet. I know helmets seem like the smart idea when riding in lanes of automobile traffic, but many people in my city don’t wear any protective equipment while they ride bikes.
That being said, I ride to work at around the time of day that kids get out of school. On my way, I pass an elementary school, middle school, high school, and community college, in that order. The little elementary school kids don’t give me any guff. The high schoolers either mind their own business, or are too self-involved to care that someone is riding a bike near them. Middle school kids, however, are the worst. Unable to drive, they walk in packs along the sidewalk and yell derogatory remarks at me. They haven’t yet developed that teenage insecurity that comes with the need for acceptance from peers and the fear of rejection in romantic endeavors. What they also haven’t learned is the movements of sound frequency from a stationary object toward something moving. I know they’re saying ignorant shit like, “Faggot!” What I hear when I whiz past, though, is something like “AAAAguh!”
Community college students have the advantage of being able to drive. I know they yell at me with the same idea in their minds as the asshole who flipped me the bird. Safe in their much faster vehicle, there’s nothing I can do when they yell at me. Until I roll up next to them at the stoplight a minute or two later. (I think they forget that the road in front of the community college is littered with stoplights and crosswalks.) It’s hilarious to watch a car full of bros look over, notice I’ve caught up, and then snap their heads away like I was the girl in class who just noticed they were ogling her chest.

I tend to ride hard, pushing myself to get to my destination quickly. I’m not the most attractive person to see afterward. Sweat drips down my forehead and down the bridge of my nose the moment I remove my helmet. When I take my backpack off, I have sweat spots on my back and around my shoulders where the straps sit.
The best remedy for all of this is a fresh T-shirt, a cold beer, and a few minutes of stretching the legs with deep breaths. The first few sips are magic. They taste like the elixir of life. Then, it morphs back into the normal beer taste.

My Thighs Are Toning into Something Like a Soccer Player’s

Too much information? Maybe.

“I started biking to work. Josh does it and he lives a lot farther away than I do. And it also saves gas money, keeps me in shape, helps the environment… and now I know it makes me really sweaty for work.” –Jim Halpert, The Office [U.S. Version]