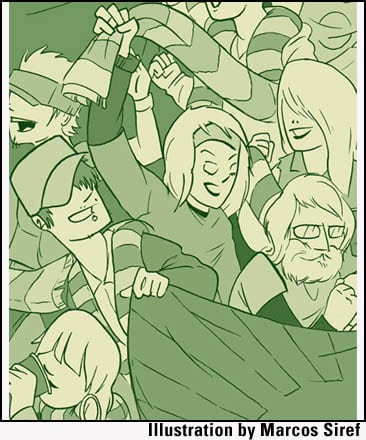 The Gentleman Jackalope: An Unexpected Stop along the Farewell Tour: By Ronnie Sullivan

It was a Wednesday as I walked into my noon-to-eight work shift, just like any other Wednesday—except it wasn’t. With a few keystrokes on the time clock, I began the first day of my last week of work. It was just another part of my Farewell Tour of Portland, Oregon.

At the end of June, my wife and I decided to leave our Portland home and return to the beaches of the Southern California city we left behind. The city is full of youth and the potential for fun, but it isn’t for us. Our time in Portland was shadowed because neither of us fit in with most of the various, eccentric communities around town. It was a lonely two years. So, I called the last few weeks in the city my Farewell Tour, like a music group. It was a final opportunity to see the city with rose-colored nostalgia and leave without a bitter taste in my mouth.

In Portland, my wife and I worked for a grocery store. During the noon hour on that Wednesday, I was assigned to a register that only opens when the store is busy enough. When it’s slow, you’re left to find another way to pass the hour. Some employees choose to go to the back, find boxes of products, and work them onto shelves. I chose to remain up front, bagging and returning baskets from registers to the front door.

While bagging for another register, I noticed the lines stretching out. I finished a bag and moved on to open my register. A tall man was next, so I pointed toward him and said, “I’ll help you over here.” There was something I recognized about him.

At the register, I looked over his face while muscle memory slid items across the scanner. I thought I knew who he was but had to know for sure. I smiled and asked, “So, do you have any plans for the rest of your day?”

He looked around with a coy smile. He leaned in a little and said, “Yeah, actually… I play for the Timbers and we have a game tonight.”

The Portland Timbers Football Club is one of two new expansion teams for Major League Soccer in 2011. However, they’ve existed for decades in lower levels of United States professional soccer. Over many years, the city developed an unconditional love for their soccer club. As the Timbers attracted national sports media attention, their grassroots, rabid fan base, the Timbers Army, have cemented themselves as a part of the team’s identity.

The Timbers Army takes up the entire north end of Jeld-Wen Field, where the Timbers play home games. They stand behind the goal, dancing, waving flags and singing for an hour before the game and during the ninety minutes of play. They end their nights by sending off the team, win or lose, with cheers as they walk into the tunnel for the locker rooms. In short, they are the best group of supporters north of the Rio Grande.

After he admitted he was a Timber, I blurted, “You’re Steve Purdy.” He was, too. The reserve defender and member of the El Salvadoran National Team just nodded, dropping the coy from his smile. I lowered my voice, “I’m a big Timbers fan.”

“I have.” I told him about going to see them play the New York Red Bulls. (Yes, the energy drink company owns the team.) The tickets were an awesome surprise from my wife. She knew that I wanted to watch a live Timbers game before leaving, so she scheduled a stop along the Farewell Tour.

“When are you leaving?” he asked, while I bagged his stuff.

As he handed me a crisp fifty to pay he said, “Well, I have two tickets for tonight. If you can make it, I’ll call them in for you. You should go to one more game before you leave.”

Widened eyes while losing track of counting his change were probably answer enough, but I audibly replied, “Yeah. Of course I’ll go.”

I was left speechless as he waved his hand and walked out. When I regained my composure, I went to the back and told my wife everything. The two of us were going to the Timbers game, an unexpected new stop along our Farewell Tour. Afterwards, we both buzzed with excitement and worried about how we would manage to kill the time remaining in our shifts.

On this Wednesday, though, time moved fast. Something weird within the space/time continuum must have coordinated with my excitement. Before I knew it, my last break came. I left the store to get the tickets.

The stadium is only four city blocks from the store. It only took a few minutes to get there and secure the tickets from will call. On the way back, I stopped off at the Timbers Army D.I.Y. merchandise van and bought a T-shirt for each for us. We planned to go straight from work and I didn’t want us to enjoy the game dressed as grocers.

I also purchased a “No Pity” scarf. Save for the black markets of Craigslist and eBay, there is no other way to find this particular scarf but to seek out the van. One of their credos is, “If you want to be Timbers Army, you already are.” However, they believe that personally handing over a scarf (as opposed to online shopping mail order) is one of the purest forms of initiation. As the young, tattooed woman handed me the scarf, she smiled warm and said, “Welcome to the Timbers Army.”

I can’t explain it, but I believed her to be sincere.

“Thanks,” I said. I stuffed the swag under my arm and walked back to work.

The game started at eight, the same time we got off work. We wasted no time in clocking out and buying a thirty-two ounce Ninkasi Radiant Ale each. In the back, by the trash dumpsters, we popped open our beers and slipped them into paper bags. Over the four city blocks, we walked while drinking. Before entering the stadium, we dropped the two empty bottles into a trashcan. When we took our seats, the game had been going for nine minutes. The drunk started cresting over our brains.

We settled in to watch the friendly exhibition match between the Timbers and English Premier League side West Bromwich Albion. There wasn’t anything at stake between the two other than the pride of winning a game. The Timbers Army, however, did not receive that memo. I turned to their side of the stadium to watch as they chanted almost four thousand strong.

The magic hour of dusk settled, with the two teams battling on the artificial grass below. The Timbers Army created an iconic scene with the primary chant of “P-T! (clap, clap) F-C! (clap, clap)” echoing across the pitch. This is what makes Timbers games at Jeld-Wen Field so beautiful. United States Soccer legend Alexi Lalas recently compared the stadium’s unmistakable atmosphere to Boston’s Fenway Park. I have to agree. I think Steve Purdy does too, considering he felt the urgency to see I had one more experience before leaving Oregon. If you’re a soccer fan in any capacity—even the snobs who only like “European football”—you should find tickets to at least one game.

Our seats were with people related to Timbers players in some way. We sat next to an elderly black gentleman, who I assumed was a player’s father, and a small group of children with him. The section was on the opposite side of the field from the raucous Timbers Army. At first, my wife and I just listened, trying to learn the words. By the end, we were waving my scarf and singing with the group next to us.

The game’s ending was a heartbreaker. After ninety minutes of high-energy play, a West Bromwich Albion defender ran from nowhere to control the ball and strike it in for a goal. It took the collected breath from the stadium when the referee blew the final whistle seconds later. An ominous silence fell over the crowd as they started filing for the exits.

We didn’t let the loss get to us. Instead, we took in one last view of Jeld-Wen Field as Portland residents. On the turf, the Portland Timbers were standing in front of the Timbers Army, applauding the efforts of the north end while Peter Lowry and Eddie Johnson raised their log slices. (When the Timbers score, the lumberjack mascot Timber Joey cuts slices from a log located in front of the Timbers Army and presents them to the goal scorers after the game. No joke.)

When we left, the Timbers Army was just finishing its last songs. The elderly black gentleman patted me on the back on my way out, a grin plastered across his face. I don’t think he spoke English because he kept silent and offered a thumbs-up. I gave him a thumbs-up back, and started up the stairs.

In that moment, I felt a renewed sense of community. Before that Wednesday, I stopped trying to wedge my way into groups of people. That day, though, an entire community found me in the form of a six-foot-four athlete buying his pre-game meal.

Now, I’m a proud No Pity scarf-waving recruit for the Timbers Army.

I coasted the four blocks from Jeld-Wen Field to my car, with my wife and me talking about how awesome our night was. When I drove onto my freeway on-ramp, two buildings blocked my view of the stadium’s white lights dancing in the overcast clouds. The city below looked the same, but it wasn’t for me. I didn’t regret my decision to leave. Instead, I found happiness in knowing that the Farewell Tour succeeded. I wouldn’t leave Portland bitter.

It helped to sing Timbers Army songs all the way home.

“There is no pity in the rose city.”
–Timbers Army chant