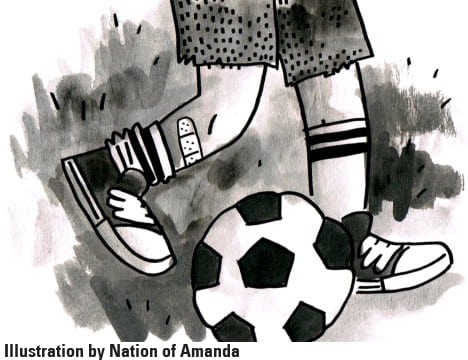 The Gentleman Jackalope: A (Very, Very Short) Life in Soccer

I caught the soccer virus in 2010. I’ve read books and articles about the sport and watched dozens and dozens of games ever since. I’ve purchased a few soccer balls to kick around behind my apartment, while on lunch breaks, or playing with my dogs at a park. The virus spread through my body and took over my brain.

My wife finally pushed me to get out and find a way to play with other soccer people. Uncomfortable with the idea of jumping into a city recreation league, I signed up for a soccer instruction course at the local community college.

The women’s soccer coach teaches the class, which calls for separating into small teams and playing pick-up soccer games. Nothing fancy, but I think the experience has been more humbling than a recreation league. Three-quarters of the class are eighteen-to-twenty year-old girls who already play for—or will try out for—the college. If I had masculine pride to damage, sucking at a sport in front of pretty, young girls would do the trick.

Luckily for me, I don’t think I’ve met a nicer group of girls. I’ll admit they’re intimidating at first. Most of them have played with and against each other since they were kids, so they can be a little intense with each other. However, they recognize I’m there to have fun, improve, and maybe get into shape. So, they’re good about telling me to brush off mistakes and showing me how to fine tune techniques. It is a little strange, though, when you hear one of the girls say something like this:

“Casey! You have the right flank,” she said pointing to the sideline with a stern finger. “Watch for AJ! Stop the cross! Backbackback! Turn! Clear!” Then, she calmly turned to me and said, “When I say clear, just kick the ball outta here. Now come forward a little and keep an eye on Mindy there.”

My wife reminded me that at first I probably wouldn’t be all that good, but it’s the only way to get better.

The last World Cup took place in 2010 and, at the time, soccer was abuzz everywhere I went. Living in Portland, the locals were stoked for the Timbers. Well, they’re always stoked, but this was different because the club had been promoted to Major League Soccer for the next season. The New Yorker ran a huge article about U.S. goalkeeper Tim Howard. Co-workers sat in the break room talking up the ridiculous talent on Spain’s team. Hell, even my favorite Razorcake writer dedicated his column to personal experiences with the World Cup. (He, too, talked about how unstoppable Spain looked.)

When something kinetic pushes me, I can’t ignore it and tend to just go with it to see where it takes me. With two days off and a sleeping schedule that had me awake for a seven AM kick-off, I gave in and watched the much-hyped match between the United States and England.

I was a soccer-ignorant American. I was both fascinated and annoyed by the vuvuzela, wondering why players and fans alike would endure an environment that sounds like a beehive. (They normally don’t. It’s a South African football tradition.) During the match, I spent more time than I should admit wondering which player David Beckham was. (He wasn’t even on the squad due to injury.) I watched Clint Dempsey score the only goal for the U.S. and decided that even though I’d never heard of the guy, it might be possible he didn’t suck. (He’s arguably the greatest player the United States has ever produced.) Then, when the match ended in a draw, I sat uncomfortably through commercials, wondering how I should feel about it.

Whatever I felt wasn’t enough for me to change the channel. I watched the coverage and analysis on ESPN, and they hooked me into watching the next game. It was Argentina and Nigeria, two countries I knew little about. However, the experts at ESPN seemed excited about the opportunity to see the short Argentinian phenom, Lionel Messi. (For those out of the know like I was, a Google search produces about ninety million results to inform.)

The World Cup was fun, but after ten days and over a dozen matches, it felt like the Olympics. Nothing stood out as a reason to continue following soccer until the next World Cup came around. Then came Landon Donovan and the Algeria Moment.

The United States and Algeria were locked in a match where the U.S. needed to win to advance to the knockout bracket. There was a tension inside of me that started coiling with the kick-off and continued to wind with every minute. I can’t explain why it was there, or why I had it. I started to agonize over errant passes and found hope in every cross into the goalkeeper’s box. Like Bart Simpson in “The Crepes of Wrath,” where he “studies” abroad in France working for a cheap winery, just when I thought I had learned nothing all that time, I realized that I picked up the language. When only two minutes of extra time was called after ninety minutes of a deadlocked 0-0 score, the tension wound inside of me maxed out.

Then, Tim Howard made a stop and quickly started a counter-attack by throwing out to Donovan in the midfield. With a perfect first touch, Donovan turned and sprinted up field. Edson Buddle, Clint Dempsey, and Jozy Altidore ran up ahead of Donovan to create attacking options. Donovan chose Altidore, and Altidore crossed it in quickly to Dempsey, who kicked a side-footed finish that bounced off the goalkeeper. Like he knew it would play out that way, Donovan ran a straight line from the back, and met the rebound with a swift kick to the back of the net.

The onlyway to describe what happened next was that I lost my shit. After running in circles a few times and using “fuck” in a variety of ways like “Are you fucking kidding me?!” and “Fuck yeah!” I was hooked. Not just to the final minute of play, but to the Beautiful Game altogether.

It was a significant transformation.
I grew up with a father figure who takes the view that soccer is a reason to riot. (He also believes hockey is a reason to fight.) Many of the friends I had came from families with similar views. My neighborhood was predominantly black. I grew up playing basketball most of the time. I watched my first soccer matches during the 2002 World Cup games, broadcast live at ungodly midnight hours from Japan and South Korea, because I was hanging out a lot with a girl who watched soccer. I only found out about the 2006 World Cup because a different girl I fancied unknowingly booked her trip to Paris when France lost the final to Italy. (Like many, many men, I’ve done several things in my life, with good and bad outcomes, because of women. That’s a column for another day, though.)

After the hook, my experience with soccer and the World Cup became different. My learning curve took a sharp turn upward. I experienced the shock of France’s exit from the tournament, bringing new definitions to the word “egomaniacs.” Despite their chances being slimmer than the United States, I rooted for the host South Africa until their elimination. I kept my eye on Spain because so many people told me to. For the rest of the 2010 World Cup, I tuned in with the rest of the world community. Together, we watched for hours as the best soccer players battled in meaningful games. One by one, nations were eliminated. In the end, everyone was right. Spain won the whole thing.

It didn’t end up being like the Olympics. I became a soccer fanatic. It began with supporting the local Portland Timbers Football Club. Then, I started waking up before the sun on weekends to watch live matches from England. I bought and got addicted to playing FIFA 11 for the Nintendo Wii. During the 2011 Women’s World Cup, I took four (FOUR!) cigarette breaks in two-and-a-half hours to catch five-minute glimpses of the final between the United States and Japan outside of the sports bar next door. (Normally, if I smoke, it’s one or two usually after a few drinks.)

And that was just the beginning…

In 2013, I walked onto the artificial grass surface at Ventura College and laced up the cheap pair of cleats I found at an outlet store. When the instructor divided up the teams, the girls started workout positions. Without really knowing what I was doing, I opted to play defender. The teams were six-a-side, so there was only one other defender working the opposite side of the field.

The games started. My nerves subsided with every passing minute. The game is very simple: kick the ball to score goals, don’t use your hands, and keep contact minimal.

Midway through the game, I relaxed and really had fun. I discovered that the game I love to watch is also one I love to play.

After holding my zone for most of the game, I found myself one on one against one of the girls. By that point, I noticed that she was very smooth with the ball, but she didn’t shoot much. I ran to the space in front of her, cutting off most of the easy angles to kick the ball out from. I watched her line up for a cross into the box and my instinct took over. Without fear, I jumped up and stuck my neck out to block the ball with my head. It ended up being my face.

The ball bounced off of me and out of bounds for a corner kick. I shook my head and turned around, walking to the goal. The girl called out to me, “Are you okay? Where are you going?”

I gave her a thumbs up and pointed to the goal post, “I have to watch the near post.”

The game went on like it should until the class ended. I learned that even when the game hurts, I still love it.

Now, getting into the shape required to run around for long periods of time… that’s whole different thing.

“This is a sport for young girls in this country!”
–Jim “Mad Money” Cramer, addressing his opinion on the state of soccer in the U.S. to French superstar Thierry Henry upon his arrival to play in New York.