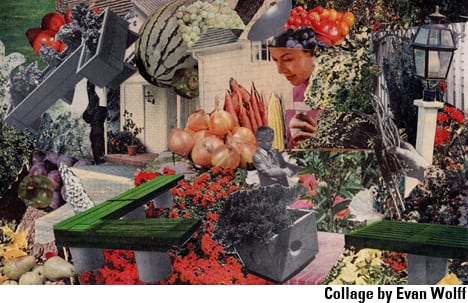 This would have to be someone’s first visit to Razorcake.org to not know that our own Ingenious Gentleman of Cocoa Beach has a new book out.

(If that’s the case, then welcome to the site! Razorcake co-founder Sean Carswell’s fifth book, Madhouse Fog is now out from Manic D Press. It’s available through several online bookstores.)

This is a book review masked as a regular column. Shhh, it’s not a secret.

To be brief, this book is so good that I recommend it be bought and read twice.

Now, for the longer review.

Carswell’s new novel contains the four elements of theory that I believe are integral to any successful story: stakes, motivation, twists and turns, and escalation.

I have a degree in English/creative writing. It’s a common misconception that classes are just students scribbling poetry and prose, and then they gather in circles to share them.

Don’t get me wrong, that does happen. However, most of what English students do happens between the lines.Underneath those stories and discussions is an education in story theory.

While we would all sit around talking about liking this and not liking that, what was between the lines was the theory.

Stakes and elevation: This is exactly what it sounds like. What’s at stake? Before the stakes elevate, they’re usually easy to grasp. In an action movie, a character’s stakes might be life or death. By the end, things escalate to livesor mass destruction. In a romance novel, a character’s stakes could be love or loneliness and then elevate to destiny or despair.

Motivation: What makes the character faces the stakes? In the action movie, it could be stopping a potential attack on innocent lives or simply death. (It’s a powerful motivator.) In the romance novel, the motivation might be to turn around a personal rut, to get family or friends to leave them alone, or simply a want of love. (Another powerful motivator.) In story theory, discovering a motivation is usually what guides a typical three-act story into the second act.

Twists and turns: This is a time when—if everything went right—the story could end, but instead something comes up and ratchets the tension. Stakes are usually elevated. Third acts typically begin with a twist. In the action movie, this is the part when the hero kicks open a door for the final showdown with the villain only to find them holding a gun to a loved one’s head, or the room is empty except for a bundle of dynamite complete with a timer and a note that says, “Maybe next time, Action Hero’s Last Name” (And the stakes elevate from the hero’s life, to numerous ones.) In the romance novel, the protagonist is about getting the guy or girl when a former lover reappears, or another character gets asked to the high school dance first. While I haven’t mentioned them, twists and turns are the most important part of horrors and mysteries.

If a story doesn’t feel right, most of the time something went wrong with one of those four story elements.

This explanation has been long, but important. Carswell navigates through Madhouse Fog with those four points hitting masterfully. I have to stress “masterful” because the difference between a good story and a great one is how the story gets set up.

It can be a downer sometimes when you watch the act breaking the set-up in the beginning. The story becomes predictable, and at the end could feel like a waste of time. Who wants to watch Titanic if they already know the fucking boat is going down in the third act?

However, it’s great to bring up that another good story feature is the ability to make a typical plot interesting. (Hint, it’s characterization.) Romantic comedies are essentially boy gets girl movies. Mysteries are whodunits. Character work separates good ones from bad ones. Why are you rooting for the couple to get together? What is it about the antagonist winning that breaks your heart? Usually, it’s the way a character is portrayed that determines how people feel about them.

The characters of Madhouse Fog are very personable. The way their contrasts play off one another creates a small ensemble where you care about the wants of secondary characters. When a story can create empathy for characters beyond the main ones, the story feels more real. Another downer is getting to know a really cool main character and their crew of cardboard cutouts.

Carswell also took a leap of faith with this novel. He admitted on his website to not writing with an outline nearby to guide his characters. The philosophy behind it being that a reader would be left more in suspense about how everything will end because not even the author knew along the way.

It worked. With thirty pages to go, I had no idea how everything was going to go down.

Now, I like to take stories apart and rebuild them like a bicycle. I like to mess with experimental writing styles the way a guitarist will mess around with different tunings. And, much to the bane of a good writer like John Gardner, I enjoy when writers take a plunge into metafiction.

There is a blurry space between the fiction that is a realistic story told against the backdrop of the “normal” world and science fiction. That space is metafiction. It requires some suspension of disbelief, but ultimately the story remains grounded in the physics of “normal” reality.

Carswell did well to navigate his novel through the blurry space and come out the other end with a Haruki Murakami novel.

That’s not a bad thing. Murakami is one of Japan’s most successful writers, and his work is brilliant in how he bends reality enough to keep things believable. A strong example of his work is The Wind-Up Bird Chronicle. Also, his short stories offer bite-sized examples.

The metafictional part of Madhouse Fog is why I recommend reading this book twice.

The first read through should play out like a movie, where the twists are surprising and the payoff feels satisfactory. Then, the metafiction plays a serious role in the second read. First, you can watch Carswell’s subconscious figure its way through the plot. Then, if you’re astute to what’s going on from the beginning, you can read it as the main character’s story as seen by a secondary character.

A metafiction joke is made in the book, too. When the main character describes his office, pay close attention to his book collection. It’s very subtle, so I won’t give it away…

To start, it’s a loose, westernized three-act structure. Act one is a mundane beginning surrounding a lonely male protagonist. Life is usually boring, and they like it that way until the introduction of the stakes starts to rock the boat. Act two is the protagonist’s motivation to keep everything normal, but ignoring the problem only makes things worse. During the second act, the protagonist meets a secondary character (usually younger and female) that has the ability to talk the protagonist into shit they wouldn’t do otherwise, like meditate down a well. The twist that ushers in act three raises the stakes, and the “normal” world is revealed to actually be a bat-shit crazy mirror of the real world. With the end close in sight, the reader won’t know how it ends because the plot threads still won’t have begun tying up into a nice bow.

That is the Joseph Campbell story wheel for a Haruki Murakami novel (and also Madhouse Fog).

This book has one of my Top Five Favorite Villains of All-Time. That’s saying something because the bad guy in Madhouse Fog is both blind and elderly.

I’m a fan of villains who are unrepentantly evil. They’re difficult to write, but if done properly often steal the show. What makes them difficult to write is that often, their only motivation is to be evil. It can be unsatisfying, like when you ask a child why they did something and they answer with a shrug, “Just ‘cause.”

Pure evil souls are compelling to root against when their evil serves as a foil to the goodness of the character. For an example, I’ll look at how the two in Madhouse Fog handle their closest relationships. For the main character, it’s a puppy. The protagonist takes in a strange and helpless non-human, and the two start the process of healing the wounds of a failed marriage. Meanwhile, the only known relation to the villain is his misguided nephew, paid to be his muscle, and thus treated like an employee instead of family. One character has a compassionate connection toward all living beings. The other sees everything as a commodity to be bought or sold.

Now, this book doesn’t come without a blemish or two.

First of all, it’s dated. The main character names his puppy Clint Dempsey, who scored the lone goal for the United States in the entire 2006 World Cup tournament. There’s a point in the novel where it’s explained that Clint Dempsey currently played for Fulham FC in England. When the novel released, Dempsey had just finished his lone season with London’s Tottenham Hotspur. Currently, he sports the radioactive piss green—whoops! I meant “rave green”—of Seattle Sounders FC.

There is a casualty of meandering through this story without an outline. I don’t want to spoil who it is, but there is a character that shows up in the first act. Her interaction with the protagonist led me to believe she might become the Murakami-style secondary female character. Instead, she disappears right before the story breaks into the second act.

An easy solution for this is to see her as a metaphor for all the mistakes the protagonist made in his youth (specifically as a twenty-something in the ‘90s). Her disappearance at the end of the first act could signal that the protagonist decided to leave the past be and move forward instead. Of course, what probably happened is that as the world of Madhouse Fog took shape, her character just didn’t fit.

Another character has a storyline that doesn’t really get closure, but that’s a major part of the story that I can’t give away. My only advice for getting over that lack of closure is to read about Schrödinger’s Cat.

See? This book is so good, I’ve nitpicked a couple of things for the sake of reviewing something negative.

I’ll conclude with this: Pay careful attention to the main character’s name. It’s mentioned maybe three times, but if you piece together the first and last name it’s amusing.