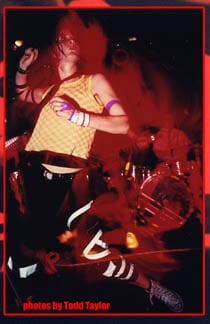 I'll rip off the sentiment of our own Rev. Nørb. The Epoxies have done what I wished more new wave bands had done the first time out - made a fucking great album from start to finish. If you, say, cherry pick Missing Persons' catalog into a singles collection, it's comes down to a mostly-miss situation made by people with tall hair and frilly socks. Not so with the Epoxies. Their duct-tape as fashion statement shtick has a lot more slap than the empty gesture of sucking up the debris of a good-reason-it-almost-completely-died genre. The Epoxies learned what made the skinny-tied legions of new wave hit a wall. Thankfully, they steered way clear. Evidence: cool tough can be obtained through snarling up the guitar, making the drummer not a machine, slithering A+ songwriting, and having a front woman who isn't just sexy and lithe, but can belt, croon, yodel, and play hockey. Razorblade slashes and android vaseline kisses await.

Todd: Being that you're inventive - you've fashioned lasers into your hats with Chapstick caps, and constructed a violent bubble machine - what would you do to improve the skateboard or skateboarding as a whole and what do you see as the next breakthrough material?
Viz: I was thinking that if they were high off the ground, like a couple of feet.
FM Static: With a lot more wheels.
Shock: I was thinking no wheels, but that's fairly obvious.
FM: If you could make them six or seven feet across and a lot longer, you would be way less likely to fall off it, which seems to be a big problem in skateboarding from everything I can tell. Also, more flat stuff to ride on.
Viz: More concrete.
Roxy:: Softer concrete. Spongy sidewalks.
FM: I think it might be a question of not improving the skateboard, but improving the environment we live in to adapt to the skateboarding. Or improving the skaters themselves. This is where genetic engineering would be appropriate. People with wheels for feet and no joints, because those seem really vulnerable, too? I've been watching all this half pipe stuff. I think it's time for the full pipe.
Todd: They have those.
FM: Well, good. We need a zero G's full pipe - or even further, like a sphere you could stay in. Just open a hatch, maybe from the bottom.
Roxy: Maybe it spins on its own and you just have to keep up with it.
Dr. Grip: Like a hamster ball.
FM: Put the sphere in a half pipe or on the top of a hill.
Shock: A big, giant funnel would be cool.
Todd: What was the last trick you pulled off skating? 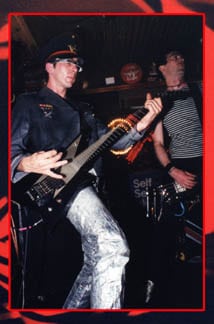 Shock: Pulled off? There's a reason I don't skateboard anymore.
Roxy: Falling.
Dr. Grip: Breaking my collarbone. I pulled that off magnificently well.
FM: I did the 350 Superman face grind while skating with my amp one day.
Todd: But Roxy, you played ice hockey, right?
Roxy: Oh yeah, I guess I do know how to skate after all. It's pretty interesting how word gets around. I play defense although I can fill in as a wing if needed. I haven't had a chance to play for a little while because I've been so busy - yes, I am having withdrawals - but I started playing about four years ago after the Portland Winterhawks won the Memorial Cup. I figure anything that involves strapping blades to your feet and a stick in your hand is worth learning, but regardless of blades and sticks, it's a great sport.
Todd: Ever body-check someone against the glass?
Roxy: The leagues I've played in are non-checking leagues, but, yes, I've taken out a few people and ended up in the box as a result. Hey, I was just trying to do my job as defense?.
Todd: Have you ever had so much stuff on when you're playing that you're choking yourself?
All: Yes.
FM: Microphone chords seem to be a popular one in that respect.
Viz: Video tape.
Dr. Grip: That didn't work out too well.
Shock: It was more laceration than strangulation.
FM: It turns out that video tape is really sharp. Who knew?
Viz: I was quite bloody by the time I was done.
FM: Not to mention Roxy's hair, arms, legs, thighs, ankles?
Todd: Have you ever taken off your clothes and realize you've cut off the circulation?
Viz: Scissors are really handy.
Roxy: I was more afraid that I wasn't going to be wearing enough at times. Duct tape tends to lose its stickiness with sweat. There was a breast scare at one point.
Todd: Explain.
Roxy: I had to just make sure I was erect [gestures to nipple] during this show or else it was going to slide down and expose breasts.
FM: Whereupon everyone else would become erect.
Dr. Grip: It was a small outfit.
FM: There were no straps.
Roxy: It was pure duct tape. Sold out crowd. Lots of people to see breasts.
Todd: What are some aborted costume ideas?
Dr. Grip: The cardboard box and dryer hose robot with silver spray paint never came to pass.
FM: Those haven't strictly been aborted so much as shelved like the Christmas-lights-all-over costume, thus far, for fear of electrocution.
Viz: The laser pants.
Shock: They're financially trying. Hopefully, sometime soon. 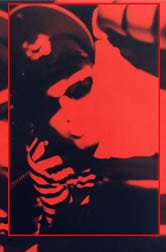 Todd: Laser? How? Lasers fashioned in the pants?
Viz: Basically covered.
Roxy: The all-duct tape outfit.
FM: I've pretty much done that.
Roxy: Yeah, but you haven't put it on your penis yet, so we're still waiting for you to just walk out with it.
Shock: Not that you've seen.
Roxy: True.
Dr. Grip: That's a little too Red Hot Chili Peppers. Then, we're going to have to talk about saline injections, to make the testicles really large, and shaving. Apparently, it's true. You can inject your scrotum, mainly, I believe, with saline solution to make it really large.
Todd: Your entire sack?
Dr. Grip: Basketball size?
Shock: So I've heard. I haven't actually tried it out yet.
Todd: That would make your cock look smaller, wouldn't it?
Dr. Grip: It doesn't matter. It's a testicle fetish.
Todd: Ahhh, gotcha.
Dr. Grip: It ceases to be a T-bag and more of a T-ball.
Todd: What are you most neurotic about?
Roxy: Alarm clocks, locked doors, locked windows, and fleas.
Shock: I'm too hungry to answer that... maybe not... clones don't eat.
FM: Appearing like an idiot in interviews.
Todd: In some of your lyrics - like in the song "Science of You" - it's boy likes girl songs, but, I believe, from the perspective of a scientist wanting an android. Am I getting that right?
FM: I think your premise is faulty. The point of the song is that the person is trying to utilize science to understand the human condition. He's trying to apply facts and figures and graphs and charts to the subject of winning the attention of another.
Roxy: I like Todd's interpretation more.
Todd: I kind of got an android feel from it, but maybe that's just the synthesizers creeping in.
FM: "Molded Plastic" is more android-y. But, you know, honestly, android works. Frankly, if I'd thought of it and there were androids around, those are the girls we'd be trying to get.
Todd: How's the new clone behaving? (Shock is a clone.)
Dr. Grip: It's been a little touch and go.
Todd: Any new cracks or congenital defects?
Dr. Grip: No, not really. He's very agreeable.
FM: A little more rebooting. He seems to be in order.
Roxy: Although, he has this obscene tendency to try to give all the boys rim jobs.
Todd: Have any other clones tried to infiltrate the band?
FM: [surprised] We're not sure. You're going to make us paranoid.
Todd: Speaking of clones, do you think Alice Cooper would ever put down his golf clubs and join you in your cover of his song "Clones"?
FM: We can only hope.
Dr. Grip: As long as there's a riding crop involved.
FM: And a boa constrictor.
Viz: I think he's probably embarrassed about that song at this point because he's kind of metal now.
Todd: He owns a rock/jock baseball-themed restaurant in Phoenix.
FM: I know he's a really avid golfer, but I didn't know he was participating in music at this point.
Viz: I hear he drives around in a big, giant pink dump truck.
Roxy: Well, if he's got that, he doesn't need to join us in "Clones."
Todd: Has anyone from the crowd tried to have sex with you in a bathroom stall after a show?
Roxy: No, but I did get groped the other day. That was outside the club, though.
Todd: I have the sneaking suspicion, Roxy, that you didn't write all the lyrics to "Bathroom Stall."
Roxy: I wrote half of them. FM and I wrote them together.
Todd: Because I get a very male perspective, but from a female narrative, but that's just from listening to the record.
FM: That's because we're androgynous.
Dr. Grip: That's FM's sensitive side.
Todd: The songs on your self-titled album sound seriously fun and bouncy as hell, as is your live show, but the lyrics are often paranoid, full of desperation, and cold anthropomorphism. Why so?
FM: We're fucked, let's dance.
Todd: Why?
FM: Because we are fucked, for God's sakes. Where do we even start with that? The whole world is coming apart at the seams.
Todd: If that's your attitude, why isn't your stuff more gloomy?
FM: Because we're too despondent to change anything.
Roxy: Might as well have fun for now.
FM: We're kind of like mutants trying to make the best, living in the ruins of a post-atomic world. There's no politics in there because it's too late. So, what are you going to do? Escape.
Roxy: Enough people are on Prozac now. They should be able to enjoy music.
Todd: Thematically, what's the band's goal? Servotron wanted to kill all the humans. Poison wanted to get laid.
FM: Poison humans. Fuck robots.
Roxy: That's what I was kind of thinking.
Dr. Grip: And dance.
Roxy: While fucking the robots.