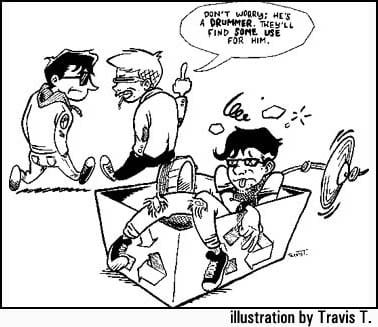 The Doctor Will See You Now…: Dr. Strange's 1st Column

Man o’ man, my wife and I just saw the most depressing movie  ever: An Inconvenient Truth. For those of you not familiar with it, An Inconvenient Truth deals with the topic of global warming. Now I know what some of you are saying right now: “Come on, that’s a bunch of crap. It doesn’t exist.“ I have an answer for you but you’ll have to read on to see what it is. Anyway, as I was saying, this movie talks about, in a classroom lecture format, the overwhelming evidence of global warming and what it can mean for us: death to human life and most of animal life on earth. If that isn’t something to get up off your ass and actually care about, now is the time for you to go back online and “chit-chat” with your Myspace friends. But for those of you who give a shit please read on…

After leaving the theater, my wife and I both felt a little empty or maybe helpless inside. At least I did. What can I do to help? What can one person do? What’s the point? Well, I’ll tell you what one person can do. Nothing. Not a damn thing, really. But we can’t think in those terms. When faced with such an overwhelming dilemma such as mass extinction we need to think in “extremes.” After all, it wasn’t just one person that got us into this problem.

Planet earth has about 6.5 billion people on it right now and you can really only be responsible for one of them: you. Only you can make a change about the way you do things. Only you can say, “I am going to do something, no matter how little it is. At least I’m going to try.” And if enough people feel the same way, that one person is now many. That is exactly the attitude that got us here: “Ah, it’s no big deal if only one person dumps his oil in the street.” Or, “What’s the harm if I don’t recycle? My neighbor does.” The examples of laziness are many. The thing that frustrates me is the fact that it’s so fucking easy to do “the right thing.” In many cases, it’s actually easier to do the right thing then to continue to destroy our environment. I guess bad habits are hard to break.

Now here’s the part I spoke of earlier for those (few, I hope) people out there who don’t believe there actually is a problem. Let’s say if only half of what they say in this movie is true. Actually, I’ll do you one even better. Let’s say not one point is true. There is no “global warming.” It’s all a set up from “someone” or “something.” Who that someone is and what their sinister goals are I’m not sure, but I bet you do. (By the way, now is the time to re-wrap that foil on your head so they don’t hear your thoughts.) My question is this: in either case, what is the harm if we, the human race, actually do try to come up with better cars? What is the harm if we recycle and re-use more or think more about over-population? Is any of that bad? At the very least, more efficient cars (hybrids) will lessen our dependency on foreign oil (less wars will be fought), create a whole new business for the failing auto industry (are you listening Ford, G.M?), and create more jobs. Recycling actually makes money for cities that are smart enough to invest in it. Solar power will save you money. I can’t see anything wrong with this in any case. It’s like someone who was lucky enough to be born being fit, healthy, eats what he wants, and never gains weight. Is it a bad idea if this person still exercises a few days a week?

The truth is, and it’s an overwhelming truth at that, the earth is suffering. It’s a gigantic place but actually very fragile. Very slight changes can make for huge, life-altering disasters. I won’t get into the science of it. All that info is in the movie and online. That’s not why I’m writing this column. I want you (yes you) to at least just think about it. Go see this movie if you can. If not, read up on it.

I honestly think it’s imperative that we do something about it right now. This is not about politics. It’s not the Democrats versus the Republicans. It’s not about ethnicity or borders, it’s about us: The human race. One world and one chance to save it.

On that note, I wanted to give you some examples of things my wife and I do. Like I said, there is nothing difficult about any of these. There’s no reason why we can’t all do something. Just start out small and work your way up. It’s important to think about it and put things into your daily routine.

3)        My wife brings her lunch to work with her. She doesn’t use zip-loc baggies but uses reusable Tupperware instead.

4)        Cleaning out your garage? Don’t throw away usable items in the trash. Donate to a thrift store. Hell, you even get a tax write off for it!

5)        Try not to go to restaurants that only use paper plates, plastic forks, etc. Think about how much trash that adds up to. Remember it’s not just you that eats there.

8)        Call your City Hall (I sent an e-mail) and ask them if your city uses natural gas in the buses. Also, if your trash service does not take recyclables, ask them why not.

10)    Yesterday I dropped off my old cassette deck to get it repaired. The guy said it’s going to cost about the same as if I bought a new one. I still had them fix my old one. Why? Because there’s no need in buying a new one and tossing my old one in the trash with all the plastic and rubber parts. It’s just a waste.

12)     Take public transportation, ride share, consolidate trips or ride a bike. I do my best to ride my bike to work at least once a week and when I do need to run errands I do them all in one day. Cutting back on the amount of times you start your car is one of the most important things you can do.

13)     I went to Office Max to get some copies made yesterday. I had a lot, so I did use a bag to put them in. After I got those, I walked next door to Petsmart to get my dog a new toy. They rang me up and started to put it in a new bag. I said “I don’t need it. I’ll just use my bag.” Wow, how easy is that? Very.

These are all very simple things to do and there’s no reason why you can’t at least try. Once again, think in the extremes. If everyone tried to make a change for the positive, even just a little, that would actually make a difference for the good of the earth. On the other hand, if everyone did nothing, think of the adverse effect it would have each day.

Let me just leave you with this. All I ask is for you to please just think about it the next time you get in your car, or the next time you buy something that is full of plastic and will be thrown away the next day. Just think. Know the consequences of your actions. You don’t have to set out to change the world. Change yourself and the world will follow. It’s now or never…